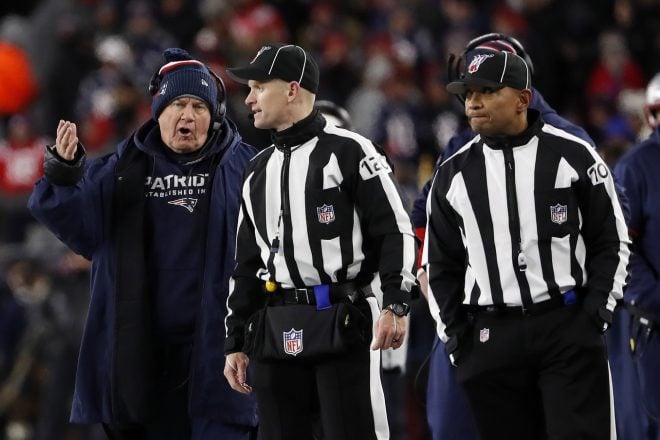 The Patriots dropped their second game in a row getting stopped on a 4th down pass in the end zone as they fell to the Kansas City Chiefs 23-16 in a very exciting if at times aggravating game.

And while fans will point to the truly awful officiating (and it was), the reason they were behind the eight-ball didn’t have to do with the officiating, but we’ll get to Jerome Boger’s crew in due time.

The Patriots had to overcome a bad second quarter where the Chiefs went into halftime scoring 20 unanswered points and then found themselves down 23-7 and in a position where they could have easily been blown out. Andy Reid and the Chiefs offense had figured out what the Patriots were doing defensively and Patrick Mahomes was shredding them in the second quarter.

Meanwhile, the Patriots offense after a nice opening drive was doing a lot of nothing. But they didn’t quit and forced a couple of key turnovers and put themselves in a position to either win or force overtime. And the defense made their own adjustments and held the Chiefs to just three second-half points.

Kansas City’s defense played a heckuva game, they did what I have said I’d do if I were an opposing defensive coordinator. I’d blitz the heck out of Tom Brady because other than Julian Edelman and James White, he has no one he can depend on to make plays consistently. And he doesn’t.

Phillip Dorsett drew one long defensive pass interference penalty, and should have drawn another, but other than that? Zip, zilch, zero, nada. Zero catches, zero yards. Mohamad Sanu had one catch for 13 yards. As we said last week, when your #2 and #3 wide receivers have no production, it is awfully hard to win football games.

The Patriots running game managed just 94 yards against a Chiefs defense that came in allowing 141.3 per game. That is a win for KC. The Chiefs defensive line was pushing around the offensive line of New England all night long. And their pass rush harried Brady on nearly every throw.

Josh McDaniels has been pulling out all the stops and trying to find something that works offensively. On the first drive, they ran a flea-flicker with a very different look as James White took the handoff and ran to the right before tossing it back to Brady. Julian Edelman was wide open and he and Brady connected on a 37-yard touchdown pass that was aided by two pass interference calls on third down.

The Patriots had chances to go up big, they intercepted Mahomes on the third snap for the Chiefs when J.C. Jackson undercut Tyreek Hill and picked it off at the Chiefs 40, but they went backward one yard and two passes went incomplete.

After Mahomes led the Chiefs to a field goal, the Patriots then went on a 13-play, 56-yard drive that stalled at the Chiefs 23-yard line. Nick Folk’s 41-yard field goal was blocked when Tanoh Kpassagnon broke through the middle of the line cleanly and knocked it down. That was the turning point of the game and momentum.

But the rest of the first half was all KC. Mahomes seemed to injure his throwing hand when it looked like he connected with one of his own players’ helmets with the pinkie on his hand. But he made some tremendous plays and had the Chiefs on the verge of a blowout.

Facing a 3rd and 19 at their own 46, Mahomes was under heavy pressure and delivered a 21-yard strike to Tyreek Hill. Then on 2nd and 25 from the Patriots’ 48, he hit rookie Mecole Hardman for a 48-yard touchdown strike. That made the score 10-3.

Tom Brady was picked off on an unusual play on the first play of the ensuing series. Brady was attempting to hit Matt LaCosse down the numbers after he beat a linebacker in coverage. But Bashaud Breeland who was covering Julian Edelman outside on a short crossing route was fooled and kept running deep. He ran right into the play where Brady’s pass was going and picked it off, cutting in front of LaCosse

Mahomes and the Chiefs wasted no time in converting their chance with Travis Kelce taking a direct snap on a 3rd and goal from the 4-yard line, scoring easily making it 17-7.

The Patriots turned it over on downs. And a few plays highlight what has been troubling the offense. On 2nd a 7 from the Chiefs 27, they were showing an all-out blitz. And they did, Brady threw hot to Phillip Dorsett who ran a deep route down the numbers. He has to recognize that and cut his route short. On 3rd and 7, Jakobi Meyers dropped a pass that would have moved the sticks.

Mahomes drove the Chiefs down just before the half with a chance to blow the game wide open. The Patriots defense stiffened and held them to a field goal and went into the half down 20-7.

The Chiefs took the second-half kickoff and went down and kicked another field goal to make it 23-7. It was then that the Patriots defense made their own adjustments and really tightened things up, holding the Chiefs scoreless for the final 25 minutes.

On the Chiefs’ next possession, Nate Ebner burst up the middle and blocked a punt giving the Patriots excellent field position at the KC 19. Two plays later Brandon Bolden ran it in from 10 -yards out and the score was 23-13 after the two-point conversion failed.

During the Chiefs next possession is when the wheels on Boger’s staff came right off. Facing a 3rd and 4, from the KC 35, Mahomes drilled a crosser to Sammy Watkins who was tackled by Stephon Gilmore. The side judge gave Watkins a huge favorable spot at the 40-yard line when the replay clearly showed him catching it at the 39-yard line, very close to the yard marker.

Bill Belichick threw a challenge flag, not only on the spot but asking for an offensive pass interference penalty on Travis Kelce. While the spot may have been a 1st down regardless, the officials ruled that the initial spot was correct. And Kelce clearly interfered with Gilmore. He ran a route about 2-3 yards and stopped and then stuck his ass out which clearly made contact with Gilmore. But both calls were denied by the replay officials. That would come back to haunt the Patriots.

Five plays later, facing a 3rd and 2 at the NE 37, Mahomes hit Kelce on a short crosser. He initially made a first down but ran backward of his own accord and then was hit and fumbled. The ball bounced behind him where Gilmore made a scoop with a lot of green in front of him. But the officials blew the call dead and deemed Kelce down by contact.

Normally, this year, the officials will let a play run itself out and then determine if a turnover occurred. But not here. Belichick was forced to use his second challenge. The call was reversed and the Patriots recovered but the scoop and probable score by Gilmore was negated.

Brady drove the Patriots down to the KC 15 where on 1st down, he hit N’Keal Harry on a short pass to the left. Harry broke to the outside, and launched himself over the pylon for what appeared to be a touchdown. One official ruled him in, the other said he stepped out at the three. If they went with a touchdown it would have been automatically reviewed. The replays were clear, Harry was well within bounds, but because Boger’s crew had blown those two earlier calls, the Patriots had no challenges left.

Worse, the players had begun to leave the field, believing a touchdown had been scored. With the play clock running out, Brady hurried them to the line and White was stuffed for a 2-yard loss on a play that had no chance of success. On 2nd down, Brady’s pass was dropped by Meyers in the end zone. A 3rd down sack forced a field goal making it 23-16.

But Boger’s crew wasn’t done, on the Patriots final drive, Brady had a 3rd and 6 and went deep to Phillip Dorsett who was clearly interfered with but no flag was forthcoming. Brady did convert the 4th and 6, scrambling in slow motion for 17. They stalled and on 4th and 3 from the KC 5, Brady’s pass to Edelman was broken up. Ball game.

Obviously, had the Harry score upheld, the 4h down would have been a field goal attempt to tie and send the game into another overtime. And while Boger’s crew deserve all of the bile that will come their way, (they remain the worst crew in the NFL), the reason the Patriots were in that position in the first place was their own lack of execution earlier and the Chiefs big second quarter.

They didn’t quit and the defense showed why they are among the best in the league again. It is a frustrating loss but they’re still 10-3 and remain the #2 seed.

We’re on to Cincinnati (that sounds vaguely familiar)