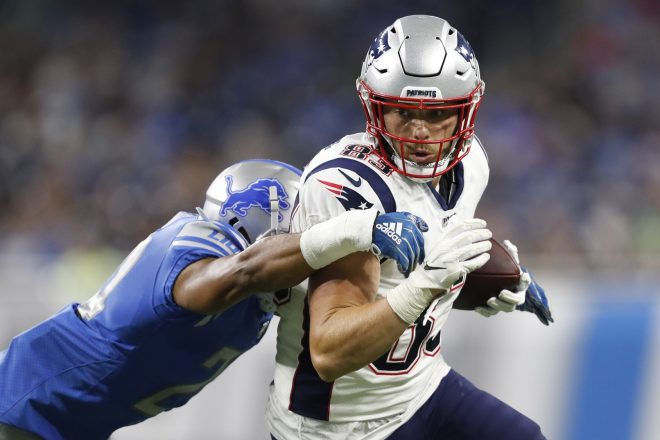 The tight end position for the Patriots has been an area of concern since the spring. Rob Gronkowski retired, Dwayne Allen is now a member of the Dolphins and Jacob Hollister was traded. The team brought back Ben Watson, but he’s 38 and suspended for the first four games of the season.

They brought in Matt LaCosse from the Broncos and after a good spring, there was the hope that he could take his game to the next level with Tom Brady and the Patriots. Stephen Anderson, a move tight end was returning, as well as Ryan Izzo who missed his rookie season with an injury.

They added UDFA Andrew Beck from Texas and the team gave him a guaranteed sum of $110,000, which isn’t a lot but it was the most of their undrafted free agents.  Then the team signed veteran Lance Kendricks who played for the Packers last year.

While this was far from optimal, with the players they have, it was considered possibly enough that they could get it figured out and that the team will be able to maybe surpass the production they had from the position in 2018. With Gronk et al. in 2018, Patriots tight ends caught 54 passes for 761 yards and three touchdowns. But the team took a hit where they could least afford it in the past few days.

Kendricks left practice early with an injury while the team was still in Foxboro on July 28 and he didn’t practice or play during the time in Detroit. During the game, LaCosse was off to a good start and had two catches for 37 yards. But he suffered a lower leg injury in the game and went down in obvious pain. Members of the training staff had to help him off the field. An already thin group just got thinner.

No one knows the severity of the injuries to Kendricks or LaCosse. The upcoming practice this morning [Monday] will be telling. If neither is able to go and both miss considerable more time, then the team is between a rock and a hard place.

Watson is still a quality tight end, but he’s going to miss the first four weeks of the season and they’ll still need another tight end to step up. They can’t expect Watson at 38 to carry the entire position.

Anderson has flashed in small doses, and he only played a half dozen snaps [hurt also?] on Thursday, while Izzo is more of a blocking tight end than a true receiving threat. Beck has been getting more reps as a fullback or H-back than a true tight end, which may be his calling eventually.

So, what do the Patriots do now? If Kendricks and LaCosse do indeed miss more time, then the team may have to make a deal to bring in another tight end. James Develin, the team’s fullback, can also help out there as he practices with the tight ends frequently during camp sessions. He’s an outstanding lead blocker but isn’t a great receiving threat.

Today won’t tell the tale but an absence of the two injured players puts this position into further question marks as time rolls along. In a perfect world, both Kendricks and LaCosse return to practice this morning and everything falls into place.

But that perfect world doesn’t exist. Everyone in attendance [media and fans] will be watching today to see if those two players come up the steps and onto the practice fields. If not, the phone lines should be busy in Foxboro.

By: Steve Balestrieri
“Why don’t you guys go to the officials with your pool reporter and ask them about the play and let them explain it to you,…
7 hours ago

By: Bob George
Kirk Cousins threw for nearly 300 yards and was sacked only once. Justin Jefferson had to be the main shutdown target, and he lit up…
2 days ago