Gameday! The Patriots are on the road to face the Houston Texans later tonight on Sunday Night Football. And after three bad weather games in the past four, the Patriots will be playing indoors.

But first, we hope everyone had a wonderful and happy Thanksgiving holiday surrounded by family, food, and football. I was exceptionally blessed to be surrounded by all three. Thanksgiving morning I was lucky enough to cover and shoot a highschool game between long-time rivals Grafton and Millbury since I also work for each of the respective town’s newspapers.

These small-town, early morning Turkey day games are so distinctly New England in their flavor, it would make a great Norman Rockwell painting and sets the tone for the entire day. And what a game this year, two outstanding coaching staffs, great kids and a great game that went right down the wire. It was more entertaining (for me anyway) than much of what I watched later on television. That’s what I was thankful for. 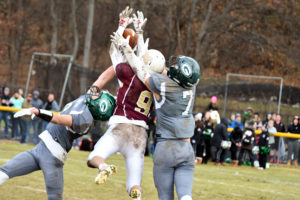 M*A*S*H* Unit – The Patriots have over a third of their roster either out or questionable for tonight’s game against the Texans as the flu bug has ravaged the unit (Thanks Dallas) this week. The latest to go down was LB Kyle Van Noy who missed practice on Friday.  With one player ruled out (As of Friday night) Ryan Izzo, and 17 questionable, the list of inactive players will be scrutinized closely later tonight.

Kai Forbath – The veteran kicker is the 4th player to play the position in 2019 after Nick Folk suffered appendicitis and was released. Forbath has played for Washington, New Orleans, Minnesota, and Jacksonville.

Forbath’s signing means that the team has had more kickers (4) in the past eight weeks than they did in the previous 23 years. Other than the final eight games of 2010 when Stephen Gostkowski was injured, the Patriots have had either him or Adam Vinatieri at the helm.

Julian Edelman – The Patriots veteran WR has one of the most entertaining social media accounts out there. From his “cop” videos with Danny Amendola to others, it is always a must-see for Patriots fans. He didn’t disappoint on Thanksgiving having photoshopped the famous Norman Rockwell Thanksgiving Day painting and adding Robert Kraft, Bill Belichick, Sony Michel, Chase Winovich, Stephon Gilmore, Jason McCourty, Devin McCourty and of course his BFF Tom Brady. 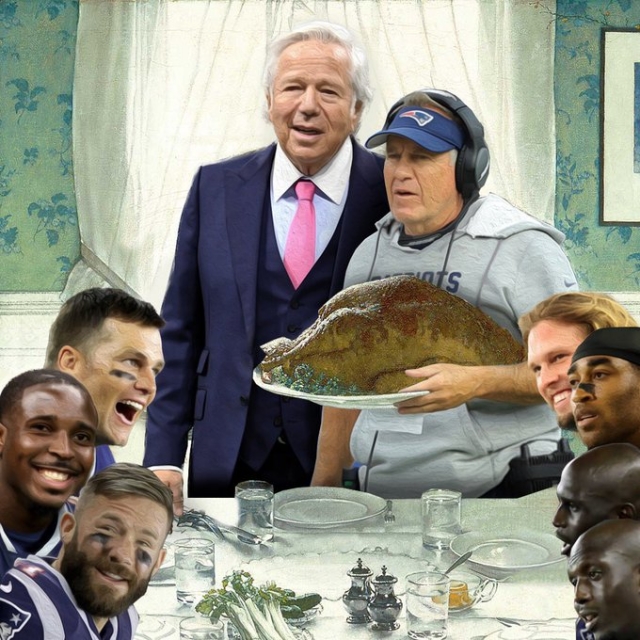 Edelman 2: Edelman on Friday was in a Star Wars state of mind. NESN’s Zach Cox wrote that the WR was asked about his leadership style when in the meeting room with the young Patriots WRs. Edelman didn’t disappoint.

“I don’t think Yoda would go out there and tell his secrets of how he trains Jedis,” Edelman said. “So I’m not saying anything, buddy.”

It is That Time Again, Post-Thanksgiving Run:

Bill Belichick has always said that you don’t really know what you have in a football team until after Thanksgiving. Well… here we are. The Thanksgiving tryptophan coma is in the books and tonight will the first game in the month of December.

This is when the Patriots have traditionally have turned things up a notch and began to tighten things up for the stretch run and hopefully a long post-season run. Not that the team has a lot of things to tighten up on, being 10-1 entering Week 13.

But with the Ravens right behind them in the AFC (with the tie-breaker) and the Bills playing really good football at 9-3, they can ill-afford any slip-ups. Especially with Chiefs awaiting after the Texans game and the Bills on tap soon after that.

Tom Brady spoke about these things on Friday in his press conference and echoed that this is the time of year, for the team to take it up a notch.

“Yeah, this is an important time of year for every team and the teams that are fortunate enough to really still be in it,” Brady said.

“This is the time where you’ve pretty much seen what you can do and what the other teams can do and the roles guys play and so forth. So, we’ve got to – we’re playing some really good teams, and this is the one that matters the most is the one that we’ve got ahead of us. It’s a great football team, well-coached, very good on offense, very good on defense. They don’t beat themselves, they’re explosive. It’s just a great football team. So, a big challenge for us, Sunday Night Football. I’m sure they’re going to give us everything they’ve got, and hopefully, we can go match it.”

The Patriots are always practicing situational football and while many teams pay it lip service, not many will practice it with the intensity that Bill Belichick’s teams do…and it highlights the sometimes razor-thin difference between winning and losing.

Sunday’s game against the Cowboys was a prime example. There is a reason the Patriots practice outside in all weather conditions and Belichick frequently will douse the footballs with water, making it as difficult as possible in practice. Because they won’t blink if it happens in the game.

With the very tough weather conditions on Sunday and in a tight defensive game, it became a field position, situational football game. The Patriots were very prepared for it, Dallas was not. Belichick knew that they couldn’t turn over the ball and may need a turnover or two to win. They got it and never put the ball on the ground. Dallas had one turnover and nearly had several others.

Just a look at how each team handled the kicking game was quite telling. The Patriots kicked off short and while the wind played tricks on the returners, the Cowboys nearly turned the ball over a few times. The Patriots left their deep man back and had a returner at about the 15-yard line in case of the same issue. 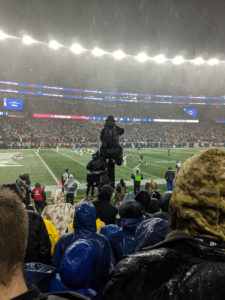 The conditions on the field were such that practicing in conditions like this played in NE’s favor. Photo: SBalestrieri

Wonder why they always have so many guys practicing returning punts in practice? Late in the 3rd quarter, Rex Burkhead made a fair catch of the ball in the wind giving the Patriots excellent field position. No big deal right? Wrong. Burkhead, who had never fielded a punt in the NFL, had been practicing for this type of situation since training camp. New England got a field goal on the ensuing possession.

And of course, Matthew Slater with a huge block of a Cowboys punt deep in their own end gave the struggling offense the ball at the 11-yard line. The result of which was a Patriots touchdown, the only one of the game. Chess-checkers.

With the Patriots in Houston tonight, we’ve compiled our list of players to watch in the game. This list will also be matched against who is available as 17 players are questionable for this one.

Tom Brady – The Patriots QB hears the same drivel every year at this time from the hot take artists that he’s done, he’s in decline, yada, yada, wash, rinse and repeat. With the OL getting back together, and his #2 and #3 receivers possibly being back and his 1st round draft receiver getting back into the lineup, things are trending up.

And this is a great week for turning things up a notch (as we stated above). With everyone talking about Deshaun Watson this week, Brady would love to stick a fork in all that with a big game against the Texans. The feeling here is that he will.

Stephon Gilmore – The Patriots corner is making people rethink that Revis Island stuff we were all saying a few years ago. He’s been the best corner in the league for a couple of years now and is facing another daunting task of covering DeAndre Hopkins.

This is nothing new for the soft-spoken Gilmore, which is even rarer among NFL corners as they tend to be the bombastic, diva types. But his matchups with Hopkins, among the very best WRs in the league will be areas to watch all night.  Where are all those people who lamented paying Gilmore all that money over Malcolm Butler in 2017?

Sony Michel – The Pats 2nd-year RB had a very solid game against the Cowboys last week. And it wasn’t just in the number of yards it was the way he ran. He hit the holes quickly and made a number of good cuts as well as got good yards after contact.

Running against a middling Texans run defense, look for the Patriots to get Michel involved early this week to set up play action. Do you think Sony liked running behind his old college teammate at crunch time?

Lawrence Guy – The Patriots’ very good and very underrated big man on the defensive line has had a couple of very good games back-to-back against the Eagles and Cowboys.

With the RPO (run, pass option) of the Texans and a very good Houston rushing offense, Guy will need a big game again. Look for him and fellow teammate Danny Shelton to try to penetrate inside to disrupt the timing and flow of those RPOs.

Isaiah Wynn – Wynn made a nice return to the field this past week and had a solid game against the Cowboys. He looks like a player far beyond making just his fourth start in the NFL. The Patriots have put a lot of faith in him as their LT of the future and down the stretch and in the playoffs he can justify all of that faith.

After what we saw in crunch time against Dallas, look for the Patriots to utilize him and Joe Thuney in the running game with TE Ben Watson more and more as they’ll attempt to run to the left in this one tonight.

NFL Schedule Week 13, Who Are Your Winners:

No AFC Notes this week, we’ll bring those back next week.

“Yeah, they’ve been great. Joe’s got a lot of leadership, obviously ,and more experience, but Jake’s mature beyond his years. He’s handled everything as well or better than I could imagine anybody at his age and his experience level handling it, from the punts to the field goals to the holding to the kickoffs. He’s done a great job for us. They’ve both played great.”– Bill Belichick being asked about the way Jake Bailey and Joe Cardona have handled the situation working with different kickers

By: Robert Alvarez
The best sights and sounds shared over social media from Friday and Saturday's Patriots training camp sessions.
3 days ago

By: Robert Alvarez
The best social media soundbites and photos from the second Patriots training camp practice session.
6 days ago