3 years ago at 8:49 am ET
Follow @bob_george
Posted Under: Patriots News 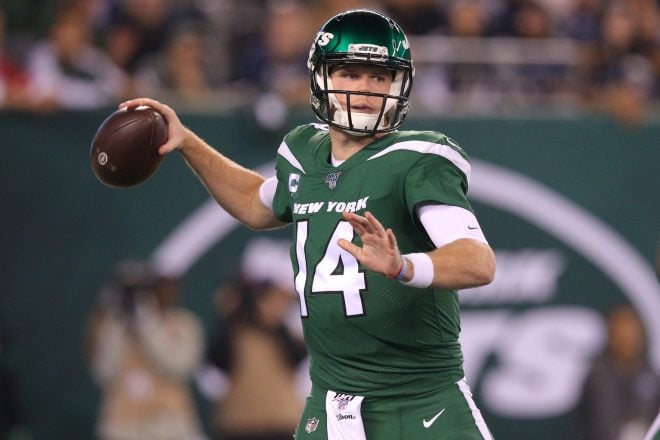 The second-year quarterback of the Jets was miked for Monday night’s game against the Patriots at MetLife Stadium, and in the second quarter, he dropped this timeless sound byte:

What Darnold actually saw was a defending Super Bowl champion coming at him with a better defense than they had last year.  The Patriot defense, which is slowly leaving legendary status and is now approaching biblical status, induced four interceptions, caused a strip sack, induced a safety, and finished the night by pitching a shutout.  The Patriots went to 7-0 on the season with a 33-0 beatdown of their hated rivals, and the Patriots have turned this “rivalry” into something that is totally embarrassing for Jet Nation.

The Patriots, undermanned on offense and having to resort to veteran retreads and graybeards for help, were in total command all game long and were literally never challenged.  Despite the offense getting stuck in neutral in the second half, it didn’t matter.  The Patriots did nothing offensively in the third quarter yet outscored the Jets 2-0.  Darnold spent the entire night going to the University of Brady, majoring in how to correctly manage a football game.

Tom Brady, minus Josh Gordon, Rex Burkhead and Matt LaCosse, didn’t break a sweat all game long and still managed good numbers.  He finished 31 of 45 passing for 249 yards, one touchdown and one interception.  His rating was 80.7, a higher rating perhaps foiled by his lack of production in the second half.  He managed to complete passes to eight different receivers; old reliables Julian Edelman and James White had seven catches each, but Jakobi Meyers had a nice evening with five catches on five targets for 47 yards.

And making his triumphant return to the team he began his NFL career with, Ben Watson, all of 38 years old, had three catches for 18 yards.  Every little bit helped.

The running game was of little help.  Despite scoring three short rushing touchdowns, Sony Michel had 42 yards rushing but only averaged 2.2 yards per carry, which was also the team average per carry.  The team’s best rusher was Edelman, who gained 20 yards on three jet sweeps.

The defense continues to carry the day for the Patriots.  Sooner or later, the Patriots will come across an elite offense, and things may turn out differently.  But against the Jets, the Patriots turned this matchup into a men versus boys deal.

Darnold was sacked once, picked off four times, and was 11 of 22 for 86 total yards and a passer rating of 3.7.  Not a typo, folks.  3.7.  Helped by a bunch of questionable penalties, Demaryius “The Patriots were a waste of time!” Thomas had a team high 42 receiving yards on three catches.  Despite J.C. Jackson being flagged for some questionable penalties especially on balls that were uncatchable and ticky tack hand checking, Thomas was no factor against the Waste of Time Patriots.

Bill Belichick dialed up lots of blitz packages against Darnold, and he was flustered all game long.  He was pressured into a lot of throws off the back foot, two of which ended up as end zone interceptions, one by Jackson and one by Terrence Brooks.  Darnold clearly needs to learn how to manage a game better and to take better care of the football.  Four sacks are less injurious than four interceptions, and when Darnold starts to learn that, his play will no doubt improve.

And to top things off for the defense, they also induced a safety.  In the third quarter, facing second down and 7 at his own 6-yard line, a shotgun snap went over Darnold’s head and into the end zone.  Darnold batted the ball out of the end zone for a safety.  Actually, a penalty was called on Darnold for an illegal batting of the ball, but the enforcement brought about a safety anyway.  The Patriot hobgoblins celebrated as the lead grew to 26-0, and you began to wonder if Darnold was thinking “Who ya gonna call?”

The strip sack took place on the second play of the second quarter.  On first down at the Patriot 49, Darnold dropped back and was chased by John Simon.  Simon stripped the ball from Darnold and Kyle Van Noy fell on the ball at the Jet 38.  Thinking he wasn’t touched, he got up and ran it in for a touchdown, but after replay, someone’s ankle touched Van Noy’s ankle while he was on the ground, which negated the touchdown.  The Patriots got a touchdown anyway thanks to a one-yard run by Michel.

Other than the defense, props should also go out to lead blockers in the Red Area.  On the first touchdown in the first quarter, Michel scored on a three-yard end run thanks to blocks by Watson and Marshall Newhouse.  Michel’s second quarter touchdown was thanks to a crushing block by James Ferentz, son of Iowa head coach and Belichick “slappie” Kirk Ferentz.  Michel’s third touchdown in the fourth quarter was made courtesy of a lead block by Elandon Roberts, who is vying to become the next Mike Vrabel or the next Richard Seymour (probably Seymour since Vrabel lined up as another tight end and caught touchdowns versus blocking).

The 33-0 win represents the largest shutout win against the Jets in history.  This was a worse beatdown versus the home game a few weeks back when Darnold was out with mononucleosis.  The Jets were totally embarrassed and outclassed.  The Patriots continue their near flawless play, which despite mostly coming against losing teams is still impressive at the professional level.

The Patriots will get still another young up and coming quarterback next week, as the much improved Cleveland Browns come to Gillette Stadium next week.  Baker Mayfield will try and match wits with the Belichick defense, as will Nick Chubb and Odell Beckham, Jr.  The Browns are 2-4, but they are vastly different and more potent than the team which went winless a few years back.  Mayfield will be a lot like Darnold in terms of experience, but he represents a different skill set.  Still, Belichick will be ready for him when he comes here next week.

Will Mayfield be as spooked as Darnold?  Perhaps not, but when you see all the little kids begging for candy next Thursday, think of Darnold and see if any kid has the presence of mind to dress up like him.

READ NEXT:
6 Thoughts Following the Patriots Win Over the Jets
Posted Under: Patriots News