3 years ago at 7:13 am ET
Follow @SteveB7SFG
Posted Under: 2019 Patriots Regular season 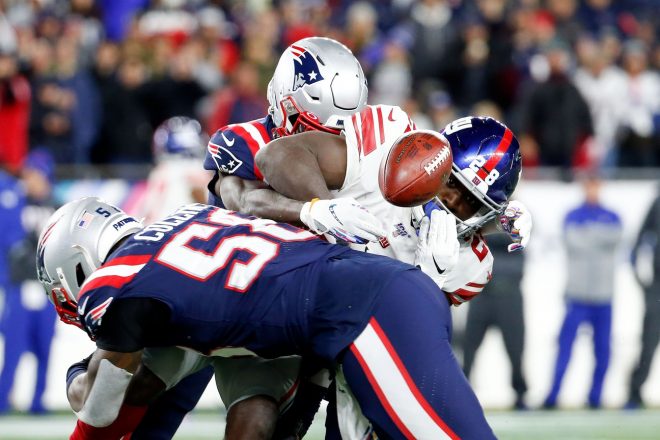 The Patriots are 6-0 and defeated the New York Giants 35-14 but this one went unlike most had envisioned on Thursday night at Gillette Stadium. Most had this one as a blowout which the final score indicated but in reality, it was anything but.

With solid play and timely stops by their defense, the Giants were very much alive in this game with about nine minutes to play, with the score just 21-14. Then the Patriots defense, which was outstanding again, turned the game into the Pats’ favor for good. Jamie Collins jarred the ball loose from running back Jonathan Hilliman, where Kyle Van Noy scooped the ball up and rolled for a touchdown. Game over, thanks for coming, drive safely down Route 1.

New England could breathe a sigh of relief as this one was effectively over. Tom Brady added a final touchdown on a one-yard quarterback sneak to finish off the scoring, his second rushing touchdown of the game to put a bow on it, making the score 35-14.

It was the Giants who entered this game beat up missing three of their top offensive players [Saquon Barkley, Sterling Shepard, Evan Engram], but it was the Patriots who limped out of this one. New England entered the game missing two of its own offensive performers, wide receiver Phillip Dorsett and running back Rex Burkhead. But they then suffered a slew of injuries during the game.

Josh Gordon left after awkwardly twisting his ankle/knee and didn’t return. Fullback Jakob Johnson also left with an injury, as well as tight end Matt LaCosse who left early in this one. These losses would affect the way the offense was able to line up the rest of the game. With only one tight end and no fullback, the Patriots ran only 11 personnel grouping [3 WRs, 1TE, 1 RB] for nearly the entire second half.

On defense, Pat Chung, Dont’a Hightower, and J.C. Jackson left with injuries, although Jackson was able to return later. So, the mini-bye week with 10 days off before playing on Monday Night Football against the Jets, couldn’t come at a better time.

Other observations from tonight’s game include:

The Patriots defense continues to play stellar team defense with great coverage in the secondary while generating turnovers. On a night where they generated just a single sack, the defense forced four turnovers with the aforementioned fumble and score by Van Noy and three interceptions by Duron Harmon, John Simon, and Stephon Gilmore. Gilmore almost had a fourth but dropped it when he jumped a route to Golden Tate on a third-down near midfield.

The coverage was sticky all night long against a game but depleted Giants WR core. The defense did give up its first passing touchdown of the year, a 64-yard scoring pass from Daniel Jones to Tate, although Jonathan Jones had tight coverage and actually got his hand on the ball. But credit Tate with an outstanding play, he was able to keep his concentration and still able to haul it in for the score.

But the defense limited the Giants to just 213 total yards [52 rushing, 161 passing] while being outstanding once again on third down, holding the G-men to just 2-10.

You Think Bringing Back Brandon Bolden Was Worth It?

At the time Brandon Bolden was re-signed and brought back after a year with Miami, there were many who panned the signing,[including a hot-take dolt on the air] saying that Bill Belichick signs too many players with Special Teams talent only. As the Southwest Airlines commercial says, “Want to Get Away?” No, the return of Bolden has done nothing but pay dividends.

Back in minicamp, I spoke with RB coach Ivan Fears prior to practice and asked him about bringing back the popular teammate inside the Patriots locker room. And what Fears said has rung true this season.  “No matter what we ask him to do, Brandon will do it, and do it well,” Fears said.

In the last three games, Bolden has scored three touchdowns and figured prominently in a fourth. Bolden had a rushing touchdown against Buffalo, caught a 29-yard score from Brady against the Redskins and ran one in against the Giants in short-yardage tonight. But he caused the blocked punt in the first half which resulted in a Chase Winovich touchdown.

Bolden rushed in on a punt block and drove Nate Stupar backward where Riley Dixon’s punt went off Stupar’s head. The ball bounced backward where Thor scooped and scored. This was all because of Bolden’s work while out on the field.

Daniel Jones Can Sling It:

What? you say, are you kidding? And a look at Jones’ numbers would seem to play that out. How so when he completed only 15 of 31 for 161 yards which was only good for 5.2 yards per pass and three interceptions?

Granted Jones’ numbers weren’t good, nor his passer rating of 35.2, but his depleted receiving core was blanketed all night long and he frequently had nowhere to go with the football.

But several of his throws, including the touchdown to Tate and another pass to Tate on a third-down slant were delivered in very tight windows, quickly and accurately. If you look past the boxscore and rewatch the tape, Jones did as well as could be expected given the circumstances.

The Giants, as we pointed out in our key matchups piece, would move Tate into the slot to take him away from Stephon Gilmore and have him battle Jonathan Jones. It was a good hard battle all night long.

Jones had plenty of bad moments and plays to be sure, but he looks to be a good QB who was just placed in an unwinnable situation

Offense Needs Help But They Weren’t Quite As Bad As Believed:

The Patriots struggled on offense for much of the night and had to claw and scratch for everything they got. The play of the offensive line continues to be suspect at times and they seem to be scuffling along in search of an identity.

But at the end of the day, the generated 424 yards of offense and held the ball for nearly 40 minutes, which really tired out the Giants’ defense.

Tom Brady struggled in the first half but ended up 31-41 for 334 yards. He scored on two short QB sneaks but threw a weird interception in the first half. While attempting a deep post to Julian Edelman, the ball was well behind Edelman where Janoris Jenkins picked it off. Was it miscommunication or the wind?  Edelman was outstanding with nine catches for 113 yards including a beautiful diving catch which set up Brady’s last TD dive.

TE Ryan Izzo has really struggled with blocks to the edge which is supposed to be his strong suit. LaCosse can’t catch a break, or stay healthy, he’s hurt again. With the injuries to Dorsett and Gordon, an already hurting WR core was stretched mighty thin. Kudos to UDFA rookie wide receivers Meyers and Olszewski who both contributed in the passing game. Meyers had four catches for 54 yards including a nice 23-yarder where he high-pointed the ball and had the awareness to raise it over the defender to keep it from being knocked away. Olszewski chipped in with two catches for 34 yards.

But within the next 10 days, they have some decisions to make. Even if Gordon and Dorsett are back, they should probably look at adding some help. One thing to keep in mind, 1st-round draft pick N’Keal Harry can begin practicing on Wednesday and return in another two weeks from then.

And with LaCosse hurt again, it may be time to explore bringing in another tight end. The offense is getting by for now but with the meat of their schedule upcoming with Baltimore, Philadelphia, Dallas, Cleveland, Houston. and Kansas CIty yet to come, they need to get the offense figured out.