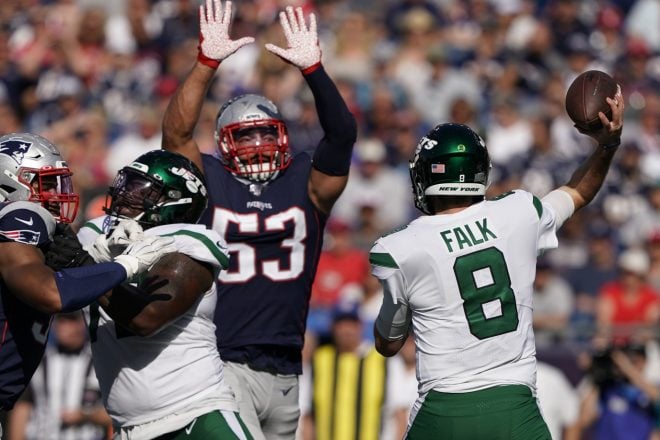 Are you a graphic designer and love the New England Patriots?

Well, Kyle Van Noy wants your help, and he has an enticing reward for a job well done.

On Twitter Tuesday, Van Noy fired off a few recruitment tweets seeking a shirt/sweatshirt design for “the boogeymen”, a nickname for the Patriots linebacker corps coined by Dont’a Hightower.

Okay whoever makes the best Boogeymen group design for the linebacker core which includes everybody…. We will be put it on a tshirt or sweatshirt (since it’s gettin cold) and I will buy tickets to a game of your choice as well as have us sign all of them.

If you think you have what it takes to win over what currently stands as the NFL’s best linebackers, get to work and send your shirt designs over to Van Noy before the weekend.

We will announce the winner Sometime over the weekend no later then Sunday! Internet do yo thang!!!

Through five games the defense has 24 sacks and is on pace for 77, a mark that would break the NFL record of 72, set by the 1984 Chicago Bears.

The Patriots also have 11 interceptions to lead the NFL.

“We compete. It’s a great group not just in the linebacker room but the defense, we all want to compete. … We’re trying to get more picks, more forced fumbles. It’s a great defense”

The “boogeymen” meanwhile, will look to add to the record setting defensive numbers on Thursday night against a banged up Giants team, and perhaps celebrate another victory in new shirts.