3 years ago at 7:00 am ET
Follow @SteveB7SFG
Posted Under: 2019 Patriots Regular season 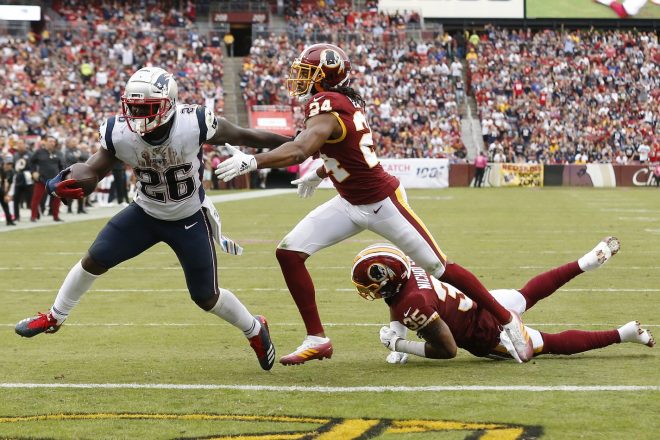 Patriots Sitting Pretty at 5-0, Despite winning against ugly competition

The Patriots are 5-0 and one of [at this time] two undefeated teams left in the league. The Redskins are in a complete tailspin and are now 0-5 and have fired Head coach Jay Gruden. So, while the Patriots aren’t a perfect team at 5-0, their opponents at this point of the season are 5-15, with just the Bills being a good team thus far of their opponents.

The Patriots started out slowly and actually trailed for the first time in the 2019 season. By halftime they led by only five at 12-7. After halftime was a different game and they outscored Washington 21-0, completely dominating the game and improving to 3-0 on the road. It should be noted that the team has already won as many games on the road as they won in all of 2018.

Tom Brady had an overall very solid day, throwing for 348 yards and completing 28 of 42 passes while tossing touchdowns to three different receivers. He also had another very bad red zone decision that resulted in another awful-looking interception. Early in the game, the Redskins pass rush disrupted things, but Brady missed a golden opportunity and overthrew Josh Gordon who had cleanly beaten the coverage.

But despite losing Phillip Dorsett early to a hamstring issue, Brady spread the ball around to nine different receivers. His throw to Brandon Bolden for a 29-yard touchdown was a beautiful touch pass and the one just before that to James White was aces as well. Brady may not an easy touchdown as the one he threw Izzo. The Redskins cleared out to each side and nobody was within the same area code as Izzo. Easy six points.

Nice comeback week for Brady after a rough outing in Buffalo. Completing 67 percent of your passes, throwing three touchdowns and 348 yards with a QB Rating of 106? Nothing wrong with that.

The Patriots got the running game started [read Sony Michel] by going back to the power running game between the tackles in the second half. Once they got the running game going, everything fell into place and the Patriots blew them out. Michel had 91 yards on 18 carries, including a 14-yard touchdown and chipped in with three catches in the passing game for 32 yards. That is something we have been clamoring for and if they can keep it going, then this offense will be much less predictable.

James White turned in a classic JW28 performance with 72 yards combined rushing and receiving, helping keep the sticks moving. He does everything so smoothly, it sometimes looks too easy. Veteran RB Brandon Bolden scored on a beauty of a 29-yard touchdown pass from Brady. It was a carbon-copy of the same route and throw he and Brady connected against the Skins four years ago in Foxboro.

Jakob Johnson was feeling more comfortable out there on Sunday. He laid some tremendous blocks in the running game and while he’s not James Develin, he’s looking like he’s going to be just fine. And he caught a pass to boot.

Julian Edelman had a fantastic day, catching eight passes for 110 yards and a six yard touchdown catch on nine targets. The only misfire was on a drop where Edelman was wide open and had the ball hit him right in the hands. He had a lot of green in front of him there. But his toe-tapping catch along the sideline was superb. He was giving the Redskins secondary fits yesterday.

Josh Gordon had five catches for 59 yards but the one that got away could have given him a huge game, he blew by his defender and had an easy touchdown and Brady overthrew him. Jakobi Meyers had one catch for six yards

Matt LaCosse and Ryan Izzo not only got involved in the passing game, but they had their best day blocking as well. LaCosse had one catch for 22 while Izzo had two for 39 including a 10-yard touchdown. LaCosse had a tremendous block on Michel’s 14-yard touchdown run.

Izzo’s touchdown reception was the first by a Patriots tight end since Rob Gronkowski found the end zone last year. His touchdown was a bizarre play where he went down the seam and the Redskins secondary parted like the Red Sea where there was no one even remotely near him. Izzo will take it, his first NFL touchdown. Hopefully, this is a sign of good things to come, especially with the news that Ben Watson will not be activated and was released.

The offensive line had a mixed day. In the first half, they gave up three sacks and could only generate about 10 yards of offense in the ground game. But they got things figured out and started clearing out holes in the running game for Michel to run through. Brady despite the pressure threw for 348 yards and three scores.

Dante Scarnecchia’s group dominated the second half. Now they need to keep it going against the Giants.

The defensive line once again was very, very good. They gave up a 65-yard run early but there were missed tackles that they don’t normally commit in the secondary. The Redskins generated some garbage time yards late in the game, but between those two moments, the Redskins were stuffed. Adrian Peterson had 18 yards on seven carries.

The defensive line showed multiple fronts, gave Colt McCoy different looks and constantly changed up personnel. They helped put a ton of pressure on McCoy, generating six sacks and eight quarterback hits. Danny Shelton and Lawrence Guy are both having excellent starts to the 2019 season.

The Patriots linebackers were once again outstanding. Sunday was Dont’a Hightower’s return to action and he was the player of the game. Hightower was everywhere and the Redskins had no answer for him. Hightower had 8 tackles, 4.5 for a loss, 1.5 sacks, 1 pass defensed, and two quarterback hits.

Jamie Collins had a sack where it looked like he was shot out of a cannon. Chase Winnovich added his fourth sack of the season while Ja’Whaun Bentley read a screen to Chris Thompson and dropped him with a thundering hit.

The secondary had a rather ho-hum day while not allowing a passing touchdown while intercepting an opponent for the 11th time this season [Jason McCourty]. Terry McLaurin was held in check, the backs didn’t produce much in the screen game and the Redskins finished the game with 75 net passing yards and averaged 2.3 yards per pass. It doesn’t matter who the opponent is, that is domination.

Stephen Gostkowski err, Mike Nugent had another miss on the first extra point of the day in what seems like Groundhog Day. However, Nugent recovered sufficiently and was fine after that, hitting two chip shot field goals and the three extra points.

Jake Bailey had another terrific game and punted six times, averaging 47.7yards per punt. Gunner Olszewski returned three punts for 49 yards. And nearly came away with a broken on down the middle of the field.

The Patriots coaching staff made the adjustments they needed to make offensively, where Josh McDaniels schemed the running game open. He also picked on the Washington linebackers in the passing game, something we pointed to in our Razor’s Edge pregame matchups. Other than that one play on defense, the Redskins were unable to move the ball at all.

We’re on to the Giants and Thursday Night Football, with the puke color rush uniforms. The “Knockin’ on Seven’s Door” 2019 tour continues with the Patriots at 5-0.