7 years ago at 9:24 pm ET
Follow @IanLogue
Posted Under: Uncategorized 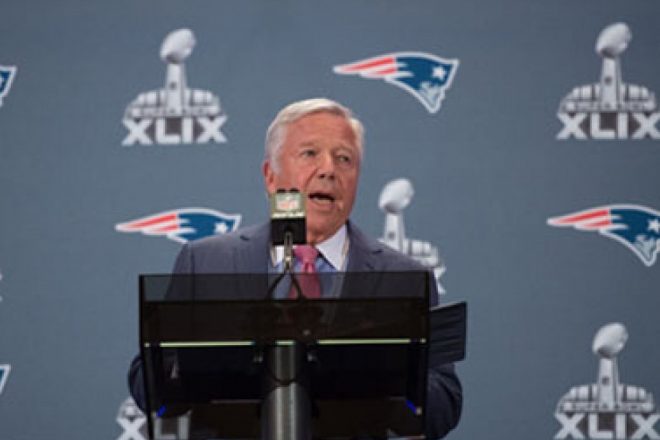 Robert Kraft has had to watch Tom Brady deal with being wrongly accused for well over a year by the NFL, and Friday’s decision to end his legal battle has lead to some strong statements by the owner against the league.

Kraft released a statement Friday afternoon blasting the league for what he believes was far from a “fair and impartial process”, and given the lack of evidence the fact that the league seemingly did all they could to go after him is something that seems to still have him fuming.

Now that it’s over, he didn’t mince his words and let his thoughts fly with some strong words towards the NFL and as a result, Roger Goodell.

“While I was disappointed with the 2nd U.S. Circuit Court of Appeals’ decision not to rehear Tom Brady’s case, I am most frustrated that Tom was denied his right to a fair and impartial process,” Kraft wrote in the statement. “The League’s investigation into a football pressure matter was flawed and biased from the start, and has been discredited nearly unanimously by accredited academics and scientists.

“The penalty imposed by the NFL was unprecedented, unjust and unreasonable, especially given that no empirical or direct evidence of any kind showed Tom did anything to violate League rules prior to, during or after the 2015 AFC Championship Game. What Tom has had to endure throughout this 18-month ordeal has been, in my opinion, as far removed from due process as you could ever expect in this country.

“From day one, I have believed in Tom and given him my unwavering support in his pursuit to rightfully clear his name of any wrongdoing. That support extends throughout our organization and has only grown more steadfast as the preponderance of scientific evidence has exonerated Tom. Unfortunately, this stopped being about air pressure a long time ago.

“This entire process has indelibly taken a toll on our organization, our fans and most importantly, Tom Brady. His reluctant decision to stop pursuing further action and to put this situation behind him is what he feels is best for the team in preparation for this season and is fully supported by me and our entire organization.

“To our devoted fans, your unwavering support for Tom and our organization have only reinforced our longstanding belief that we have the greatest fans in all of sports. We will continue to unequivocally support Tom and know our fans will rally around him and the rest of the team like never before. Our full focus now is on making the upcoming season a memorable one for all of our fans.”