3 years ago at 8:17 am ET
Follow @SteveB7SFG
Posted Under: 2019 Patriots Regular season 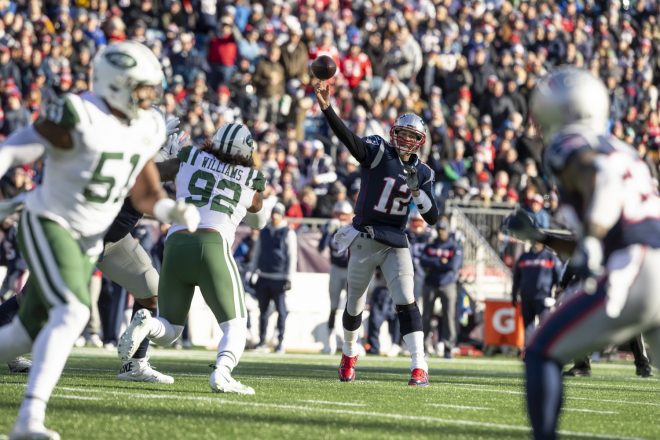 The New York Jets had very different designs on the start of the 2019 season. After firing everyone and beginning a fresh start, they hired head coach Adam Gase, who they hoped would jump-start Year 2 for QB Sam Darnold, were big spenders in free agency signing Le’Veon Bell and C.J. Mosley to big-money contracts.

But a combination of injuries and illness have taken their toll on the roster and the Jets find themselves in an 0-2 hole. Now they’re coming to Foxboro to take on their hated rival New England Patriots who have dominated the matchups in recent years.

With the offense banged up and already on their third starting QB of the season, they’ll have to lean on their running game and their defense this week if they want to pull an upset. Here’s our first look at the 2019 J-E-T-S, Jets, Jets, Jets.

Luke Falk is the Starting QB for Now:

Luke Falk went from practice squad QB and running the scout team to being the Jets starting QB in a matter of hours.

The football gods dealt the Jets a couple of haymakers early this season. Starting QB Sam Darnold was feeling sick before the opener against the Bills and later it was learned that he contracted mononucleosis and will be out for at least a month. With the weight loss and fatigue that is associated with the illness, there is a dangerous chance of his spleen becoming enlarged, which would put him at serious risk of injury if he were to play before being completely healed.

The team had signed free agent Trevor Siemian this offseason. He spent 2018 with the Vikings after three years of being on the QB carousel with John Elway and the Broncos. Siemian is a smart, strong-armed passer but has had accuracy issues. He got the starting nod [13-11 record as a starting QB] against the Browns. But on a hit by Miles Garrett as he was releasing the ball caused his foot to get caught up in the turf under him. The result was a gruesome-looking injury. He tore the ligaments in his ankle and is lost for the year.

Luke Falk, c’mon down… It is a tough position for Falk to step into. The Jets will be signing another QB this week to back up Falk but Gase said he will be the starter until Darnold returns from his illness. Falk also signed with the Jets this spring after spending much of his rookie season on IR with the Dolphins. He entered in the second quarter after Siemian went down and completed 20 of 25 passes for 198 yards. He had a 99.7 passer rating.

Injuries Everywhere For the Jets:

It isn’t just being down two quarterbacks where the Jets are hurting. They are banged up everywhere. WR Quincy Enunwa was lost for the season on IR after suffering a serious neck injury. Le’Veon Bell had an MRI on his shoulder after getting banged up on Week 1 against the Bills. He did play and play well against the Browns but will be operating on a short week.

Newly acquired wide receiver Demaryius Thomas was already dealing with a hamstring issue with the Patriots before his trade to Gang Green, reinjured it on Monday night and it would be surprising to see him play on Sunday. That leaves Robby Anderson, Jamison Crowder at WR with Bell out of the backfield, Ryan Griffin at tight end and a lot of question marks.

The defense is banged up too. ILB C.J. Mosley who the Jets signed to a huge free-agent contract was playing outstanding in the opener, scoring a TD on a pick-six as the Jets raced out to a 16-0 lead. But once he left with a groin injury, the Bills scored 17 unanswered points and took the game 17-16. He missed the Browns game and is considered day-to-day for New England this week.

Quinnen Williams, the #3 pick overall in this spring’s NFL Draft injured his ankle against the Bills and also missed the Browns game. Jordan Jenkins injured his calf against the Browns and isn’t expected to be ready for the Patriots game this weekend.

The Jets laid out some big money for running back Le’Veon Bell this spring and thus far he’s done everything they’ve asked and then some, totaling up 229 all-purpose yards on offense for the Jets after sitting out the 2018 season in a contract squabble with the Pittsburgh Steelers.

But the look on his face on Monday Night was unmistakable as he was visibly frustrated as the Jets fell to 0-2 with a 23-3 loss to the Browns. Now the Jets travel to New England, whose defense has been playing outstanding for the first two games. Bell, who was not used to losing in Pittsburgh was quick to point out that he was looking forward.

Bell took to Twitter and put any questions to rest…for now. “It’s easy to get down, but I don’t let that negativity affect me. I’m BLESSED! I’m healthy, secure, & back doing what I love! Yea, I’m frustrated things haven’t went our way. But I look at life and think, how can I complain? I’m grateful to be in this position & to play this game.”

Expect the Jets to lean heavily on Bell in both the running and passing games on Sunday in Foxboro.

Jamal Adams Benched, Trying to Force His Way Out of NJ?

During Monday night’s 23-3 loss to the Browns, Jets safety Jamal Adams was benched, albeit shortly [five snaps], but it was his reaction that set tongues wagging. After the game, Adams, changed his Twitter bio that previously read “Former LSU All-American – Defensive Back for the New York Jets.” to “Let the lord fight your battles. He hasn’t lost one yet!”

This immediately got the social media world gaga over his comments, believing that he, like Antonio Brown and Minkah Fitzpatrick was trying to force his way off the Jets and move on to greener pastures. His comments after the fact did little to dispel those rumors.

He called the questions to his bio change just “outside noise” and insisted he was “just focused on this team.” But his explanation of his benching, although brief, was alarming in its tone. “Yeah, I was benched. They benched me. I tried to anticipate a play … and I anticipated wrong,” Adams said in an interview with WFAN Sports Radio on Tuesday. “It happens.”

The Jets also benched high-priced cornerback Trumaine Johnson, who they gave a five-year $72 million dollar contract last year, but his benching was for the entire game. Whether they are just sending a message or they’re done with Johnson will be an area to watch this Sunday.

Gregg Williams Aggressive Defense Will Be Front and Center on Sunday:

There are fewer controversial figures than the Jets defensive coordinator, Gregg Williams. Williams is no shrinking violet the way he coaches his defense and the manner in which they play. But sometimes, both he and they cross the line.

Prior to MNF, Browns WR Odell Beckham Jr. called out Williams and accused Williams of coaching “dirty football.” He cited a 2017 preseason game where Beckham Jr. said, Cleveland players told him after the game that Williams wanted the WR targeted for dirty or late hits.

Williams was suspended for the 2012 season following a tape that was made while he was the defensive coordinator of the Saints where he openly encouraged Saints players to take out opposing players for a monetary bonus.“Kill the head and the body will die”, he was recorded as saying. The tape made its way to the league and both he and head coach Sean Payton were suspended.

Regardless of those charges, the Jets and Williams should be even more aggressive on Sunday. His team’s offense is struggling and the defense will have to keep them close enough to try to force an upset. The Patriots offensive line is minus three starters including both starting tackles. Williams’ defenses are always aggressive and use the blitz liberally. Come Sunday, look for him to be even more aggressive.