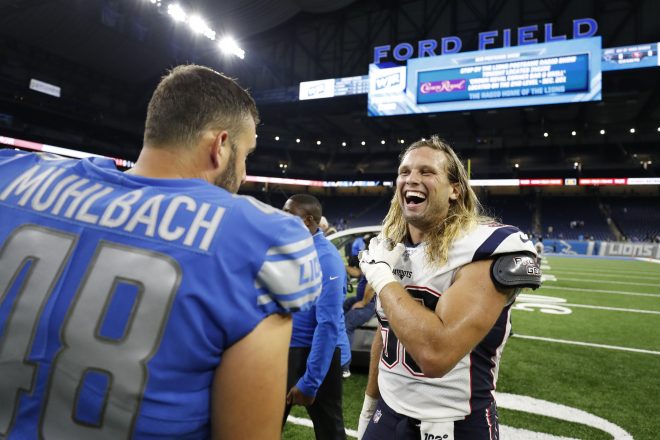 Patriots rookie defensive end Chase Winovich has had a terrific camp, with plenty of nice moments as he continues working his way into the line-up. Here’s a quick rundown of what’s been written about him after the team finished up their final public session this week.

“Brady took Chase Winovich behind the practice fields after practice, had him get his helmet and tossed him a blocking pad. Brady threw passes and Winovich would hit the QB after he released the pass. One Michigan Man helping another.” – Greg Bedard, Boston Sports Journal – 7/28/19

“Rookie defensive end Chase Winovich blew up two consecutive plays in the two-minute period. He would have recorded a sack on the first rep (had he been allowed to hit quarterback Tom Savage). On the next, he drove his blocker backward into Savage, causing the towering quarterback to hit the turf.” – Kevin Duffy, Boston Herald – 8/05/19

“The Lions’ offensive line starters got the best of the Patriots’ pass rushers in 1-on-1s. But local favorite Chase Winovich had a great, quick inside move, Derek Rivers and Deatrich Wise (twice) were big winners for the Patriots.” – Greg Bedard, Boston Sports Journal – 8/06/19

“Patriots rookie Chase Winovich was terrific. He turned in the best 1-on-1 rep of the day, blowing by a Lions offensive tackle. He also would have recorded a sack in 11-on-11s. This was the second consecutive strong day of practice for Winovich.” – Kevin Duffy, Boston Herald – 8/06/19

“On the defensive side, Chase Winovich and Shilique Calhoun had some splash plays as they brought a little more juice to the proceedings.” – Greg Bedard, Boston Sports Journal – 8/06/19

“Had a dominating win in 1-on-1s and continued that into team play as he starts to get more comfortable with the scheme.” – Greg Bedard, Boston Sports Journal – 8/06/19

“Chase Winovich put on a show in front of family and friends in Michigan jerseys. He won all three of his one-on-one reps, using his quickness on one rep, bending around a tackle on another and powering through a holding penalty on a third. (He also steamrolled receiver Brandon Powell in a kickoff period. Almost a 60-pound difference between the two, and Winovich made Powell pay for getting in his way.)” – Phil Perry, NBC Sports Boston – 8/06/19

“Chase Winovich, James Develin, and Deatrich Wise were among those staying late on the back field working on drills with the tackling dummies.” – Jim McBride, Boston Globe – 8/12/19

“On the rep preceding Jackson’s interception, rookie pass rusher Chase Winovich blasted around the edge for what would have been a sack of Tannehill (of course, there’s no contact with quarterbacks in practice).” – Kevin Duffy, Boston Herald – 8/14/19

“Winovich also intercepted Tannehill in a different 11-on-11 period. The ball was tipped at the line of scrimmage by Deatrich Wise, and Winovich — also rushing the passer — reacted and dove for the interception.” – Kevin Duffy, Boston Herald – 8/14/19

“A third-round pick out of Michigan, Winovich isn’t getting a ton of first-team work, but his impact is felt in every practice (he also enjoyed a strong debut in the preseason game at Detroit). There’s little doubt that Winovich will play a good amount as a rookie. He’ll push John Simon, Derek Rivers, and Shilique Calhoun for time.” – Kevin Duffy, Boston Herald– 8/14/19

“Deatrich Wise tipped a pass at the line that was intercepted by Chase Winovich.” – Jeff Howe, The Athletic – 8/14/19

“Winovich got some time over the center. Could just be trying him out in a sub package look.” – Jeff Howe, The Athletic– 8/14/19

“He also had an interception but he’s been more impressive in team drills where he seems to always be in the backfield or setting a strong edge. He’s standing up all the tight ends he goes against. Would like to see some reps against tackles.” – Greg Bedard, Boston Sports Journal – 8/14/19

“Chase Winovich over Tyler Marz. Just dipped around him and put on the jets.” – Greg Bedard, Boston Sports Journal– 8/15/19

“DE Derek Rivers: Went 0 for 2 in his one-on-one reps and really didn’t distinguish himself in these practices. You hardly noticed he was there, unlike Chase Winovich who again had another good joint practice.” – Greg Bedard, Boston Sports Journal – 8/15/19

“Chase Winovich did a lot more moving around in this practice and encroached once trying to anticipate the snap.” – Greg Bedard, Boston Sports Journal – 8/15/19

“The Pats used Chase Winovich over the nose in one sub-defense package. Winovich, who looks like the team’s best rookie at the moment, is pushing for time with the starters. He would have seen more reps if not for an offside penalty during 11s.” – Kevin Duffy, Boston Herald – 8/15/19