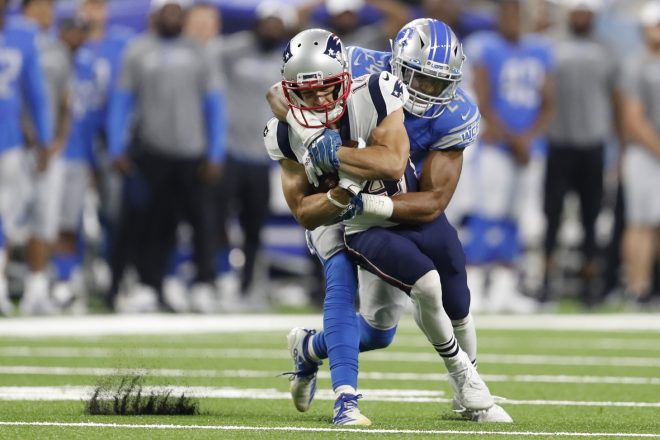 At the conclusion of the first joint practice with the Titans on Tuesday, the state of the Patriots receiver corps was more notable on who wasn’t in attendance rather than who was. Julian Edelman, Demaryius Thomas, Cameron Meredith, Josh Gordon [still suspended] tight end Matt LaCosse and N’Keal Harry were not there for the beginning of practice, although Harry was in uniform, he didn’t take part in any activities and quickly moved off to work with members of the training staff.

It isn’t known if the dings that Dorsett and Harris took were heat-related or more serious. Dorsett was reported to have returned and rode a stationary bike at the end of the practice session. This is in addition to reports that running back Damien Harris is dealing with a wrist injury, which has limited his pass=catching ability.

But rather than looking at this as a red flag [as it would be during the regular season], this is a time of opportunity, a chance to earn more reps with the starting unit and carve out a role for themselves for the players on the field.

Meyers has been a very pleasant surprise as to how fast he’s caught on to the Patriots system as well as his versatility and production in the passing game. If there is an area where he could improve it would be in special teams. The coaches have been getting him some reps in the punt return game, which to date haven’t been all smooth.

Berrios has thrived during joint sessions and the preseason game with the Lions and is carrying that momentum into this week in Tennessee. Berrios looked very good in the return game last week in Detroit and that alone may win him a spot among the final 53-man roster. Away from the smothering Jonathan Jones in team practices, Berrios has found room to move and made some nice plays in the passing game.

Dontrelle Inman may be the biggest benefactor from the recent spate of injuries to the wide receivers. After a very forgettable spring, Inman found himself deep in the bowels of the depth chart at the beginning of training camp. He helped himself with some good work against the Detroit third teamers last week.

Now he’ll get more reps with Brady and the first team unit today. If that means more playing time on Saturday night, then it is a chance to move up in the pecking order. If he can find the comfort level and chemistry with Brady that he showed late last season with Andrew Luck, he could force himself into a much better situation. Maurice Harris had a tremendous start to camp. But he had a couple of big drops in Detroit, [granted one was a clear defensive pass interference] and with him now possibly on the shelf, this allows Inman a chance to push him a bit.

LaCosse’s ankle injury last week opened the door for the team to bring in the third-year tight end Eric Sauber that they picked up from the Falcons for a conditional 7th round draft pick. Sauber has the size, 6’5, 255 pounds and the athleticism to play special teams and to attack the seams of the defense. But the knock on him is his hands, “manos de piedra” which have precluded him from having any impact in the league.

Sauber should get more and more work in the passing game as the team tries to lighten the load on 38-year old Ben Watson. Ryan Izzo is known more as a blocker. Rookie Andrew Beck is being used more as a fullback/H-back and Stephen Anderson has seemingly become an afterthought in the passing game.

But like anything else, opportunities arise and players have to take advantage of them.