3 years ago at 9:42 am ET
Follow @IanLogue
Posted Under: Patriots News 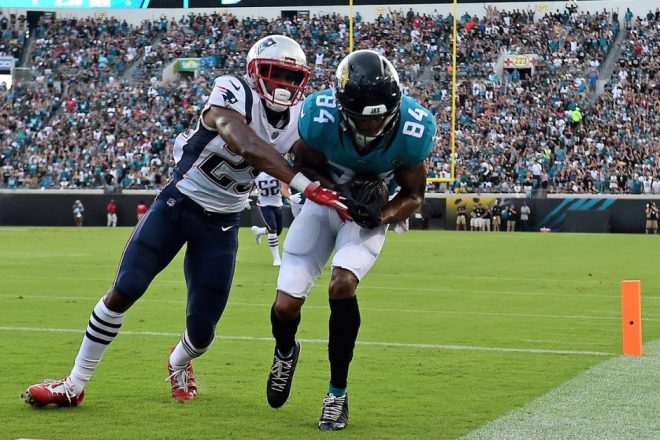 It’s been a long summer for Duke Dawson, who seems like he faces an uphill battle with not much time left this preseason to earn a role with the team.

Here’s a rundown of what’s been written about him so far during training camp:

“I wouldn’t call this a terrible day or anything but with so much talent in the secondary, I thought it was noteworthy I didn’t see Dawson break up any passes and he gave up several completions. Will need to ramp up to hang with these guys.” – Greg Bedard, Boston Sports Journal – 7/25/19

“Duke Dawson and Devin McCourty both had interceptions in the 3-on-3 period. ” – Mark Daniels, Providence Journal – 7/26/19

“Devin McCourty, Duke Dawson and Obi Melifonwu all came up with interceptions during some 3-on-3 work early in practice.” – Paul Perillo, Patriots.com – 7/26/19

“Rookie free-agent WR Ryan Davis made a nice grab on a deep ball from Brady to the end zone. He tracked the ball well over his shoulder and beat CB Duke Dawson to the spot.” – Matt Dolloff, 98.5 The Sports Hub – 7/31/19

“Second-year cornerback Duke Dawson gave up a deep touchdown pass to undrafted rookie Ryan Davis in 1-on-1s. Dawson went for the interception but misplayed the ball as it arrives. Dawson finished strong, however, recording a pass-breakup in the final period.” – Kevin Duffy, Boston Herald – 7/31/19

“A pair of high draft picks were in the rotation on second-team defense. Defensive end Derek Rivers, a 2017 third-round pick, and cornerback Duke Dawson, a 2018 second-round pick, seem like they have yet prove themselves worth a roster spot.” – Henry McKenna, USA TODAY – 8/01/19

“Despite a big day for Meyers, CB Duke Dawson did get a hand in on a pass to him over the middle for a breakup. Dawson should be on everyone’s projected rosters, despite his slow build and the team’s depth at corner.” – Matt Dolloff, 98.5 The Sports Hub – 8/01/19

“Duke Dawson would’ve picked up a couple of penalties of his own, getting too handsy with Braxton Berrios and Ryan Davis. Dawson had a strong rep on Gunner Olszewski later in the drill, and though the rookie caught the pass, Dawson seemed to think there was a little offensive pass interference on the play. ” – Phil Perry, NBC Sports Boston – 8/01/19

“The one-on-one stuff would pretty easily earn him flags in a game situation. He hasn’t yet had a string of consistently positive plays. ” – Phil Perry, NBC Sports Boston – 8/01/19

“Like Jones, Dawson also seemed to have a tough day at the office as he allowed several receptions. Seems like he’s losing a bit of confidence.” – Greg Bedard, Boston Sports Journal – 8/06/19

“The best completion of the day in these drills was from Brady to Braxton Berrios. Brady lofted a deep ball near the corner of the end zone for Berrios, who adjusted to the ball as he tracked it through the air and bobbled it for a second before securing it as he slid to the turf. Berrios got half a step on Duke Dawson on the play.” – Matt Dolloff, 98.5 The Sports Hub – 8/12/19

“The former second-round pick allowed four catches on the day. Barring a stunning second half of his summer, it’s hard to see Dawson climbing back into the roster picture.” – Andrew Callahan, MassLive – 8/12/19

READ NEXT:
As More Patriots WRs Go Down, It is Opportunity Time for the Remainder
Posted Under: Patriots News