3 years ago at 6:20 am ET
Follow @SteveB7SFG
Posted Under: Patriots Commentary 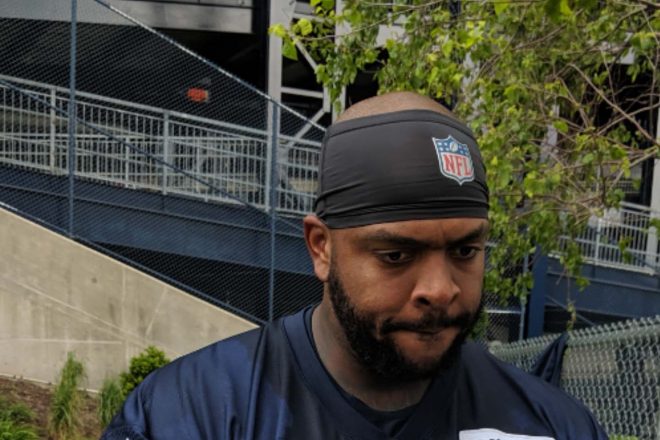 The Patriots picked up one of the more under the radar free agents this spring and one who will play a key if an unheralded role in the defense. Mike Pennel came available after the Jets declined his option and the Patriots quickly swooped in and signed him.

Pennel, 28, who is listed at 6’4, 332 pounds fits what the Patriots like to do, especially on early downs with their defense. They want a big, immovable player to clog the middle, fill up the two gaps on either side of the nose and allow the linebackers to clean up.

That fits Pennel to a tee. While he was surprised that the Jets decided to decline his option, making him a free agent, he knew exactly where he wanted to go. He mentioned with the new coaching regime there, that they would be making changes. After the final minicamp practice, Pennel spoke with the media about his time thus far with the team.

“I knew I fit their scheme,” Pennel said. “It was my first visit and although I took others, I knew this is where I wanted to be.”

He said he was aware of how the Patriots and coach Bill Belichick use nose tackles in the defense and Pennel was rated as one of the best run-stuffers in the league last season. Much like a former Patriot legend, Vince Wilfork.

When asked about Vince, he said, “Vince was one of my idols as a nose,” Pennel said. “Coming out of Miami, I followed him closely. He was very productive early in his career and then settled into his role with Bill here.”

He added, “and then, later on, went to Houston and did the same thing. That played a big part in kind of being here. Just because knowing how Coach Bill (Belichick), what he does with nose tackles and things like that. Obviously, it’s fundamentals and technique, but he’s doing something special with those guys here to have them perform at that level.”

Pennel mentioned that his defensive line coach with the Jets has a connection with Pats DL coach Bret Bielema. “Bret was actually friends with, Robert Nunn,” he said.

“Joe Kim (Pats pass rush/martial arts coach) has some experience with Nunn, so it’s kind of the same technique and coaching-wise and nuances and little things like that they’re coaching but with, it’s just a lot more precise. Everything from the footwork, whether it’s three inches outside or six inches, everything is very detailed-oriented. We practice it and try to do it better on game day.”

He’s always striving to learn something every day, something he said he learned from B.J Raji in Green Bay earlier in his career.

Having been in the league for a while, Pennel said that he knew some of the players here and the transition to the locker room and the Pats DL room has been an easy one. “I definitely didn’t get the first day of school feeling here,” he joked, adding. “I’ve known Lawrence Guy and he hosted Pennel on a recruiting trip to Arizona State.

“I’ve kept in contact with him and have seen his success here in New England. I’m just learning the things that they like and don’t like and we’re just working things out.

Asked about how the interaction and feeling is in the DL room with some new faces (including himself), he said it is all positive.

“It’s excellent. It’s just a range of guys, and I try to pick something up from everybody,” Pennel said. “(Michael) Bennett, speaks for itself. LG, I feel as if he had a Pro Bowl season last year, so any run tips I can get off of him. Danny (Shelton… great pass rusher from the inside. (David) Parry’s been a vet. Ufomba (Kamalu), KD (Keionta Davis), they’ve got Super Bowls. It’s just everyone in there you can learn something from. I’ve never won a Super Bowl. Unfortunately, I missed the playoffs for the last two seasons of my career, so those guys know a little something about playing in January, so I just try to pick up everything.”

Playing alongside Guy is a plus for him he added. “Knowing that he’s a top run defender in the league and last year I excelled a little bit in the run, so hopefully, we can do something good.”

So getting to play in January was a selling point for New England, he was asked?

“They didn’t have to sell that point,” he said laughing. “This is where I want to be.”