4 years ago at 11:40 pm ET
Follow @IanLogue
Posted Under: Uncategorized 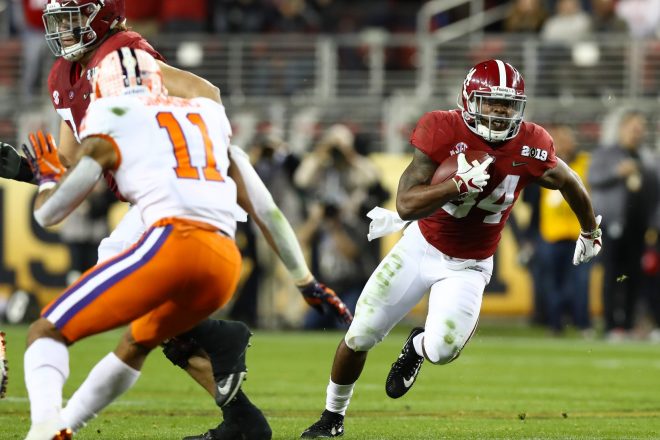 After going defense on two straight picks, Bill Belichick elected to grab a running back after taking Alabama’s Damien Harris in Round 3 Friday night.

Harris was taken 87th overall and gives the Patriots some additional youth behind Sony Michel, who had a terrific first season for New England. Michel was crucial to the Patriots’ championship run, finishing the year, including the playoffs, with 1267 yards rushing and 12 touchdowns.

Harris had a solid career, finishing 8th in school history with 3070 career rushing yards. The former Alabama standout finished his senior season with 876-yards along with nine touchdowns. He averaged 6.45 yards per carry for his career, ranking him third in SEC history behind Bo Jackson and Derrius Guice.

He also performed well at the combine, recording a 4.57 40-yard dash as well as putting up a vertical jump of 37 inches, putting him in the top 5 (4th) of this year’s class of running backs.

One of the things that also stands out about Harris is the fact he has excellent vision and hits the holes hard, having done a great job picking up tough yards in Nick Saban’s offense. New England relied heavily on Michel down the stretch and Harris should hopefully help take some of the weight of that workload.

His addition also sets up an interesting situation heading into training camp as the Patriots now have Harris, Michel, James White, Rex Burkhead and Brandon Bolden in what is suddenly a fairly crowded backfield.

READ NEXT:
WATCH: Dont’a Hightower Shows Off His Rings During Pick Announcement
Posted Under: Uncategorized