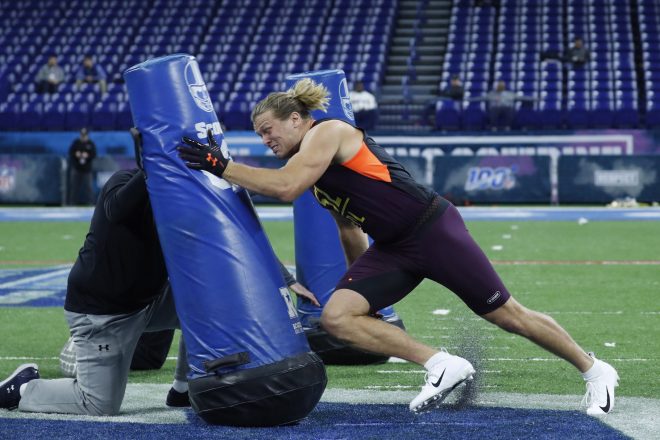 After trading down previously, the Patriots finally made their second selection of night two and once again, Bill Belichick made a pick on the defensive side of the football.

The Patriots selected Michican standout Chase Winovich with the 77th overall selection, adding the Wolverine defensive end to their defense.

Winovich is an interesting player. He’s got decent size at 6’3″, 256-pounds and also has good speed to go along with it. He ran a 4.59 40-yard dash along with a 4.11 shuttle time, with the latter stat generally being one that Belichick tends to appreciate and Winovich was certainly one of the more explosive players at his position. He finished his final season with 59 tackles and 5 sacks, despite spending part of the year battling injuries.

The rookie is also a former tight end, having switched positions during his time in Michigan before coming into his own at his new position. Off the field, he was active in the community, including helping raise over $200k for the ChadTough Foundation, including a viral social media campaign where he was among teammates who died their hair orange.

According to their website, the ChadTough Foundation raises money for DIPG research and for outreach to families of children who have been diagnosed with DIPG.

He’s a tough player, battling through what at the time was an undisclosed injury he suffered during the season, but he participated in the Peach Bowl, the Senior Bowl, along with his showing in the NFL Draft Combine.

He reportedly got hurt during the Wolverine’s battle against Ohio State and the pain never went away. He learned after the fact that it required surgery.

“I came back after that week,” Winovich told the Detroit Free Press, “and got it checked out and got an MRI and they were like, ‘Yeah, you need surgery. What do you want to do? You can either wait and suffer through it or get it now.'”

ProFootballTalk.com later revealed he needed thumb surgery, which will hopefully see him ready to participate in OTAs.

After losing Trey Flowers during the offseason, the fact the Patriots made a move to potentially give them a player who can help replace some of Flowers’ production is good news, especially given the fact Winovich is also considered to be solid against the run. Clearly he’s a player who checks the right boxes and the fact that he’s got experience at tight end might be fun to watch, especially knowing that Belichick is no stranger to doing the unexpected, much like he did with former linebacker Mike Vrabel.

As a result, he appears to be another great addition as the Patriots continue adding some talent and youth to their defense.

How Was This Article?
Posted Under: 2019 Patriots Draft

By: Ian Logue
With New England sitting with little cap room, something had to give in order for them to get their final three draft picks signed.
13 mins ago