4 years ago at 7:50 am ET
Follow @SteveB7SFG
Posted Under: Super Bowl LIII 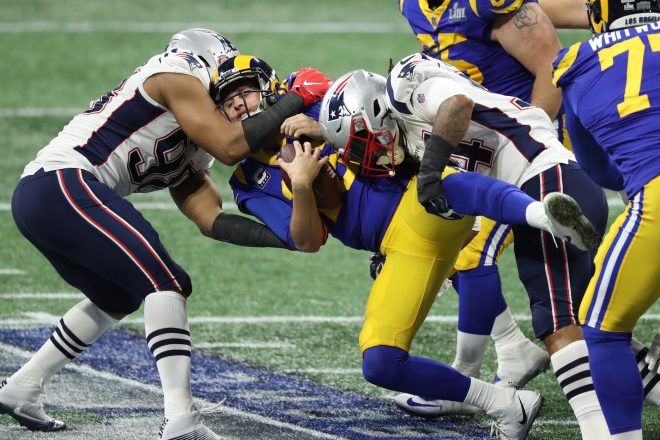 Nobody saw that kind of low-scoring game playing out, but Bill Belichick and Brian Flores put together a masterful game plan and totally shut down the Rams offense, which was the #2 scoring unit in the league, holding them to nearly 30 points below their weekly average.

Julian Edelman was the most uncoverable receiver on the field and very much deserved the MVP Award, although the Patriots offense moved the ball well all night long, they couldn’t finish drives. But they found a way to win late and that’s what champions do, And the duck boats are gearing up for a parade on Tuesday morning. Super Bowl win #6 is a testament to how teams win victories and not always the more talented.

Tom Brady didn’t have the eye-popping numbers 21-35 for 262 yards with 0 TDs and 1 INT in the game as the Rams did a very good job of mixing things up and changing coverages especially after the Patriots would cross mid-field.

While Brady didn’t get hit a lot, the Rams did have pressure and were all around him enough to influence many of his throws. So, while the Patriots could move the ball consistently, they weren’t able to finish drives. Until crunch time.

With the game tied at 3-3 with ten minutes to go, that’s when Brady engineered a perfect drive where he made it look easy. First, he lobbed a perfectly drop in the bucket to Rob Gronkowski for 18 yards to get the offense moving. Next, he hit Edelman right down the middle for 13 yards. This was followed by a 7-yard pass to Rex Burkhead on the right sideline. On 2nd and 3, from the Rams 31, he made his best pass of the night, a beautifully placed touch pass to Gronkowski who beat double coverage. Gronkowski hauled it in as he went to the ground for a 29-yard gain. Sony Michel easily powered it in from the 2-yard line on the next play….Boom. Welcome home Lombardi Trophy #6.

Sony Michel, you remember that “waste of a 1st round pick”? Well, he led all ball carriers with 94 yards on 18 carries including the only touchdown in the game. His biggest play was a 26-yard scamper that got the Patriots out of the deep hole in their own end.

Rex Burkhead chipped in with 7 carries for 43 yards and two catches for 15 more. On the same drive that started at the Patriots 4-yard line, Burkhead also got a 26-yard run where he burst thru the line and then cut back against the grain. Those two runs took the Patriots from deep in their own end into scoring range.

James White was a total non-factor in the game, carrying just two times for four yards and with just one catch for five more. The Rams did a tremendous job of taking him away.

Julian Edelman was absolutely uncoverable, and he rates an A+. The rest of the receivers? Not so much. Edelman roasted Nickell Roby-Coleman, frequently having 3 or more yards of separation. Roby-Coleman was doing a lot of talking early in the week, but didn’t walk the walk. The Rams then tried Aqib Talib on Edelman, but his quickness was too much for Talib off the line. Then Phillips trotted out Marcus Peters who was blown away off the line allowing a big catch down the seam for 25. Nobody could cover him on Sunday night. He finished with 10 catches for 141 yards on 12 targets.

Chris Hogan was targeted six times and had zero catches. Brady’s interception, on the first pass of the game, was well behind him. But he was unable to get any separation. Phillip Dorsett wasn’t targeted. Cordarrelle Patterson had two catches for 14 yards and added a pair of runs for seven.

Rob Gronkowski was excellent in the running game blocking for the backs. On the Patriots touchdown, they went to a two-tight end set and he and Dwayne Allen helped the line blow the Rams off the line of scrimmage for a too-easy touchdown that was the difference in the game.

But in the passing game, Gronkowski had six catches for 87 yards on seven targets. Like Brady, he saved his best for last. On the Patriots touchdown drive he had catches for 18 and 29 yards, the latter a really nice catch as he was going to the ground.

The Patriots offensive line put together another very impressive performance. While the Rams were able to stop the running game early on, they did a good job of protecting Brady, despite the pass rush of Aaron Donald and Ndamukong Suh getting some pressure. The only sack was more of a coverage sack than anything else. Brady had forever to throw but no one was open and he probably should have thrown it away.

But late in the game, with the Patriots backed up at their four-yard line with four minutes to go, the Rams knew they were going to run the football. And they did. On Sony Michel’s 26-yard run, David Andrews destroyed Suh, pushing him three yards to the left and dumped him on his backside.

The Patriots defensive line was absolutely terrific. The Rams potent running attack with Todd Gurley and C.J. Anderson never got untracked and had just 62 yards on 18 carries. The Rams motion tries to get linemen moving sideways, but the Patriots attacked and were getting very good penetration. Danny Shelton blew thru a gap and nailed Anderson for a loss.

Trey Flowers also burst thru and had a tackle for a loss. But the front also did a very good job at getting pressure on Jared Goff. Adrian Clayborn and Lawrence Guy had QB hits while Flowers had two.

The Patriots linebackers were outstanding. Both Dont’a Hightower and Kyle Van Noy were all over the field and they were a very disruptive force all night long. With the team running a 6-1 look, the outside backers were essentially lining up on the line of scrimmage. They did a tremendous job of setting the edge in the running game and took away those shallow crosses and slants the Rams like to run.

Elandon Roberts and John Simon each saw action and as a whole, the linebackers totally took away the Rams RBs in the passing game, which was supposed to be a mismatch. Rams RBs had three catches for 11 yards in the game.

The Patriots secondary played a different look mixing in man coverage with Quarters zone coverage and held the Rams to a net 198 yards passing which was far below their average of 281 per game. Stephon Gilmore was outstanding as he has been all season and chipped in with the interception that sealed the deal for the Patriots.

Slot corner Jonathan Jones played some safety in their Quarters looks which showed off his versatility. Jason McCourty had the play of the game where on a busted coverage, Brandin Cooks was wide open in the end zone. McCourty flew over from his side and knocked the ball away.

Pat Chung was having an excellent game, but early in the third quarter broke his arm. In stepped “the Closer” Duron Harmon, who played very well. Harmon blitzed and forced Goff into throwing a floater that was picked off by Gilmore.

Ryan Allen and Matthew Slater were fantastic in this game. Allen dropped three punts deep in the Rams zone where Slater was there to cover it up. They were able to force the Rams to go the length of the field.

Stephen Gostkowski missed his first field goal attempt but made his next two tries, including the one with a minute to go to put the game out of reach. The coverage units were solid and Patterson took the opening kickoff back 38 yards.

Bill Belichick and Brian Flores gave a master’s class on having a great game plan that the players were able to execute perfectly.  Of all the Patriots Super Bowl wins, this one could arguably be considered their best defensive effort, holding a team that averages almost 33 points a game to just a field goal.

Josh McDaniels tried mixing things up offensively where the team could move the ball but kept stalling. They did figure it out late in the game and the team put together two impressive drives to finish the game, and win another Super Bowl.

So, who’s ready for a parade?