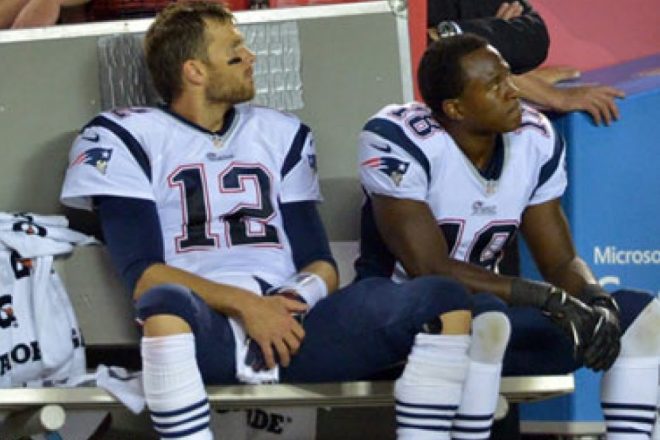 All week long, you might listen to Patriot fans and think the game this weekend is in Denver and not Kansas City.

Recently, the Patriots have learned how to win in the Mile High City.  But a check of the history books tells you that life for the Patriots is much worse some 565 miles to the east on I-70.

The Patriots will have to travel to Arrowhead Stadium on Sunday to take on the top seeded Kansas City Chiefs in the 2018 AFC Championship Game.  Chiefs fans are among the most loud, rabid and inspired fans in the NFL.  The fans make for one of the more hostile environments for a visiting team to have to withstand.

And the Patriots are among the most vulnerable opponents that come to this place.

Even though the Patriots won the tiebreaker with Kansas City by virtue of a 43-40 win at Gillette Stadium in Week 6, the Chiefs got the top seed thanks to a 12-4 record with the Patriots finishing only 11-5.  The Patriots took care of the other 12-4 team handily on Sunday, defeating the Los Angeles Chargers 41-28 on Sunday in the Divisional round.  The other 12-4 team is now on deck.

But the game will be at Arrowhead Stadium, and not Gillette Stadium.  Arrowhead has been around for quite some time, built back in 1972.  It is the fifth oldest stadium in the NFL.  It is known for its loud crowds, and the Patriots have some dubious history in that sense.  On the Patriots’ most recent visit to Arrowhead (September 29, 2014), the crowd helped establish a record which was verified by Guinness as the loudest crowd to ever watch a game at 142.2 decibels (thanks, Wikipedia).  It remains an ominous place to play for any visiting team.

The Patriots lately don’t play on the road in the playoffs all that much.  They have not won a road playoff game since 2006 at San Diego, they have not won a road AFC title game since 2004 at Pittsburgh.  They lost at Indianapolis in 2006 and lost at Denver in 2013 and 2015.  The Patriots were 3-5 on the road in the 2018 regular season.  Having the game at Kansas City helps the Chiefs greatly.

For some weird scheduling reasons prior to the current four-division alignment, the Patriots rarely played at Arrowhead.  But when they did, the Chiefs almost always won.

But in 2004, the Patriots broke through and finally won for the first time in 40 years in Kansas City.  On a Monday night game in November (on this writer’s birthday, no less), the Patriots went into Arrowhead and came away with a 27-19 win en route to a win in Super Bowl XXXIX at year’s end.  Though his name does not appear in the defensive stats, the game is most noteworthy for one of the starting cornerbacks being Earthwind Moreland, one of the several replacements for the injured Ty Law.  But the real heroes of the game for New England were Tom Brady (119.9 passer rating), Corey Dillon (98 yards rushing and two touchdowns), Deion Branch (105 receiving yards and a touchdown), and Rodney Harrison (interception of Trent Green).

They lost the next year, 26-16, which now brings us to the most recent visit there.  Oddly, it was nine years later, in 2014.  It was also the aforementioned highest decibel game ever.

This was Week 4 in 2014, and the Patriots suffered one of the more demoralizing and one-sided losses of the Brady-Belichick Era.  Jamaal Charles scored three touchdowns, and the Chiefs annihilated the Patriots, 41-14.  Most every football expert declared the Patriot dynasty over.  That season ended with the Patriots defeating the Seattle Seahawks, 28-24 in Super Bowl XLIX.  Reports of the demise of the Patriots were delightfully premature.  The Patriots have not been back to Arrowhead since.

That game is even more well known for the following week, and the most famous press conference in the life of Bill Belichick.  The phrase “We’re on to Cincinnati!” became a catch phrase, as the coach answered literally every question with that statement.  The writers relentlessly pressed the coach to explain what went wrong in the Monday night debacle.  Belichick stood his ground.  By the way, the Patriots clobbered the Bengals, 43-17.

Feeling discouraged?  Time to cheer you up a bit.

If there is any solace as to having to return to this house of horrors for the Patriots, it should be stated that the Chiefs have more playoff baggage than the Patriots do losses in this loud place.  Not many fans might realize that this is an historic game for the Chiefs in the context of heritage and franchise legacy.

First of all, the Chiefs are hosting the first AFC Championship Game in franchise history.  This also includes the ten years they were in the AFL.  The Chiefs went to Super Bowls I and IV, and in both cases had to win on the road to get to those games.  Their 1962 AFL Championship (as the Dallas Texans) was won at Houston.  That’s 58 years, and they are now finally hosting their first conference title game.

Since winning Super Bowl IV (23-7 over the Minnesota Vikings at New Orleans), the last such game before the merger, the Chiefs have only a smattering of playoff appearances, and very few playoff wins.  The Chiefs are 5-16 in all post-merger playoff games they have been in.  At Arrowhead, they are 3-7 all-time in playoff games.  The fact that the Chiefs won Saturday against Indianapolis represents a major moment in franchise history.

In the 49 years since Super Bowl IV, the Chiefs have made the playoffs only 17 times, including this year.  The first year, 1971, featured the historic double-overtime loss to Miami in the Divisional round, the first home playoff game in team history, and the last game at old Municipal Stadium.  They would not make the playoffs for another 15 years, losing a Wild Card game to the Jets.  Their next home playoff game would wait 20 years.

1990 began the best postseason run since the Chiefs entered the NFL.  They made the playoffs in seven of eight seasons.  1993 was the pinnacle, playing in their only other AFC Championship Game until this Sunday.  But they lost at Buffalo, 30-13, as the Bills were in the middle of their four straight Super Bowl seasons.  The last two of these seven playoff seasons were the most gut wrenching, as in 1995 and 1997 they were the top playoff seed.  But they went one and done at home both times, losing 10-7 to the Colts in 1995 and 14-10 to Denver in 1997.  Marty Schottenheimer, one of the worst postseason coaches in history, was the Chiefs’ head coach for all these eight seasons.

In 2003, the Chiefs were the two seed.  And again they went one and done at home.  Under head coach Dick Vermeil, they lost to Indianapolis 38-31.

Under Andy Reid, the Chiefs are 2-4 in the postseason, including a 27-20 loss to the Patriots at Foxborough in the Divisional round of 2015.    This game marks the only previous time these two teams have ever met in the postseason.

When the Chiefs were in the AFL, they were 5-2 in the postseason (1-0 as the Dallas Texans, the 1962 AFL Championship at Houston, which also went to double overtime like the 1971 Miami playoff game) under head coach Hank (“65 toss power trap!”) Stram, and 1-1 in Super Bowls.  Suffice it to say that the AFL Chiefs did a bit better than the NFL Chiefs in the postseason.

They lost the inaugural Super Bowl to Green Bay in 1967, 35-14.  Stram vowed that the Texans/Chiefs would win more games than any other AFL team in history, and he proved correct.  But they were put down by Packer head coach Vince Lombardi after the first Super Bowl, saying that the Chiefs didn’t measure up to the better teams in the NFL.  Lombardi was alive to see the Chiefs win Super Bowl IV, but if he were alive today, he’d take the postseason record of his Packers over the Chiefs any day.

Kansas City has opened as a three-point favorite over the Patriots.  Given the Patriots’ poor record in this city and stadium, and given the Chiefs’ checkered playoff history, something has to give.  It should be an entertaining game for all football fans, and an emotional roller coaster for the fans of both teams.  Either the Patriots will become the first team since Buffalo to go to three straight Super Bowls (again, when they went to their four straight), or the Chiefs will make it back to the Big Show for the first time in 49 years.

Nothing better than dueling curses.  It helped the Red Sox against the Angels in 1986.  Let’s hope the Patriots get similar help in 2019.