4 years ago at 6:35 am ET
Follow @SteveB7SFG
Posted Under: 2018 Patriots Regular Season 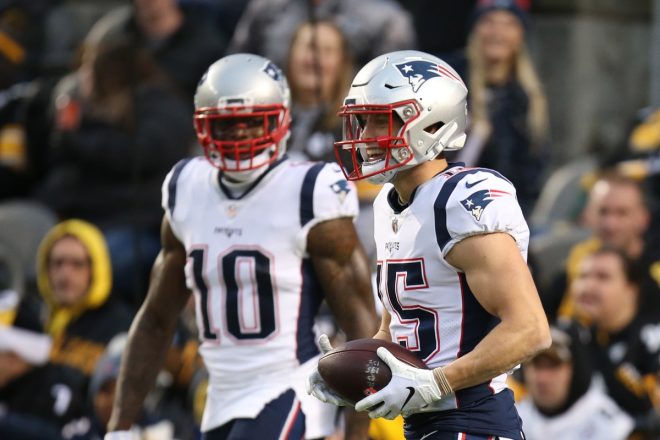 The Patriots road woes continued once again and the team finished the regular season on the road at a dreadful 3-5, losing their last two in particularly ugly fashion. This week’s loss against the Steelers was a continuation of that. Terrible mental mistakes, unforced errors, drops, penalties. Poor offensive line play when it counted and absolutely awful run defense.

We’ve been waiting for this team to get its act together and show who they are. It is becoming increasingly (and frustratingly) clear that this IS who they are in 2018. An inconsistent, and undisciplined group on the road. At home, this team can beat anyone. On the road, they can lose to anyone.

Tom Brady, in the grand scheme of things actually didn’t play very badly. He finished 25-36 for 279 yards with 1 TD and 1 INT. Drive killing drops by Julian Edelman and Josh Gordon on third down. Another by James White was behind him where it wasn’t a great throw by Brady but it is one White has made in the past. The interception was a pass he was trying to throw away but the pressure on him caused him to float it.

Brady wasn’t getting his usual support on Sunday that much is for sure. But to score 10 points on a Pittsburgh defense that he’s routinely shredded for 18 years? That isn’t going to get it done.

The Patriots running backs were ineffective running in the first half, they got it going for a short while early in the second half but being down caused them to ditch the running game and concentrate on the pass. Sony Michel (13 rushes, 59 yards, 4.5 avg), Rex Burkhead (4 rushes 25 yards, 6.3 avg.) and James White (2 carries, 12 yards) totaled up 96 yards on 19 carries, a 5.1-yard average, wasn’t bad. But they couldn’t sustain anything and of course, the holding and false start penalties were killers.

White wasn’t used much in the passing game with five catches for just 25 yards and it seemed like they went away from him late in the game. Burkhead had three catches for 18 yards and James Develin had two for 18.

Not a great day for the wide receivers, on the surface it appeared Julian Edelman had a really big day with seven catches for 90 yards but he had a key drop and then picked up two costly penalties. And he was at the head of the class. Chris Hogan had the huge 63-yard TD on their first possession. But then he had just one more catch for five yards the rest of the game.

Cordarrelle Patterson had three catches for 20 yards but it was the one yard that was taken away that hurt. On a third down, Patterson was stopped about four yards short of the sticks but on the second effort bulled his way to pick it up. But the play was reviewed and they moved his forward progress back to a 4th and 1 and the Patriots punted.

Josh Gordon had his worst game as a Patriot on Sunday. He had just one catch for 19 yards and he too had a very costly drop on 3rd down that was right in his hands and that killed a drive. It was the first time he’s struggled since signing with New England and came at a bad time. He was targeted just those two times and wasn’t even on the field for the final series inside the Steelers’ red zone.

Rob Gronkowski went from one of his better games of the season to invisible again in the passing game. The Steelers couldn’t cover Jared Cook a week ago and then Gronkowski could manage only one catch in each half. He ended up with 2 for 21 yards….nuff said.

The offensive line did reasonably well in spurts in the running game and they averaged 5.1 yards per rush. But they couldn’t sustain anything and in the passing game at crunch time, they folded under Pittsburgh’s pressure.

The offensive line was called for six penalties. Two of the holding calls wiped out red zone scoring opportunities. Another holding call wiped out a 25-yard run by Michel, which has happened far too often this year. Michel should have about 1100 yards rushing.

Like the defensive line, the Patriots OL gets pushed around on the road and yesterday it really cost them.

The defensive line got decent but not great pressure on Ben Roethlisberger and notched 5 QB hits with Trey Flowers and Lawrence Guy each with two apiece…that is the good news. The bad news is that they were totally gashed by the run again.

Jaylen Samuels had just 59 yards rushing for the year before Sunday’s game. He ripped the Patriots for 142 on Sunday afternoon on just 19 carries (7.5-yard average), part of the Steelers’ 158 yards on the ground. The defensive line was manhandled at the point of attack and it has been a common occurrence in every Patriots loss this season that the DL has been dominated in the trenches.

We gave them the benefit of the doubt against the Vikings as they went to very light packages to get after the QB and stop them from passing. But Miami and Pittsburgh were two of the worst running teams in the NFL and they have combined for 347 yards rushing the past two weeks. That is a recipe for losing.

The Patriots linebackers can share in the gaffes in run support with the defensive line. They too in run support frequently got washed out. On one play Dont’a Hightower flew up into the line and filled the wrong gap and Samuels shot into the unoccupied space for a big gain.

Kyle Van Noy got a sack when he perfectly anticipated the snap and blew thru the Steelers OL and got Roethlisberger in a bear hug and wouldn’t let go. But the linebackers actually did a really good job in coverage. We were worried about Samuels more in the passing game coming into this one and he wasn’t a big factor in the passing game. In some good news, the linebackers did a good job of securing the middle of the field.

The secondary had a rough start to the game. The Steelers began the game by spreading the Patriots defense out and they had great success with it and went down the field with ease on their first drive. On that TD pass, one of two by Roethlisberger, Vance McDonald beat Pat Chung easily for a 5-yard score. Antonio Brown later beat Jason McCourty badly for a 17-yard score. But the secondary did their job and well.

Despite gashing the Patriots in the running game, the Steelers insisted on trying to throw it down the field and Roethlisberger had only 235 yards on the day. He had two TDs and two INTs, both by Duron Harmon. Jonathan Jones was the victim of what we thought was a horrible 26-yard pass interference penalty.

Stephon Gilmore and rookie J.C. Jackson were both outstanding on the perimeter. They held Antonio Brown (4 catches, 49 yards on 7 targets) and JuJu Smith-Schuster (4 catches, 40 yards on 10 targets) in check. Harmon had the two interceptions and the Patriots defense at the end of the day held Pittsburgh to just 17 points.

The Special Teams had the Pats best play of the day. Ryan Allen punted for the far left corner of the end zone. The ball bounced and appeared to be rolling toward the Steelers’ end zone. Jonathan Jones dove and popped the ball straight up. The Rex Burkhead dove into the end zone and knocked the ball out of the air to be downed at the Steelers’ one-yard line. It was a fantastic effort all around.

Allen was excellent all game with his directional punting but got flagged on a false start… as a holder for a field goal. I can honestly say that I’ve been following the NFL for over 50 years and have never seen that one before.

Stephen Gostkowski nailed his only field goal attempt after having a rough afternoon in Miami last week.

The Patriots coaching staff has a dilemma, which I don’t think is fixable…this year. How can this team play so well at home and be so undisciplined and terrible on the road? It is an issue that may eventually cost them in January. They certainly are capable enough of playing well against good teams.

Once again, the play calling and some of the personnel packages are mystifying. The Steelers were flooding the middle of the field and trying to take away where the Patriots like to work. So on a 3rd and 4, why call a bubble screen to Edelman with only Chris Hogan out there to block for him. The Steelers had too many bodies there and that one had little chance of success.

And on the final series, Josh Gordon wasn’t even on the field as they went with Patterson, who isn’t the route runner Gordon is…head scratcher.

Follow me on Twitter @SteveB7SFG or email me at [email protected]
Listen to our Patriots 4th and 2 podcasts on blog talk radio as the writers Russ Goldman, Derek Havens and I from PatsFans.com discuss the latest Patriots news.