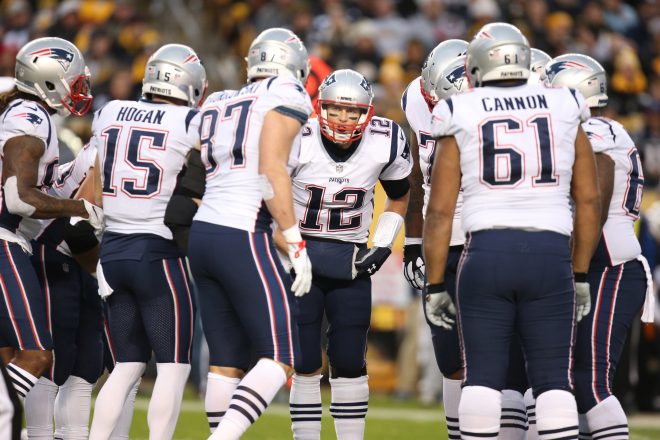 PITTSBURGH – After Sunday’s loss in Pittsburgh, it’s safe to say this year is most definitely different than any season in recent memory.

Normally, the Patriots win this game easy.  They held the Pittsburgh Steelers to only 17 points.  Ben Roethlisberger had two interceptions.  Mike Tomlin had a coaching brain cramp at the end of the first half.  Chris Boswell had still another missed field goal.  Tom Brady had the ball with just over two minutes left and a chance to send the game to overtime, and that’s like betting on the Harlem Globetrotters to beat the Washington Generals.  All this and no LeVeon Bell or James Conner at running back.  A Globe article proclaimed that the Patriots have the Steelers’ number and that the Steelers are “beaten before the game starts”.

Unfortunately, this year is different.

The Patriots still cannot stop the run.  The Patriots committed 14 penalties, many of them of the pre-snap variety.  Patriot receivers dropped key passes.  In the end, a late rally by Brady fell short, and Pittsburgh pulled off a somewhat shocking 17-10 win over the Patriots on Sunday at Heinz Field.  The Patriots lost in a kooky way last week at Miami, but this week this was definitely a downer for the reigning AFC champs.

Yes, this year is definitely different.

The loss once again prevented the Patriots from clinching the AFC East, as Miami was throttled earlier in the day at Minnesota.  The loss also drops the Patriots to the three seed, vaulting Houston into the two seed.  Pittsburgh barely holds on to the lead in the AFC North; a loss would have put Baltimore in the four seed and dropped Pittsburgh to the eight seed.  With all this playoff mojo working, such a scenario always favors the Patriots.

But still, this year is definitely different.

Let’s begin with the opponent running the ball.  No Bell, no Conners, so Pittsburgh trots out some guy named Jaylen Samuels.  All this rookie from North Carolina State did was rush for 142 yards on 19 carries for a 7.5 yard per carry average.  This is simply unacceptable for the Patriots.  All the defense had to do was to make sure that Antonio Brown and Juju Smith-Shuster don’t beat you, and the front seven should be able to handle Samuels.  But that was hardly the case.  He was so good, Tomlin didn’t have to try ex-Patriot Stevan Ridley, who had 16 yards on three carries and zero fumbles.

On the opening drive of the game, Samuels had 50 yards from scrimmage on five touches.  This helped Roethlisberger find Vance McDonald from five yards out for a touchdown and a quick 7-0 lead.  Samuels had only three touches for the rest of the half, but two of those touches went for ten or more yards.

The most damaging play of the night came on the final offensive possession for the Steelers (not counting the kneeldown at game’s end).  Needing a stop to get the ball back and keeping the deficit at four points, the Patriots had Pittsburgh third and nine at their own 26.  Roethlisberger rolled right, couldn’t find anyone open, then at the last minute found a wide-open Samuels at the sideline for a backbreaking 20-yard catch.  The drive continued until Boswell nailed a 49-yard field goal to make it 17-10.

Over the last three games, against Minnesota, Miami and Pittsburgh, the Patriot opponent has averaged 7.3, 9.0 and 6.3 yards per rush respectively.  The Patriots are simply a team that cannot stop the run.  Normally, the Patriots can stuff runs at the line and worry about pass coverage, especially in games in December and January.

Except this year, things are different.

Penalties killed the Patriots, especially a lot of false starts, but a few in particular were very damaging.

On the first offensive possession of the second quarter, Sony Michel ripped off three runs for 18 total yards.  The fourth carry was a nifty left end run for 25 yards and would have put the Patriots at the Pittsburgh 31.  But Trent Brown was called for holding, and the drive stalled two plays later.  The Steelers had just taken a 14-7 lead on the previous drive, and this penalty stopped what was becoming a shootout between Brady and Roethlisberger.

On the final drive for the Patriots, Brady was able to drive the Patriots to the Pittsburgh 11 with about 30 seconds left.  Michel ran for about six yards to the Steeler 5, but Shaq Mason was called for holding.  With the ball now at the 21 and time running out, Brady threw three straight incompletions and the game was over.

Which was another reminder that, with two weeks left, this year is definitely different.

On the previous drive in the fourth quarter, Brady suffered a hideous interception which also made the end game difficult.  With the score still 14-10 Pittsburgh, Brady drove the Patriots to the Steeler 5-yard line.  On first down, Marcus Cannon was called for holding.  James White was then nailed for a two-yard loss on a left flat pass.  With the ball now on the 17-yard line and second and goal, Brady rolled right to avoid a sack, but then hurried a throw off his back foot to the right sideline.  Thinking Rob Gronkowski was there for a jump ball, cornerback Joe Haden jumped up and made the pick at the Steeler 4.

Needing a three and out that deep in Steeler territory, instead they give up the winning field goal by Boswell.

Yes, this year is definitely different.

Normally that would be enough to win, but for some reason, this year has been a little different.

Tomlin was snookered by Bill Belichick at the end of the first half.  Seemingly wanting to go for it on fourth down, at the last minute the Patriots switched and put out their punt team.  Tomlin never called time out.  Pittsburgh got the ball back but could only take a kneel and end the half.  The Patriots had to begin the second half with a touchdown.  Nope, five plays and a punt.

In past years, they would have closed out the half with points and opened the 3rd quarter with another score. But this year, things are a little different.

Next week the Bills come to Foxborough, followed by the Jets.  The Patriots have a good chance to finish 11-5.  But the Patriots haven’t lost 5 games since they lost 6 in 2009, the same year where a camera crew followed Belichick around all year, and they caught Belichick in New Orleans lamenting to Brady that he couldn’t reach his players that year.  Maybe Belichick and Brady will have a similar chat this year.

Both of these last two weeks, the Patriot opponent played poorly enough to lose.  Miami was trailing at the end of the game before the crazy play, and Pittsburgh was typically mistake-prone at home against the Patriots. They should be 11-3 and thinking about Kansas City losing one more game along the way and reclaiming the one seed.

Unfortunately, that’s just not the case. For now, it’s just time to accept the fact that, whether we like it or not, this season is simply different.

READ NEXT:
Steelers Down Patriots 17-10, Knock Them Out of a Bye
Posted Under: 2018 Patriots Regular Season