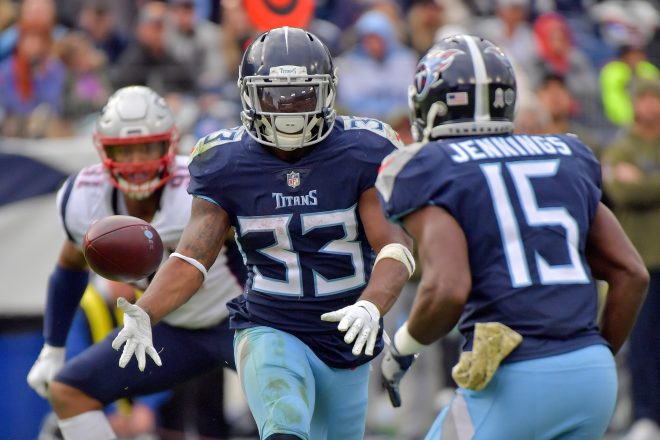 Following the Tennessee Titans 34-10 victory over the New England Patriots, running back Dion Lewis turned some heads with some emotional postgame comments about his former team.

Is it personal, Dion Lewis? ‘hell yeah it’s personal. That’s what happens when you go cheap. You get your ass kicked.” The #Titans RB very happy about beating his former team #patriots

One more from my line of questioning w/ #Titans RB Dion Lewis, "I didn't have to prove anything. I know I can play. I just had to let our team know that these guys are beatable…I know those guys. I know that you be physical with them & let 'em have it & they'll fold." #Patriots

Lewis didn’t stop there, on his Twitter account he also shared some “trolling” tweets that contained laugh emoji’s and .gifs that were seemingly directed towards the Patriots.

So what caused Lewis’ surprise criticisms of the “cheap” Patriots? According to multiple reports, his strained relationship with the team wasn’t new and began in 2017 training camp.

Come the playoffs, however, Lewis' touches were down. The Patriots were never serious contenders with him in free agency. He's a guy that always carries a chip on his shoulder. It was like that when he came to NE and it's like that now that he left.

One thing I always liked about Dion is that he was publicly quiet with his bottled rage. He seemed baffled that they made him earn the job last season but he didn’t complain. Then they didn’t reward his success. There’s some old wounds here. https://t.co/enjDuTEs1D

With a chip on his shoulder, Lewis wound up leading the Patriots with a career-high 896 rushing yards after being originally told he wouldn’t be guaranteed a spot that summer. He became the top back by Week 5.

However come the 2017 playoffs, his usage dramatically dropped following the return of Rex Burkhead from injury. In Super Bowl LII, Lewis logged just 39 rushing yards and had zero receptions.

Lewis would sign a four-year, $19.8 million deal with Tennessee during the first week of free agency in March 2018. The Patriots were never serious contenders to sign him.

During his time in New England, Lewis was a valuable asset to the teams success, the Patriots went 32-3 when he played and 13-7 when he didn’t. Unfortunately in the end, Lewis wanted to stay, and the Patriots wanted to part ways. Although Lewis was ultimately rewarded for his efforts, it wasn’t by the team he hoped.