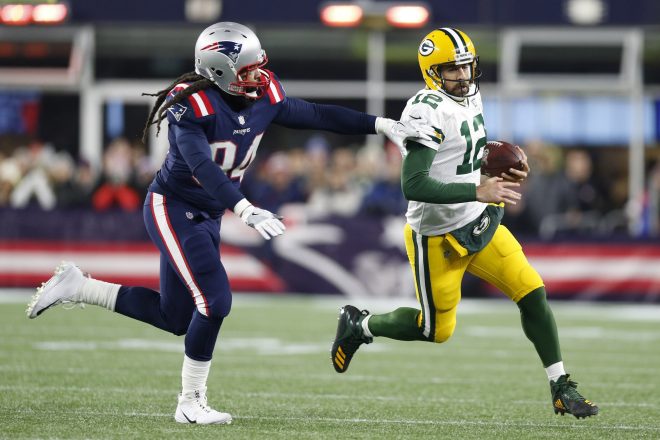 It was a strong effort on both sides of the football during the Patriots win over the Packers Sunday night, and here are some things we came away from the victory.

1) A Solid Effort on Defense – While New England’s defense didn’t get much credit for their effort last Sunday against the hapless Buffalo BIlls, they came up with a terrific performance against Aaron Rodgers and the Packers offense.

They kept Rodgers off balance and were able to put pressure on him during much of the first half, forcing him out of the pocket and making things difficult on him.  His best performance came in the 3rd quarter where he completed 6-of-9 for 121-yards overall and a touchdown, but from there, New England’s defense held him to just 2-of-7 for 15-yards in the fourth quarter.

One other number that stands out was the fact that while Rodgers threw two touchdowns, the Patriots held him to just  3-of-8 passing in the red zone.  That was big, especially early on when the Packers were held to a field goal on their first possession of the night, which came after the Patriots opened the game with a touchdown

But the biggest play of the evening came in the fourth quarter after Rodgers completed back-to-back passes of 24-yards and 26-yards, which had them back in Patriots territory with a chance to retake the lead with the score tied at 17-17.  But Lawrence Guy forced a fumble by Packers running back Aaron Jones, with Stephon Gilmore recovering the football which sent the fans at Gillette Stadium into a frenzy as it killed the Packers drive and gave the Patriots the momentum and a chance to take back the lead.  From there, Tom Brady engineered a 10 play, 76-yard drive that was highlighted by a backward pass to Julian Edelman, which the receiver turned around and fired a pass to James White.  White then took off 37-yards down to the Packers 2-yard line and two plays later, he took it into the end zone to put the Patriots back up 24-17 with 10:06 left to go in the game.

And it didn’t stop there.  The defense forced a 3-and-out on the ensuing drive and when the offense got the ball back, Brady hit Josh Gordon for a 55-yard touchdown on the 3rd play from scrimmage, which put the game away at 31-17.

It was a terrific performance by a group that hasn’t gotten much credit for how much they’ve improved.  After beating Rodgers and the Packers, hopefully they’ll keep it going next Sunday down in Tennessee. 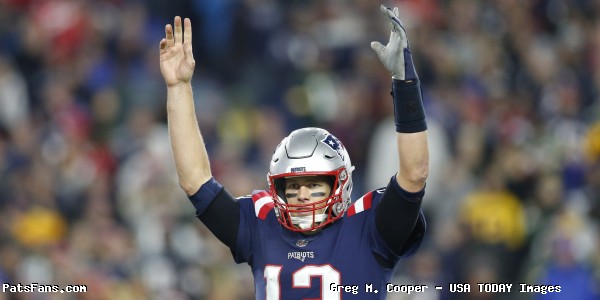 2) Brady finished with the better night – While the two veteran quarterbacks exchanged blows through the early part of the game, it was Brady that managed to pull things together in the key moments and that ended up being the difference in this meeting.

Brady actually got better as the game went on and finished a perfect 6-of-6 for 104-yards and a touchdown in the final quarter after the Patriots scored on back-to-back drives to put the game away.

As noted previously, Rodgers was a paltry 2-of-7 in the fourth quarter for just 15-yards and wilted against a New England defense that kept bringing pressure all night.  Brady dealt with similar pressure, but he never got rattled and there was never a point where the offense seemed like they might be in trouble, even when Brady went through a stretch where he missed six straight throws.

For a player who is known for his fourth-quarter heroics, Rodgers certainly came up short.  If there’s any question among the critics when it comes to which QB is currently the best in the league, Brady clearly proved that he’s still on top after his strong finish.

3) A Gutsy Performance By Gordon – While Josh Gorfon finished the night with 5 catches for 130 yards and a touchdown, his numbers really don’t tell the story for what he managed to to do Sunday night.

What was most impressive for Gordon is the fact that he jammed his finger early on in the contest and spent multiple times during the course of the evening popping the finger back into place in between receptions.  It was quietly a gutsy performance and it was huge as he made some big plays, with none bigger than the 55-yard reception where he beat his defender and then took off for what ended up being the game-clinching score.

It was Gordon’s second 100-yard performance in his last three contests, with the veteran receiver settling in well in the offense.  He’s done a good job of gaining Brady’s confidence and already has moved into third place on the team in receiving yards with 396, trailing White (531yds) and Rob Gronkowski (448yds).  But the fact he battled through what he was dealing with Sunday night and didn’t miss a beat, it was one of the more impressive performances we’ve seen in a long time and it helped them weather the absence of tight end Rob Gronkowski, who missed the contest due to injury. 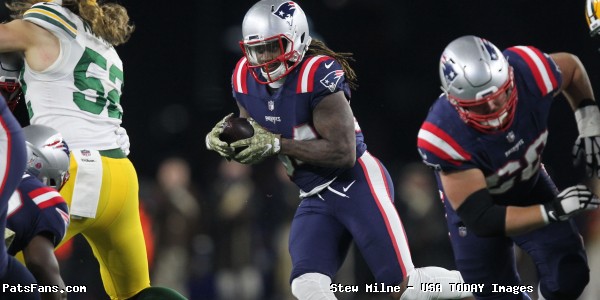 Another strong night for Patterson.

4) Patterson steps up again – After seeing time at running back last week against the Bills, receiver Cordarrelle Patterson came up big again on Sunday night.

Following a knee injury that knocked him out of action early in the game, James White’s loss seemed like it might derail the offense and change the course of the game.  But Patterson came back in and ran hard, picking up gains of 15 and 17 yards before capping the drive with a 5-yard touchdown run that put the Patriots up 17-10 at the half.

That was key as had New England struggled and failed to take the lead, it could have given the Packers some momentum and allowed them to take control of the game.  Instead, Patterson’s ability to help out allowed the Patriots to weather White’s injury and ultimately win the game.

Patterson finished the night with 11 carries for 61-yards, along with his touchdown.  For a player who started off slow, he’s come on strong and his contribution in the running game has been a terrific addition.  Fans are used to the “next man up” mentality but after what we’ve seen from the former Raiders receiver, what Patterson has managed to do these last two weeks is nothing short of remarkable.

5) Allen was big in the field position game – It’s not often that punters play a big contribution in a football game, but Sunday night proved yet again how important this position is and how lucky the Patriots are to have a good one.

While he only punted three times, Ryan Allen played a big key in Sunday night’s game in terms of the Patriots winning the field position battle.  Of his three punts, he averaged 49.7 yards per punt and two were inside the 20-yard line, which forced Green Bay to consistently have to put long drives together against New England’s defense.

His final two trips on the field saw him first hit a 50-yard punt on a 4th-and-21 at their own 27, but the Packers were called for roughing the kicker, which gave New England a new set of downs.  However, after the drive stalled again, Allen came through one more time, hitting a 44-yard punt that pinned Green Bay in at their own 7-yard line.

It was a solid outing and it’s the type of performance that tends to fly under the radar for a position that doesn’t get a lot of attention.  But thankfully Allen’s consistency remains one of the big intangibles that New England is fortunate to have and it quietly played a key role in the win.

The victory puts Patriots at 7-2 on the season and they’ll now get ready to head to Tennessee to take on the Titans next Sunday at 1pm.