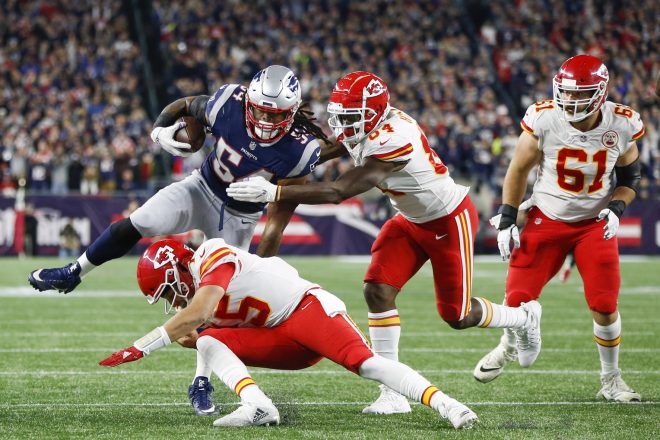 Coming into the game, in the Belichick/Brady era, the Patriots were seeking to move to 24-0 at home in the regular season against rookie quarterbacks. Chiefs standout rookie Patrick Mahomes stood in the way.

Back at it again. #Gameday #LFG

Gillette Stadium’s new lights are something else. pic.twitter.com/HRsoUTelif

With Dont’a Hightower’s interception, the Patriots now have an interception in 6 straight games. The last time that happened? 2013. #WBZ

Running back Sony Michel continued his hot pace, becoming the first Patriots rookie to record a rushing touchdown in three straight games since Benjarvus Green-Ellis in 2008.

After the Chiefs responded with their second field goal, the Patriots led 10-6 after the first quarter.

In the second quarter, the Patriots opened the scoring when Tom Brady found Julian Edelman for his first touchdown reception of the season, his first since the 2016 AFC Championship game. 17-6 Patriots.

First touchdown reception for Julian Edelman since Jan. 22, 2017, against the Steelers in the AFC title game.

“Got a lotta people tryna drain me of my energy.”

Brady yelling at Gronk to stand up lmfao pic.twitter.com/IU8rVq1moi

First #Patriots rookie with a two-TD game since Laurence Maroney in 2006.

A reminder: The #Patriots have won 88 straight games when leading by 14 or more points at the half. #Chiefs

In the third quarter, Patrick Mahomes and the Chiefs began their comeback, with Mahomes finding Kareem Hunt deep for a 67-yard touchdown to close the gap to 24-16.

After another Chiefs field goal to cut their deficit to 27-19, the defense also made plays, forcing a Brady fumble that led to another touchdown.

With a minute to play in the third, Mahomes found Tyreek Hill to make it a one point game at 27-26 after three quarters.

Although the Patriots opened up the fourth quarter with a field goal to push the lead back up to four at 30-26, the Chiefs kept the pressure on following this 97 yard kick return by Tremon Smith.

Tremon Smith takes off on a 97-yard kickoff return to set up the go-ahead @Chiefs TD. #KCvsNEpic.twitter.com/F1xQ9yQ0gg

The return setup a Mahomes to Hill 1 yard touchdown pass to give the Chiefs their first lead of the night at 33-30.

Patrick Mahomes finds Tyreek Hill in the end zone and we take a 33-30 lead. pic.twitter.com/pEsyHytf94

Needing to respond, Brady and the offense drove down the field on the following possession, enter Chris Hogan.

Tom Brady going all Snow Bowl on the Chiefs. That was pretty cool.

With the Chiefs trailing by seven following another Patriots field goal, with three minutes to go in the game Mahomes again attacked the Patriots secondary and found Tyreek Hill for a 75-yard touchdown to tie the game at 40.

The Patriots have allowed 40+ points just three times in the regular season since 2013:

The good news, the Patriots had three timeouts and plenty of time…oh and some guy named Tom Brady.

With 3:03 to go in the fourth, Brady marched the Patriots down the field with a little help from his tight end.

The drive setup a 28-yard field goal attempt by Stephen Gostkowski, who drilled it for the 43-40 victory.

The most wins by any @NFL player, at any position, ever.

Patriots have now played 12 games against a team with a better record since 2009. They have won all 12.

More impressive than 12-0: only 12 times over the past 150 games has the Patriots’ opponent had a better record.

Tom Brady is the first quarterback in NFL history with 200 career wins@Patriots pic.twitter.com/Ce2ZclQYap

The 🐐. Not ready to relinquish the 👑 yet. #Patriots with a HUGE last-second win vs the (previously) undefeated Chiefs pic.twitter.com/W5B7ubdsYG

Great win fellas, not pretty but a Win is a Win #TGBTG

That's what you call a TEAM win. Onto the next one. pic.twitter.com/iCadEVh2uo

By: Robert Alvarez
Patriots Chairman and CEO Robert Kraft is honored by two organizations for his charitable and humanitarian work.
7 hours ago

By: Robert Alvarez
Bill Belichick issues a statement praising Vince Wilfork following his selection into the Patriots Hall of Fame.
9 hours ago

By: Russ Goldman
In this episode, Steve and Derek break down the 2022 Patriots regular season schedule. The guys also discuss Vince Wilfork's election into the team Hall…
19 hours ago