4 years ago at 5:00 am ET
Follow @IanLogue
Posted Under: Uncategorized 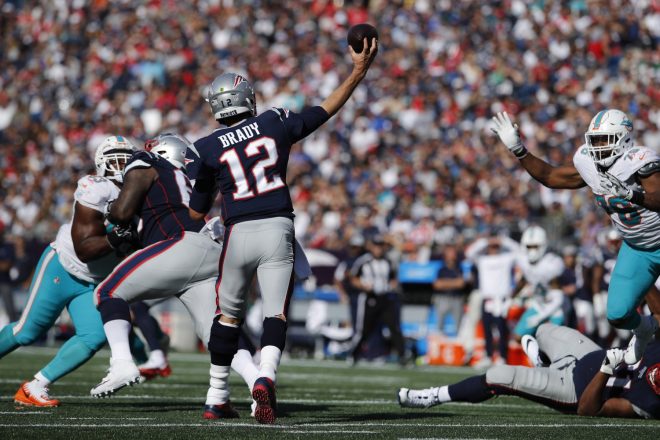 For some strange reason, the first quarter has been a big problem for Tom Brady this season.

Brady came into Sunday’s game against Miami having completed 12-of-23 (52%) for 113-yards along with a touchdown and an interception in the opening quarter, with the first quarter having been the only quarter where he had a completion percentage under 60%.

Brady’s Stats By Quarter Prior to Sunday:

It’s surprising given that last season, Brady’s best quarter was the first quarter after the veteran completed 106-of-149 (71.1%) for 1143 yards during the regular season, including 7 touchdowns and 2 interceptions.  It was the only quarter where be completed 70% or better throwing the football, which certainly makes what we’ve seen so far a little unusual.

Brady has always emphasized the importance of a fast start and thankfully the offense pulled away in the second quarter after putting up 21 points, which allowed the Patriots to play the game on their terms.

Despite their slow start, Brady credited the play of New England’s defense for allowing them to work through it and he said it ended up being a big key in the win.

“Yeah, they did a great job and I think they didn’t give up many third downs – maybe one or two today,” said Brady.  “I mean, any time you play like that – I mean, we’ve been on the other end of that the last couple weeks where we didn’t do well on third down and we’re not out there and the other defense is out there, and I mean, that’s tough to play that way. But, they made some great plays when we needed it, too, and it was great to see them play that way.”

Hopefully, their first quarter woes will improve this week with Julian Edelman set to return and Brady told reporters he’s looking forward to having him out there.

“You know, it will be great to have him,” said Brady. “I mean, we haven’t seen him in four weeks, but I know he’ll be ready. And it’s a short week, so I’m sure he’ll be in here ready to go. Everyone loves Jules and loves having him back.”

READ NEXT:
Patriots Smash Dolphins 38-7 In Dominant Fashion, Three Up, Three Down
Posted Under: Uncategorized