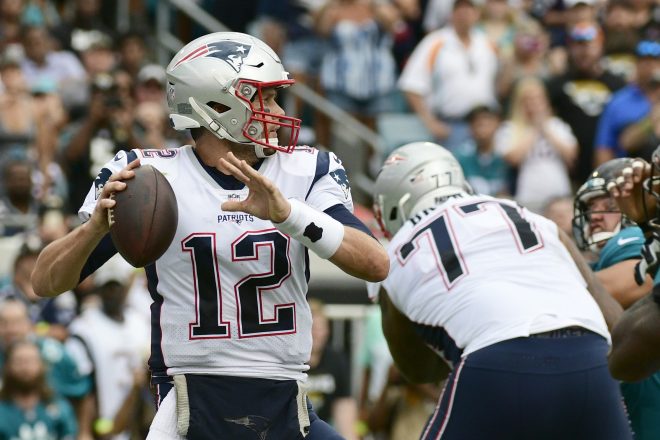 The New England Patriots head back out on the road to take on the Detroit Lions on Sunday Night Football. Former Patriots defensive coordinator Matt Patricia is in his first year as a head coach of the Lions and is off to a rough start, going 0-2 to start the season.

The Patriots also lost last week in Jacksonville dropping them to 1-1 on the season and they’ll be looking to rebound. The Patriots defense will probably be without two of their best defensive players in Trey Flowers and Pat Chung who were in the concussion protocol all week and haven’t practiced.

The Patriots under Bill Belichick have been outstanding at limiting losing streaks and are 45-6 in games following a loss since 2003 and have been 51-13 against NFC opponents since realignment in 2002.

The Lions with Matthew Stafford, Golden Tate, Marvin Jones, Kenny Golladay, and Theo Riddick out of the backfield offer a serious challenge defensively, especially with the players missing this week. The Lions defense has eight sacks already and got six last week against Jimmy Garoppolo and the 49ers.

The Patriots rookie running back got into his first NFL action last week after missing all of the preseason and the first regular season game. This week should show a big uptick in his usage and he should probably be a big part of the Patriots game plan this week.

The Lions run defense has been gashed badly the first two weeks of the season. And look for the Patriots to try to take advantage of that fact with the very promising and explosive Michel.

Last week in shaking off the rust, Michel had ten carries, we look to see him get about double the touches this week between rushing the football and receiving out of the backfield with James White and Rex Burkhead.

The Patriots newest addition to the team just got on-board this week after coming over in a trade with the Cleveland Browns. He is still trying to learn the offense, (not surprisingly after just a few days of practice) and to boot hasn’t been 100 percent physically as he tweaked a hamstring last Friday.

In our pregame matchups, we wrote that we thought he’d be unlikely to play. But many of the national and local media types keep saying that although he’s not 100 percent that they believe the Patriots will install a small package of plays to get him on the field.

If that indeed is the case, then, of course, all eyes will be on the big, physical and athletic wide receiver. As to what he can bring to the table in such a short amount of time? No one knows and we’ll just have to wait and find out.

The Patriots picked up the very talented kick returner/wide receiver this offseason and he hasn’t been able to showcase any of his talents much in the return game. Jones was originally the Pats top pick a few seasons ago and tore his ACL last August before being released in September. He was a member of the Ravens practice squad but the Patriots signed him to the active roster just this week for his punt return abilities.

Both could play key roles this week. The Lions coverage units have allowed a 90-yard kickoff return and 74 and 43-yard punt returns already this season. This would be a primetime perfect time for the special teams’ units to break out and give the team a boost.

We’re looking for both of these players to make a splash on Sunday night. The Patriots special teams are always one of the strengths of this team and thus far, they’ve underperformed as to what we expect from them. A national television game is a perfect time to fix that and put some production on the board.

The Patriots top rookie draft choice a year ago, also tore his ACL last August and was lost for the entire rookie season. He’s worked his way back and had a pretty good training camp but was passed on the depth chart by fellow DE Keionta Davis who also missed his rookie season of 2017 with a neck injury.

But with Flowers unlikely to play with a concussion, Rivers should be in line to make his professional debut on Sunday night in Detroit. It will be intriguing to see what he can bring to the table in terms of rushing the passer this week. He’s waited a long time to get on the field. Now maybe a chance to show what he can do.

With Pat Chung likely out with a concussion, McCourty should see a big uptick in usage this week at the safety spot. Chung is an excellent tackler and always does a solid job of defending the tight ends so the “other” McCourty brother will have his work cut out for him this week.

McCourty could also see significant snaps at corner. When Eric Rowe was sat down last week in Jacksonville, McCourty came in and played nearly three-quarters of the snaps. Now Rowe is on the injury report with a groin issue and he’d normally be assigned the bigger Golladay (6’4, 213) to cover.

So depending on how the coaches see this week playing out in terms of player matchups McCourty could play significant snaps at either corner or safety, perhaps a bit of both. But he’ll definitely see the field quite a bit on Sunday night.

The Patriots tight ends may be a significant part of the game plan this week. Gronkowski had only two catches a week ago as the Jaguars used two, sometimes three different defenders to take him away. The Lions defense isn’t as deep as Jacksonville’s and they can’t afford to put that much capital to defend one man.

On a big national stage, we’re looking for Gronkowski to make a big rebound and for Tom Brady to try to get him involved early and often in the Patriots offense. It will be interesting to see how the Lions plan on matching him up.

For Hollister, the Patriots 2nd year tight end is a very good receiver in his own right and has the ability to stretch the field down the seams. We’re looking for Josh McDaniels and Brady to get him more involved this week. With the preponderance of the defensive effort geared to stopping Gronkowski, Hollister could have a nice productive game and we’ll look for Brady to get him more involved.