4 years ago at 10:52 pm ET
Follow @bob_george
Posted Under: Uncategorized 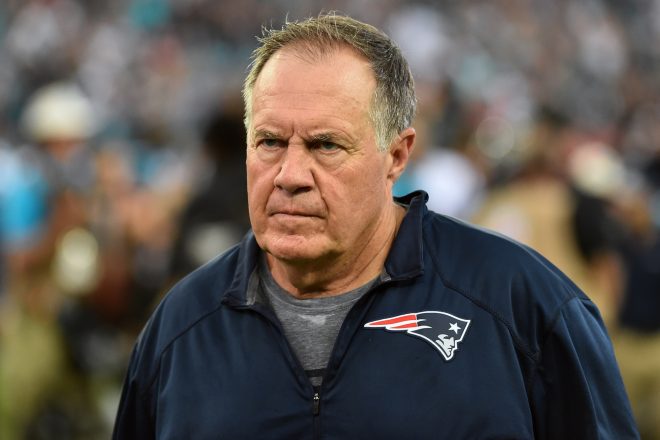 JACKSONVILLE – The good news is that the Patriots don’t have to play Miami in Florida until December, when it’s cool and comfy.

The bad news is that the Patriots still had to play a September game in Florida anyway, as the NFL has three cities in Florida and not just Miami.

On a wretched 97-degree day in north Florida, with humidity pushing the heat index to 107 degrees at kickoff, the Jacksonville Jaguars, exacting revenge on the team that beat them in January for the AFC Championship, outlasted the Patriots 31-20 at TIAA Bank Stadium on Sunday. The Patriots were gassed from the start, wilting in the Florida heat like they have done so many times in Miami in September over the years.

For the Jaguars, the win marked the first time the franchise had ever beaten the Patriots in a regular season game.  The only time Jacksonville ever beat the Patriots was a 1999 AFC Divisional Playoff game at this stadium (named Alltel Stadium back then), a 25-10 win where the Patriots had Pete Carroll as head coach, and were forced to start Scott Zolak at quarterback in place of an injured Drew Bledsoe.

Suffice it to say that if this game was played in a cooler weather month, the Patriots probably either win this game or lose a close one. Despite their world class defense, quarterback Blake Bortles played just well enough to win, and was able to get into a rhythm mostly because the tired Patriots allowed him to. There was no pass rush to speak of, receivers were getting open when normally they wouldn’t be, and despite the Patriots being the benefactor of two gift turnovers in the second half, the Patriots coughed up the ball on a strip sack to basically seal the deal.

The Patriots didn’t look bad, just tired. Jacksonville outplayed the Patriots only because they had more energy and more zeal in winning the game with memories of January fresh on their minds. All the trash talk Jalen Ramsey brought on during the week was really a non-factor, as he was involved in very few key plays and Rob Gronkowski was held down by other players.

At times, the Patriots did themselves in with carelessness. Lined up for a punt midway through the fourth quarter, on fourth and one at their own 18, Telvin Smith jumped offside, but the left end failed to touch him while offside and thus denying the Patriots a gift first down down 24-13 and rallying. Tom Brady suffered a strip sack on the previous possession, which literally negated two takeaways by the Patriots to climb back into the game. The previous drive ended when Cordarelle Patterson fell down on a bubble screen left which would have gotten them a first down instead of a Stephen Gostkowski field goal.

On the play preceding the failed offside play, the Patriots were stopped one yard short of the first down at their 18. A replay challenge negated a first down, and Bill Belichick elected to punt. Perhaps the Patriots should have gone for it, despite nearly causing an offside. On the ensuing play, Dede Westbrook took a pass on a crossing route from right to left, turned upfield towards the left sideline, blew by Ja’Whaun Bentley and got a great block by Cole, and took off on a 61-yard touchdown pass to cement the win. Going for it on fourth and one down 24-13 might have been the better option, especially given the fact that Jacksonville scored anyway.

Give the Jaguars credit for playing well, as they also had to deal with the oppressive heat. In the first quarter, facing first and 15 at their own 24, Bortles lobbed a left sideline pass to Keelan Cole. Cole made a one-handed grab which looked like Odell Beckham Jr., despite great defense by Eric Rowe. Three more plays for double-digit yards gave Jacksonville a 14-0 lead, with Cole hauling in a left sideline pass from 24 yards out for the score.

The Patriots can certainly use this game to assess the team, correct mistakes, and move on. This sort of early season loss has happened in recent years, and often times helps the Patriots a great deal. The demoralizing loss to Kansas City in 2015 turned into the linchpin for the eventual Super Bowl championship, for instance. Belichick will no doubt mumble “We’re on to Detroit” all week long, but the Lions, who have begun the year 0-2 under former defensive coordinator Matt Patricia, will have their hands full with a Patriot team bent on redemption and who will know better than the Jets last week what the Lions will do on defense.

An indication that it really wasn’t a terrible day overall for the Patriots is that Brady finished with a 106.1 passer rating, completing 24 of 35 passes for 234 yards and two touchdowns. Bortles had only a slightly better rating at 111.1, on 29 of 45 passing for 377 yards and four touchdowns, with one interception on a tipped ball in the fourth quarter. Cole had 116 yards receiving to go along with the sick one-handed catch he made. James White was the leading receiver for the Patriots with seven catches for 73 yards.

The Patriots got a glimpse of the future with the NFL debut of rookie running back Sony Michel. The former Georgia Bulldog had 34 yards rushing on ten carries. Nobody on the Patriots averaged more than four yards rushing; T.J. Yeldon, filling in for the injured Leonard Fournette, had 58 yards on ten carries. The Patriots figured to tee off on Bortles without having to deal with Fournette, but they weren’t really able to do too much given the oppressive weather.

Plain and simple, Jacksonville caught the Patriots at the right time. Playing in weather the Patriots usually see in Miami yielded the predictable result. If the Patriots can finish ahead of Jacksonville at year’s end and get a rematch with the Jaguars in Foxborough, the Patriots most likely win again with a decided upper hand. Even if the game is played down here, the Patriots can win in Florida in December and January and should give the Jags a better game.

The Patriots still miss Julian Edelman, and still have some things to figure out. Against one of the best defenses in the league, this game will give Belichick and the assistant coaches plenty to pore over in the film room. Jacksonville was clearly the better team on Sunday, but the Patriots are experts at learning from losses like this and adjusting and improving on the fly.

Next week the Patriots will take on Detroit, and old friend Patricia. The Lions are having problems getting used to his coaching style and have dropped their first two games, including a 48-24 home loss to the Jets in the season opener. The Patriots will be well set up to right their ship and move forward, and should look better against a Lion squad that has no idea who and what they are.

So, here’s to no more heat and humidity for the rest of the year. The Patriots return to south Florida in December. See you then, and hopefully the Patriots need to take less Gatorade with them.

READ NEXT:
Patriots Dismantled By the Jaguars 31-20, Three Up Three Down
Posted Under: Uncategorized