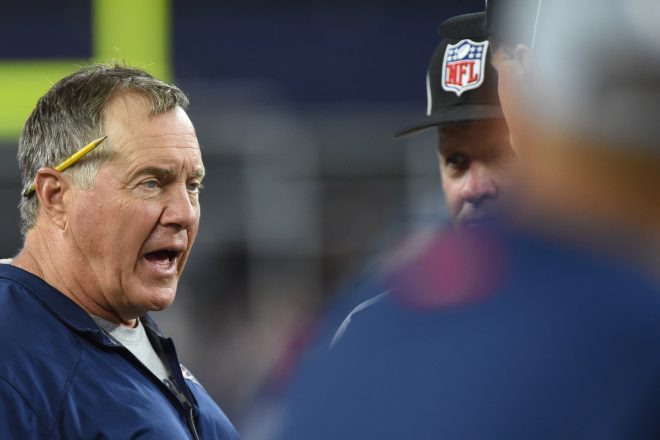 Checkout some of the best sights and sounds over social media from the teams come from behind victory over the Washington Redskins.

Brady and Gronk in the building for tonight's preseason opener. Everyone's in a good mood, football is finally back. #Patriots

Offensive tackle Trent Brown circles the field in the pre-game. He has been the team’s top left tackle through the initial stretch of training camp practices. pic.twitter.com/yp9co7HhRk

Punter Ryan Allen is the first Patriot in uniform on the field pic.twitter.com/ASW2lh0kZM

As the Patriots took the field for pre-game introductions, WR Julian Edelman led them out in a full sprint. He leaped in the air and pumped his fist at the end of his sprint, clearly fired up to be back from a torn ACL that sidelined him in 2017.

The #Patriots are on the field. Let’s say Julian Edelman is…. pumped. pic.twitter.com/3hegf95BB0

It was an ugly first quarter for the Patriots offense as they failed to get much going.

The Redskins took a 10-0 lead after a quarter of play.

In the second, Redskins quarterback Colt McCoy continued his hot start, and Washington added to their lead. 17-0 midway through the quarter.

Nice release and widening of the route by Cam Simms to work into the C2 hole between CB and safety. Great ball by McCoy to hit that hole. Simms then breaks a tackle to turn it into a huge gain. #Redskins pic.twitter.com/DU5X6BueKu

With the clock winding down on the first half, backup quarterback Brian Hoyer finally found rhythm and the Patriots got on the board heading into the half following a 52 yard Stephen Gostkowski field goal. 17-3 Washington.

Heading into the locker room at halftime, head coach Bill Belichick was in regular season form when he was asked about his teams first half performance.

The Patriots came out firing to open the second as running back Jeremy Hill tallied the teams first touchdown of the new year and cut the deficit to 7 at 17-10.

Nice drive to start the second half, with Jeremy Hill scoring a TD from 1yd out to finish a 19 play, 84yd drive that lasted 10:16.

JEREMY HILL TOUCHDOWN! Has been the best running back all night for the #Patriots! #WASvsNE pic.twitter.com/FsoTdrrrYG

In the fourth quarter the Patriots still found themselves trailing by seven, but newly signed wideout Cordarrelle Patterson hauled in his highlight catch to put the patriot in position to tie the game.

Cordarrelle Patterson's been making those kind of catches all summer.

2018 Undrafted free agent Ralph Webb found the end zone to get the Patriots back in the game, however they weren’t looking to tie.

Ralph Webb touchdown! WE GOT OURSELVES A GAME! #WASvsNE #Patriots pic.twitter.com/J0i1mFPYhW

Hoyer again found Webb for a successful two–point conversion attempt and their first lead of the night. 18-17 Patriots.

#Patriots get a TD and a 2-point conversion from Ralph Webb, and have come all the way back from 17-0 down, the greatest comeback in team history. By far. #WASvsNE

Yes, it's the preseason, but that's impressive.

Who's making the t-shirts and flags and stuff? #Patriots #WBZ pic.twitter.com/BYL819PQ4K

An overserved member of the ticketholders is gonna wake up tomorrow without much of a voice. And probably just the memory of the Pats trailing 17-0.

With under four minutes to go in the game, the defense stepped up as Geneo Grissom scooped up a loose football and nearly scored.

Ralph Webb again found the end zone to seal the comeback victory for the Patriots.

Starting off the preseason with a W.

Just three guys standing around complaining about how hard it is to be so goddamn good looking. pic.twitter.com/DBv7wnUDYM

Nate Ebner was the biggest star of last night’s game without playing a snap. pic.twitter.com/98vjAX8e09

Turning what I love into a career, now that’s a dream come true