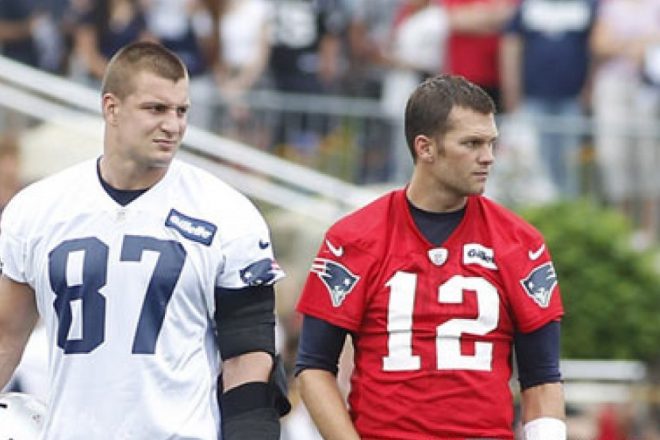 When you’re a rookie, the expectations here in New England don’t really change.

For young players coming out of college, it’s probably quite the role reversal.  You go from being top dogs on their own team to the bottom of the ladder in the NFL and if you’re an offensive player joining the Patriots, how you impress Tom Brady plays a major role in your development.

Rob Gronkowski likely knows that better than anyone.  When he came into the league, he’s admitted previously that Brady was tough on him.  He would be hard on him in meetings and push him on the field and it’s likely played a big role in Gronkowski evolving into becoming the best tight end in the game.

Every year, new players deal with the same thing.  Despite the fact he’s about to turn 41 this week, Brady hasn’t let up and he continues demanding excellence.  Although Gronkowski told reporters on Wednesday that he was probably a little tougher when he was younger.

“I’ve seen the same fire in him since I’ve been here,” said Gronkowski. “I would say probably back in the day he was a little more on you if you didn’t get it right, a little bit more in your face but I mean, he’s going on 41 now, I don’t see the – I feel like he backed off on that a little bit, which is nice.”

Gronkwoski admitted that when he was a rookie and getting started in the league, Brady made things tough.

“He used to be mean to me,” said Gronkowski.  “I’m glad he’s not to these young guys anymore.”

When asked how Brady was mean to him, Gronk replied, “Just was.”

This isn’t breaking news.  Gronkowski once said in his book “It’s good to be Gronk” that he actually thought Brady hated him.

“Tom Brady, the legendary quarterback that I had been watching on TV since middle school actually introduced himself to me,” wrote Gronk.  “I couldn’t know it at the time, but that would end up pretty much the nicest he was to me over the entire year. … If I made a mistake, Tom would blast me. In the meeting rooms he was super tough on me. I thought he didn’t like me.”

Fast forward to now and they’ve obviously become one of the most lethal duos in football.  They’ve also grown to become great friends, with Brady going as far as calling the tight end his “spirit animal”.

Hopefully, if all goes well, the two will be poised for another great year together.