5 years ago at 9:30 am ET
Follow @IanLogue
Posted Under: Uncategorized 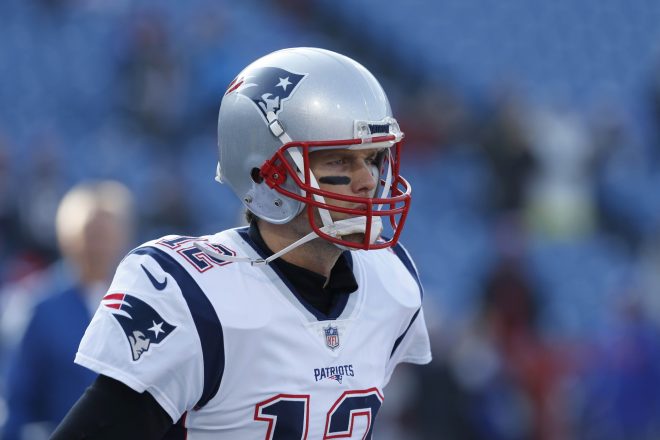 A quiet morning on this Thursday before the team gets set to practice this afternoon, but here’s a quick rundown of today’s top stories.

Kraft Says Brady Will Be Here for Mandatory Minicamp – While Brady’s absence during the voluntary portion of this week’s workouts has many buzzing, owner Robert Kraft attempted to quell any concerns on Wednesday about whether or not Brady will be here when it’s required.

Kraft spoke to reporters in Atlanta during the league’s spring meeting Wednesday and said he wasn’t concerned about Brady not being there this week.

“I think he’s very excited about the upcoming season,” said Kraft via ESPN. “These are voluntary workouts, and I think he’s in great shape. I think he’s at an age where — I was thinking back to when he joined us — he’s blessed to have three children now and built a number of businesses and has certain responsibilities. I think it’s very hard for him to fulfill those during the season and the commitment he has to football. I can only say this: I know he’s very excited about being at minicamp and having a very special season this year.”

Brady stirred the pot Wednesday by posting a photo of himself in practice gear with the caption “Dreamworks” along with a couple of emojis.

Jeff Howe of The Athletic pointed out via Twitter that Brady’s post was in reference to some of his “business commitments”.

Tom Brady’s Instagram post was in reference to some of his business commitments that he’s been fulfilling this week, which is part of what Robert Kraft mentioned this morning in Atlanta. As Kraft also noted, Brady and the Patriots have been in contact during the process.

If that’s the case, it should be interesting to keep an eye on to find out what is.  As for the photo, given that there was no session Wednesday and players can’t practice in pads, it’s likely just a reminder for fans lamenting his absence that he’ll soon be back in action.

Team Making Strides Toward a New Deal with Gronk – While Rob Gronkowski isn’t yet on the field during voluntary workouts, it sounds like he and the team are working some things out behind the scenes with his contract.

According to The Athletic’s Jeff Howe, the team appears to be getting closer to appeasing the veteran tight end from a contract standpoint, with Howe saying things have been “positive” during those discussions.

“It wasn’t disclosed if Gronkowski will sign an extension or simply earn a raise, either incentive-based or of a more straightforward nature,” wrote Howe.  “But since Gronk informed Bill Belichick last month of his decision to play this fall, the Gronkowski camp and the Patriots have worked toward a contract resolution. The tenor of those discussions has been positive.”

Gronkowski has reportedly been spotted working out locally this offseason while getting his body ready for the rigors of another NFL season.  All indications also seem to point to the fact that like Brady, Gronkowski should be on hand for the club’s upcoming mandatory workouts.

Former Patriot Upset Over NFL’s Anthem Policy – After the league announced a new policy on Thursday that will prevent players from kneeling during the national anthem, there were some who weren’t happy with the news and spoke about about the league’s attempt to stop the practice in 2018.

The NFL opted to walk a fine line with their new policy, allowing players to stay in the locker room instead of letting them kneel if they chose to do so on the field.  Former Patriot Matt Light wasn’t happy about what they come up with, saying the league made a mistake that is only going to make a bad situation worse.

“Before, it was never in our handbook. In league policy, it was never OK to not stand for the national anthem. So if you really think about it, they defined the right to not stand for the national anthem. It wasn’t that way before. In reality, they’ve literally defined, by policy, that guys can openly disrespect the men and women in our armed services by staying in the locker room.”

“It’s unfortunate. Look, you can’t make everyone happy. When you try to do that, you look terrible and you alienate a lot of people and it backfires every time.”

Light also said one of the mistakes the league made was not holding a dialog with players and he believes that’s an error that will likely cause a problem.  For now, Light points out that reporters will start reporting on those who are and aren’t there, which is going to make everything a mess.