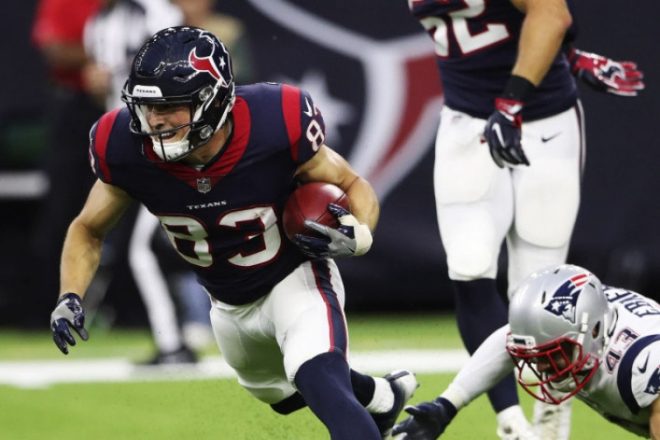 The loss of Danny Amendola will hurt the Patriots offense in 2018. You just can’t plug and play a guy who has the clutch production he’s had in the Patriots offense. Especially a guy who had the absolute confidence of Tom Brady. So with the veterans on the roster, Phillip Dorsett, Kenny Britt and running back, Rex Burkhead could join Brandin Cooks, Chris Hogan and the returning Julian Edelman as well as Malcolm Mitchell at the wide receiver position this season. If everyone is healthy, it will be a tough position to crack.

There is another player, a guy who is a dark horse to make the team that could be a guy to watch this spring and that is Riley McCarron.

McCarron is a 5’9’’, 185-lb slot receiver from Iowa who will draw comparisons to Wes Welker as soon as he catches a pass in training camp. That is bound to happen with just a look at him because he appears to be the prototypical slot receiver. And it isn’t fair nor right to compare him to Welker who had crazy production with the Patriots while here in Foxboro.

But the Texans who signed him as an undrafted free agent last season did exactly that. Texans head coach Bill O’Brien called McCarron “the spitting image of Welker” in training camp. O’Brien would know a bit about that. Not only did he coach Welker as a member of the Patriots. He hired Welker as an assistant coach on the Texans staff.

He is built like Amendola and tried to learn from him and pick his brain with every chance he got last season. When speaking to the media last fall, he spoke about the learning curve at the position.

“Obviously, Danny and I have kind of the same build,” McCarron said. “He’s in the slot, too. Any chance I can, I’ll try to pick his brain, ask him why he does one thing instead of another. I keep learning, and he always has an answer for something. … Trying to learn any way I can, especially guys who have done it and proven themselves for a long period of time.”

McCarron was a walk-on at Iowa who saw very little playing time his first three years. In his senior year, he was the leading receiver and caught 42 passes for 517 yards and four touchdowns in Iowa’s run-first offense. He excelled in the Hawkeye offense at getting open. And with his speed and athleticism, he could separate.

Look, McCarron like fellow WR Cody Hollister on the practice squad is a long shot to make the roster. But the Patriots just lost a guy who carved out a valuable niche in the slot and that position is still wide open. And he has the skill set to make it work.

His best chance is to turn heads during the spring OTAs, where even if Edelman and Mitchell are ready to go, will still be on a pitch-count where they’ll be reps to be had. There are a lot of veterans vying for the roster and he’ll face an uphill battle. But the rookie has another ace up his sleeve.

One of the other things Amendola did was return punts. With Edelman and Cyrus Jones on IR, he and Dion Lewis returned the kicks last season. Both are now gone. McCarron did return punts in a limited role at Iowa but had a 21.1-yard average and a 55-yard return for a touchdown. It all comes down to “the more you can do.”

The Patriots coaches, like Houston’s, are high on the kid, and it isn’t like we haven’t seen this before. With an opportunity, even among a crowded field at wide receiver, there is a chance to carve out a role and make the roster.

Check out some of McCarron’s highlight film from college: