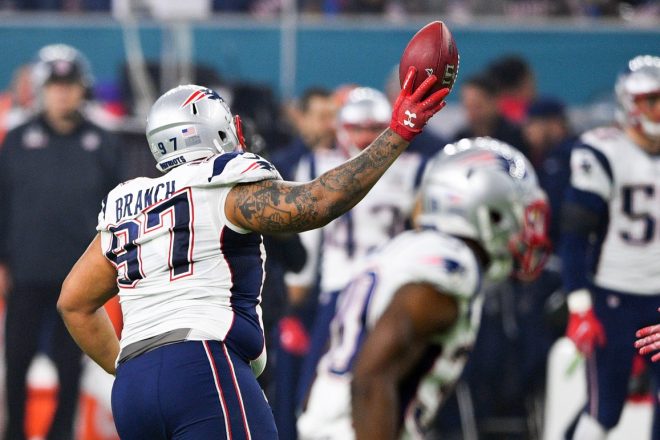 We’ve been posting our free agent profiles for the Patriots in the offseason of 2018 as we’re trying to come to grips who will return and who won’t. This post will look at who may not return this year.

It is interesting to note via our friend Miguel @Patscap, that the Patriots have just about $13 million dollars (13.14 to be exact) to work within the salary cap this spring. That isn’t nearly enough. So what do they do? Well for starters, they’ll approach a few players to re-do their contracts and convert some of that money into signing bonuses so that it eases up some of their cap hits on the team this season.

But they’ll also be looking to cut their ties with some players or ask them to take significant pay cuts if they want to return. In no particular order here are some Patriots players who may get released in a salary cap scenario.

TE Martellus Bennett: Bennett carries the biggest cap hit of all of the players listed here. After he signed with Green Bay last offseason, he was suffering from a shoulder injury that required surgery and Bennett was at peace with the decision and planned on announcing his retirement.

But the Patriots called and he returned to New England where he performed very well in 2016 and was instrumental in helping the Patriots win Super Bowl LI. But soon after he hurt his hamstring and was placed on IR after just a few weeks with the Pats.

Bennett may take all the guesswork out of the equation and decide to retire. If he does not, then the Patriots can ask him to take a big pay cut or just release him. If he’s released, that will save the team, $6.1 million dollars in the salary cap.

TE Dwayne Allen: Allen came over to the team after Bennett left last year in free agency. Allen was a very good blocker, which has always been his strength but really struggled in the passing game. It wasn’t a lack of effort that slowed him but he was really laboring out there in the passing game.

His struggles were so great that it was the reason the Patriots brought back Bennett late in the year, to begin with. With Gronk healthy last year, that limited his targets but even when the big man was out, he barely registered in the passing game.

Could the team bring him back in 2018? Absolutely. But at $5,000,000? That is really doubtful. This could be a scenario where the team just decides to move in another direction and cut their ties with him. That would be another $5,000,000 in savings.

DT Alan Branch: My, oh my what a difference a year makes. Branch, since coming to New England has played some of the best football of his career. Fresh off of the win in Super Bowl LI, he was given a two-year deal and it was hoped that he’d live out that contract and give the team that immovable object inside that he’s done so well.

But when big men, such as Branch go, their game goes really quickly. Branch started the season slowly, which wasn’t unusual but he never caught on to where he was in the past. When he did play this season, he was often a shell of his former self. Granted he was dinged up for a good part of 2017, but at 33, his best days are probably behind him.

Branch was a healthy scratch for this season’s Super Bowl along with Malcolm Butler, how crazy is that after the big roles each has played. Cutting Branch would save the team $3.55 million, this move is sadly, going to happen.

LB Shea McClellin: I liked what McClellin brought to the table in 2016, he could do a little bit of everything. He could rush the passer, cover in the secondary and act as a middle linebacker and support the run when needed. His versatility was such that they asked to do several things and he did them well.

But he suffered a concussion, a pretty severe one in training camp and was placed on IR at the beginning of the season. The team brought him back midway thru the year and while practicing during his 3-week return window, he suffered a setback and was lost for the year with yet another concussion.

With a lack of pass rushers, the Patriots could opt to let him come back and work his way back into the lineup. But long-term health concerns for the player trump the team’s needs. They should just encourage McClellin to get on with retirement and enjoy life. If they cut McClellin, they’d save. $2.1 million in cap space.

LB David Harris: Harris was released by the Jets and the Patriots scooped him up last year. Harris was the consummate professional and approached every day like he was the starter and worked hard.  But he obviously lost more than a step and couldn’t keep up with the flow of the game any longer.

Harris played very sparingly (180 snaps) for the season while appearing in 10 games. With the lack of depth at linebacker, that had to be crushing for the proud veteran. He only appeared against run-heavy teams on early downs but did show he still brought a pop in the trenches.

But his lack of speed was the reason he too was a healthy scratch for the Super Bowl. If Harris is cut, the savings for the team will count $2.1 million against the salary cap.

RB Mike Gillislee: Gillislee came over from the Buffalo Bills last season and began the season as the Patriots’ lead back. While most look upon his year as a bust, it didn’t have to do with his success as a runner as much as it did his lack of skills in the passing game. Once the team decided to go with Dion Lewis and Rex Burkhead, Gillislee was pushed into being a healthy scratch.

Lewis and Burkhead gave the team the run/pass option whereas Gillislee was basically a threat just to run so the coaches decided on a switch. And the offense was much more difficult to stop. Cutting Gillislee would save the team $2.1 million in salary cap savings.

But both Lewis, Burkhead and backup Brandon Bolden are all free agents. That leaves Gillislee and James White as the only pure running backs on the roster. They could opt to hold onto him for that reason. Or they could cut him and use the saved money to bring back Lewis or Burkhead.

These cap savings would push the Patriots up to the $30,000,000 dollar salary cap cushion, due to the Top 51 players rule in the salary cap. But that scenario is a much better one than say $13.14 million.

And of course, for every player cut, another has to be there to take his place. Two young players who we saw very little a year ago are top draft choice Derek Rivers and UDFA Harvey Langi. It will be interesting to see if they can carve out a role for themselves this year in camp. We’ll have more on them and others in the upcoming weeks.