5 years ago at 10:06 am ET
Follow @bob_george
Posted Under: Patriots Commentary 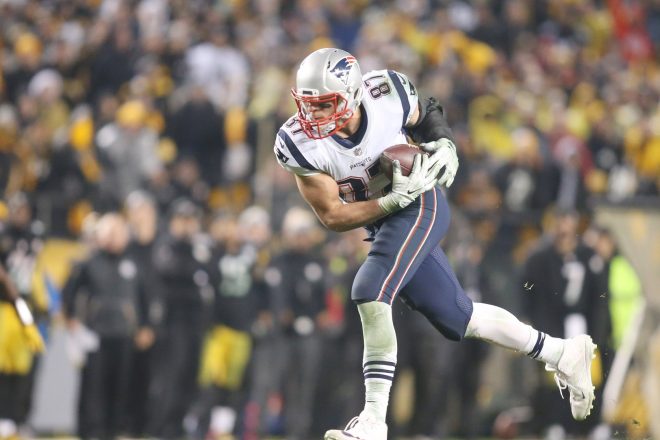 MINNEAPOLIS – This is the Twin Cities, where it’s about things that come in twos.

Two cities, Minneapolis and St. Paul. It’s the second Super Bowl in this area, and the second stadium (Super Bowl XXVI was in the old Metrodome). The Twins are one of two cities that train in Fort Myers, Florida, the other team being your Red Sox.

The Eagles matched the Patriots in the regular season with a 13-3 record. However, their season, where many observers thought they were hands down the best team in the NFL, seemed to take a fatal hit when starting quarterback Carson Wentz was felled by a knee injury against the Los Angeles Rams on December 10. But backup quarterback Nick Foles has kept their ship afloat, and despite being a home underdog in two straight NFC playoff games, Foles has guided the Eagles to within a game of an NFL championship, which has eluded the Eagles since their last win in 1960.

In both of their playoff wins, the Eagle defense carried the day, holding high powered offenses like Atlanta and Minnesota to 10 and 7 points respectively. Foles and the Eagle offense did drop 38 points on Minnesota, but that Vikings team was coming off a crazy last second win against New Orleans which seemed to sap the emotion and energy off of them. It might not be indicative of the true ability of the Eagle offense, but it did give the Patriot coaches a lot to consider in formulating the game plan for Sunday.

The Patriots opened at 5 ½ – point favorites, but the line has since dropped to 4. Word is that a lot of early Philadelphia money coming in turned the line downward, and that the line going back up could happen with late money coming in on the Patriots. The Eagles do present a tough matchup for the Patriots, and a lot of people see similarities in the Eagles and the Patriots’ last opponent, the Jaguars, whom the Patriots beat by 4 points to gain entry into this Super Bowl.

If the Patriots are to win on Sunday, there are a few slam dunk matchup advantages that the Patriots absolutely must win. It may still follow the pattern of past Super Bowls: no scoring in the first quarter, falling behind by double digits, then rallying late to win, helped in part by waiting for the opponent to make a fatal mistake. But if the Patriots are to hoist their sixth Vince Lombardi Trophy, here are the keys to victory.

Gronkowski was officially taken off concussion protocol on Thursday, but that seemed like a fait accompli. If Gronk is 100%, or even close to it, and the Patriot offense is able to free him up on his trademark seam and slant routes, Gronk should win this matchup quite easily. In the only Super Bowl

Gronkowski played in where he was completely healthy, Seattle rotated coverage on him between Earl Thomas, Kam Chancellor and various linebackers. Gronk finished Super Bowl XLIX with six catches for 68 yards and a touchdown. If a healthy Gronk can match up with these guys, Jenkins should not win this battle. Gronkowski will likely see double teams often, but if that can free up other receivers in the process, the Patriots will take that, too.

A Globe article on Friday talked about how well teams coached by Bill Belichick have done recently against defenses coached by Schwartz. The Eagle defensive coordinator, who was formerly with Belichick in Cleveland (he is affectionately known as a “slappie”), did some time as head coach of the Detroit Lions and lasted five seasons, finishing with one playoff berth (a loss in the Wild Card round against New Orleans) and four losing seasons. McDaniels, who will likely be coaching his final game in New England, will get a lot of insight from Belichick how to approach Schwartz, but it is incumbent upon McDaniels to be on top of his game and take advantage of the familiarity between Belichick and his former assistant.

If Gilmore continues to draw the top opponent wideout, he will get this guy. Jeffery popped off on cyberspace on Friday, guaranteeing an Eagle win, christening himself as the Freddie Mitchell of 2018. Jeffery is a ton more talented than Mitchell, but Gilmore has shown recently that he has lived up to his billing once Belichick granted him his wish to concentrate on only one receiver. With two weeks to study Jeffery, Gilmore can cement his Patriot legacy, albeit still a work in progress after only one season, with a shutdown job on Jeffery. If Foles can get the time to throw, Gilmore cannot allow himself to be beaten deep, and Jeffery is as good deep threat as anyone in the league.

Twice, Brady has lost Super Bowls to Eli Manning. In his five Super Bowl wins, he has beaten Kurt Warner, Jake Delhomme, Donovan McNabb, Russell Wilson and Matt Ryan. Foles isn’t even in Manning’s class, let alone the other five. But if Foles has a game like, for example, Peyton Manning two years ago where he does literally nothing and the rest of his team delivers victory (a defensive player, Von Miller, was the MVP of Super Bowl 50 for Denver), that could spell trouble for the Patriots.

Brady has put his reputation on the line with his Facebook presentation, Tom vs Time. He will need to follow through on that and then some in this game. Brady likely won’t get away with a pick-six like he did last year, and he threw two picks against Seattle three years ago. Scoring, or lack thereof, in the first quarter has been a source of jokes for Patriot haters, but the bottom line is that Brady has to show more than ever that a 40-year-old can play this game better than anyone in the world.

What Patriot Nation needs to see is Brady playing a completely terrific game, not needing an insane fourth quarter rally. Get an early lead and dictate the game to Philadelphia, not the other way around. Foles isn’t likely to drop 38 points on the Patriots like he did against Minnesota. Brady probably won’t drop 38 on the Eagles, either. But he has to emerge as the superior quarterback, as most experts believe he will.

There are some areas where the Eagles are formidable. The defensive line of the Eagles will give the Patriot offensive line problems. The Eagles have three decent running backs in Corey Clement, Jay Ajayi and old friend LeGarrette Blount. Zack Ertz is no Gronk, but he is very good.

The only coach to beat Belichick in a Super Bowl is Tom Coughlin. The Eagles do have a good defense which can give Brady problems, but Pederson isn’t likely to take advantage of this like Coughlin did. If Belichick does what he does, and Pederson doesn’t suddenly wake up and discover he’s Coughlin, advantage Patriots.

It should be a good, close game. The Eagles have had a terrific season, even without Wentz at the finish line. But the Patriots have too much experience and key personnel to carry the evening. If the Patriots “do their job”, and do their job “well”, Number Six should follow.

READ NEXT:
PHOTOS: The Brady Family Is Ready For Super Bowl
Posted Under: Patriots Commentary