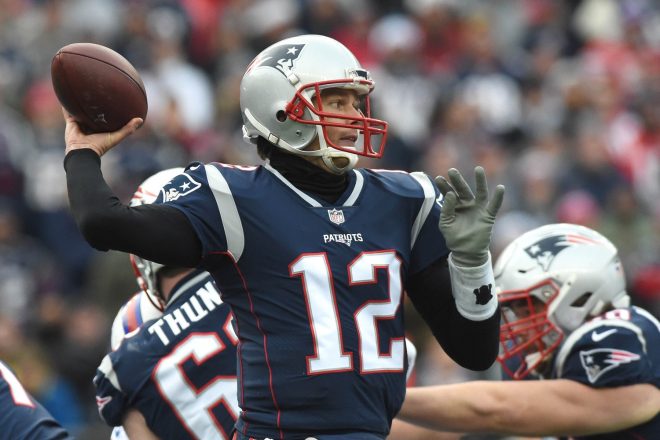 FOXBOROUGH – It may turn out that the best thing to happen to the Patriots happened not at Gillette Stadium on Sunday, but rather down in M&T Bank Stadium in Baltimore.

Long after the Patriots had safely tucked away the top AFC playoff seed for the seventh time in team history, thanks to a 26-6 win over the Jets, several teams battled to decide the fifth and sixth playoff seedings. Baltimore and Tennessee controlled their own destinies, with the Chargers and Buffalo needing to win and get help.

Three of these teams did win. The Chargers won at home against Oakland, 30-10, after which the Raiders fired their head coach, Jack Del Rio. The Chargers then needed Tennessee to lose to Jacksonville, whose playoff seed has been set at three. But Tennessee held on to beat the Jaguars, 15-10, eliminating Los Angeles from the playoffs and sending the Titans to the postseason as at least the six seed.

Next on the hot seat was Buffalo, needing to win at Miami to keep their season alive. It got crazy at the end, but Buffalo held on and defeated the Dolphins 22-16. Everything then came down to the Baltimore-Cincinnati game, which the Bengals led early but the Ravens rallied late to take a 27-24 lead with 3:17 left in the game.

After an exchange of punts, Cincinnati got the ball back with 2:43 left. Aided by some key defensive penalties, Andy Dalton led the Bengals to the Baltimore 49-yard line. With 44 seconds left and facing fourth down and 12, Dalton was able to find Tyler Boyd in the right seam for an improbable 49-yard touchdown pass. Cincinnati was able to hold off Baltimore on downs, and the Bengals had a 31-27 win.

Buffalo thus makes the playoffs for the first time since 1999, ending the longest current playoff drought in the NFL. They will travel to Jacksonville next week to play their first playoff game since the epic Music City Miracle loss to Tennessee in January of 2000. Tennessee unexpectedly jumped up to the five seed and will travel to Arrowhead Stadium next weekend to play the Kansas City Chiefs. The Patriots will then play the lowest seeded winner in two weeks at Gillette Stadium, most likely on Saturday night if Bob Kraft gets his way.

This may turn out to be a nice scenario for the Patriots. The only team among next weekend’s four teams that cannot come to Foxborough for the Divisional round is Jacksonville, who will play at Pittsburgh if they win next week. The Patriots also no longer need to worry about Baltimore, who is 2-2 at Gillette Stadium all-time against the Patriots in the postseason and will never fear the Patriots.

Tennessee and Buffalo are at opposite ends of the familiarity spectrum. Should Buffalo win next weekend, they would come to Foxborough for the second time in four weeks and face the Patriots for the third time this year. On the other hand, the Patriots play the Titans only every three years, and have not met since 2015. The Patriots have won the last six meetings versus the Titans, including a 2003 playoff win on a frigid Saturday night at Gillette Stadium.

Memories of that game came back on Sunday, as kickoff game time temperature was around 8 degrees Fahrenheit. The Jets played well for the entire game and never got into “get on the bus” mode against the 16-point favorite Patriots. But cold weather was a factor for the game, as both teams, especially the Patriots, played cautiously and seemed bent on not getting anyone hurt versus playing beautiful football. The Patriots did not sustain any serious injuries, and managed to beat the outmanned Jets by 20 points despite not bringing their “A” game to the table.

Tom Brady played an average game (his passer rating was only 82 but did not throw an interception for the first time in five games), and relied on Dion Lewis to carry the load for the game. Lewis finished with 93 yards rushing and 40 yards receiving, scored two touchdowns, one rushing and one receiving, and cemented his status as one of Brady’s “go-to” guys as they head into the postseason. This is the third straight game Lewis has scored both a receiving and a rushing touchdown in a game, a feat which had not been accomplished by a Patriot since Larry Garron in 1964.

The game was close in the second quarter, but seemed to turn when Chandler Catanzaro (who missed a walkoff field goal last year as an Arizona Cardinal) yanked a 40-yard field goal wide left to keep the score 7-3 Patriots. The hometowners would score two late first half touchdowns, passes to Brandin Cooks and Lewis, to take a 21-3 lead at the half. The rest of the game was simply about holding on to the lead and not getting hurt.

Another telling stat which might suggest the attitude of the Patriots is the stat line for Rob Gronkowski: zero yards, zero catches, zero targets. Gronk was on the bench wearing a parka for most of the fourth quarter. The Patriots didn’t need the big fella at all, so instead of risking injury, he just hung in there and blocked all game long.

The “hero” of the game for the Patriots, if there was one, was new linebacker James Harrison. Signed as a free agent this week after Pittsburgh unceremoniously dumped him, Harrison had 4 tackles and two sacks, both sacks coming on the last two plays of the game. The Patriots used Harrison as an edge setter for most of the game, and Harrison showed that he can help this team in the postseason despite his age (39).

But the Patriots had nothing to worry about. In the fourth quarter, trailing 24-3 and facing fourth down and 9 at the Patriot 17, Todd Bowles had Catanzaro kick a 35-yard field goal instead of going for it. CBS analyst Tony Romo said, “Going for the field goal tells me that the Jets don’t want to win this game.” The game, despite having home field on the line, was absent of any anxiety or drama. In Pittsburgh for their season finale against Cleveland, Mike Tomlin had such little faith in a Jet upset that he made Ben Roethlisberger and Le’Veon Bell inactive for the game.

Bill Belichick won his 250th regular season game, tying him for third place all-time with former Dallas coach Tom Landry. The Patriots have now won 13 or more games six times in team history, and have been the top playoff seed in the AFC in three of the last four seasons. Only once in team history did the Patriots get the one seed and not make it to the Super Bowl, when they suffered a loss to the Jets in 2010 in a home Divisional game.

That is, after he and all the Patriots pop champagne corks at midnight and toast in 2018, and hopefully another happy first five weeks of the year. Like how 2017 began, for example.