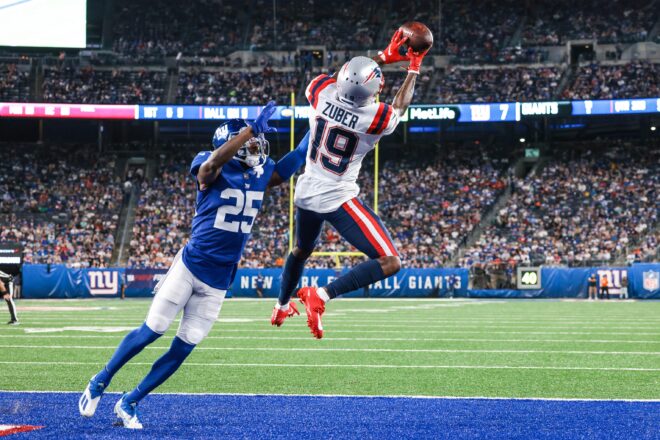 The New England Patriots wrapped up their 2021 preseason schedule with a trip to New Jersey to take on the New York Giants.

While numerous starters were ruled out for the game, the finale remained one final opportunity for bubble players to make their cases to Bill Belichick and the coaching staff before the final roster cuts began on Monday.

Take a look at how the game unfolded through the best social media sights and sounds shared across social media from both the players and various media outlets.

In the first quarter, the Patriots defense dominated the Giants offensive line, creating pressure from all angles on quarterback Daniel Jones.

JOSH UCHE! The 2nd year LB follows up his strong week of practice with a sack on the first drive! pic.twitter.com/fvPg6ZyhJW

A 41 yard field goal by Nick Folk gave the Patriots the early 3-0 lead.

On the offensive side of the ball, Cam Newton struggled during his first quarter of reps, finishing his day 2 of 5 for 10 yards and an interception.

During the second quarter, it appeared the Giants were finally going to get on the scoreboard, but D’Angelo Ross had other ideas.

WHAT A STOP! The Patriots not only stopped the run on the half yard line on 2nd down, but get a D'Angelo Ross interception on 3rd and goal! pic.twitter.com/CCxqTMOsOu

Quarterback Mac Jones would take over for Cam Newton in the second quarter.

A Quinn Nordin 48 yard field goal extended the Patriots lead to 6-0, but just before halftime Kaden Smith found the end zone following a 23 yard pass from Daniel Jones to give the Giants a 7-6 lead heading into halftime.

That’s what I’m talking about!!! https://t.co/LkNRNI0ZNR

JJ Taylor is a playmaker.

As the second half began, the Patriots running game continued to shine as they had all summer and helped setup a Mac Jones touchdown to Isaiah Zuber to give New England the lead back at 12-7.

Patriot running game… Great depth at RB, OL is a potential top 5 unit, and the QB is a beast running the rock. Buckle up.

It was incomplete, but this was a beautiful pass by Mac Jones as well! He's been throwing some DIMES this preseason! Love it. #Patriots https://t.co/xXzq2eNzNL pic.twitter.com/iMFDHZTc38

Midway through the third, who else but Rhamondre Stevenson?

.@dreeday32 would not be denied.

When RB Rhamondre Stevenson smells the goal-line, he is not to be denied. His 5th rushing TD of the preseason.

During the fourth quarter, Giants quarterback Mike Glennon recorded two touchdown passes but the Patriots held on for a 22-20 victory to end the preseason 3-0.

"Every week is a step forward."

Patriots players on the final game of the preseason. pic.twitter.com/HfBQSg8XAJ

I gotta be the first athlete to win a football game and @FamilyFeud on the same night. pic.twitter.com/oiCRGFXR1v