The Patriots are still playing in their Hat and T-Shirt game for the AFC East Crown. Any scenario of a Bills loss/tie or a Patriots win/tie guarantees them the AFC East crown for the ninth year in a row. We know that they set their sights much higher, but it all begins with winning the division. So, we’ll be watching the scores of the Buffalo, Miami game before the Pats game in Pittsburgh this afternoon.

Late Thoughts on the Passing of Former Patriots Coach Ron Meyer:
This was originally supposed to be in last week’s News and Notes and thru a miscue on our part was inadvertently cut out. But Ron Meyer was an important member of the Patriots history for a couple of reasons. The two-time NFL Coach of the Year came to New England in 1982 from SMU and transformed the team from a 2-14 doormat to a 5-4 playoff team during the strike-shortened 1982 season.

But in his 1982 season, Meyer was on the sideline during one of New England’s most iconic and unforgettable moments. During a December game against the Dolphins in the old Foxboro stadium, a snowstorm had blanketed the field where neither team was able to move the ball. The Patriots drove late in the game and were poised to try a field goal.

Mark Henderson a prisoner from Walpole on work release drove a snow plow onto the field and cleaned a spot for kicker John Smith to try the field goal with a clean piece of real estate. Dolphins coach Don Shula had a cow over it. Smith made the field goal 3-0 and that play became part of the Patriots lore. The John Deere tractor now hangs in the Patriots team Hall of Fame. Condolences to the family of Ron Meyer, RIP.

Tom Brady Gets Big-Time Kudos from Steelers Villanueva:
Tom Brady was getting some rare kudos in the Pittsburgh media this week. Steelers left tackle Alejandro Villanueva spoke about what Brady does behind the scenes, unpublicized to help U.S. soldiers deployed overseas and will at times video teleconference with soldiers to help them thru the tough times and offer encouragement.

Villanueva said in the Pittsburgh Post Gazette that he was a Patriots fan and would check the scores while overseas to see how Brady, Gronk, and Julian Edelman were doing in certain games.

Nice to see that Brady and any NFL players doing that for the troops and as Villanueva’s comments show, it doesn’t go unappreciated by the men and women overseas who are protecting our right to watch games safely in our homes on Sunday.

Rob Gronkowski Admits Mistake, Focusing on Steelers:
The Patriots Rob Gronkowski is back from his one-game suspension for his late hit on Buffalo Bill Tre’Davious White two weeks ago. While Gronkowski freely admitted his “mistake” he made it clear, that his focus this week is firmly on the Steelers.

Taking a page out of the Belichick handbook, Gronk said a couple of times when asked about the Buffalo incident, “my focus this week is on the Steelers.” Finally calling the interview off and abruptly walking off with a “thank you guys” and was gone.

Gronkowski will have to eventually speak about this incident, but (with the coaches’ prompting I’m sure) stuck to the company line about the Steelers game.

Britt Can Bring a Valuable Red Zone Presence to the Patriots Offense:
We’re not even sure that Kenny Britt, picked up off of waivers this week from the Cleveland Browns will suit up this week, and even if he does, his understanding of the Patriots offense after just a couple of days would lend itself to being a very few plays or packages but his addition, at this late hour is an interesting development.

Britt is a guy who the Patriots coveted during free agency but once the Browns threw that kind of money at him, bowed out. Now after being released by the same Browns, he comes to New England fairly cheaply and they’ll get to see if he can produce in the last few games of this year and next.

What’s intriguing about Britt is his size. Britt is 6’3, 225, so that automatically makes him the biggest Patriots wide receiver on the roster. Chris Hogan is 6’1, Brandin Cooks, Danny Amendola and Phillip Dorsett are all 5’10. Britt can take some of the heat off of Rob Gronkowski when the Patriots get into the red zone. With some stability in the regime here, it can’t do anything with help Britt as he’s worked with a slew (seven) of offensive coordinators in his nine years. Josh McDaniels will now be #8. If he can digest at least a part of the playbook down the stretch, he could pay dividends when the team gets down in the red area.

Forget about this lost season in Cleveland, remember it was just a year ago Britt caught 68 passes for 1002 yards for the Rams. He can play, now the question is, can he learn the offense in time to be helpful this year?

The Buffalo Bills are used to playing in cold, wintry, weather conditions. The lake-effect snow storms coming off of Lake Erie are a matter the locals have to deal with including the Bills. But last week’s game against the Colts was a storm worth mentioning even for the battle-tested fans of the Bills. 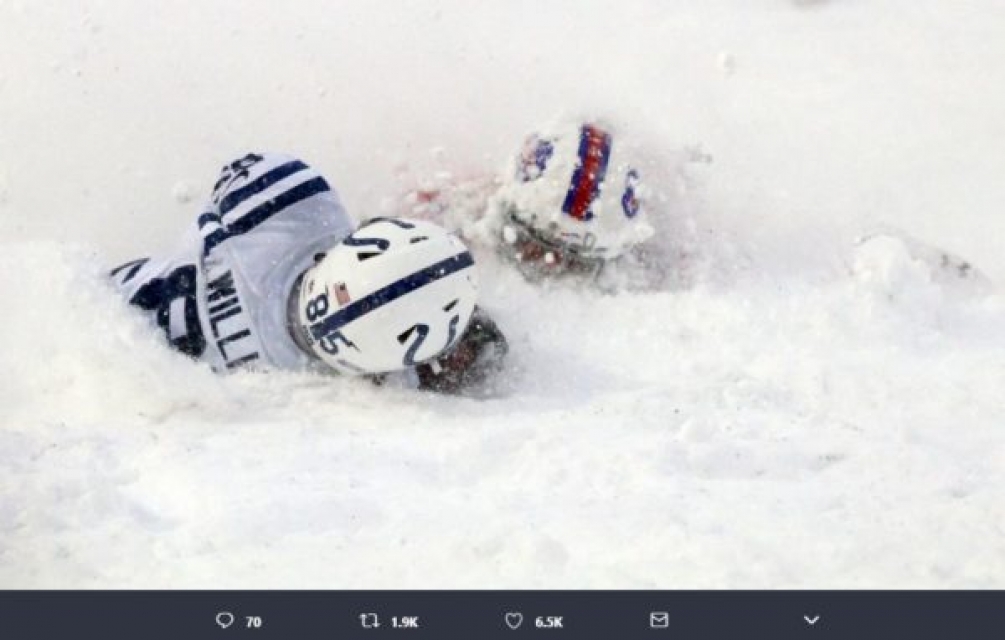 Bills and Colts were almost swallowed up by the snow. (Buffalo Bills Twitter photo)

It was a test of wills and the Bills won out, courtesy of a LeSean McCoy 21-yard touchdown run in overtime to take home the victory 13-7. The Bills had earlier decided to go with their color rush all red uniforms which forced the Colts to go all white, which in the near white-out conditions, made the Indy players pretty well camouflaged. It had to have been a tough game to see much if you were a fan sitting any other than in the lowest tier of seats but many of the fans braved the elements until the very end….that is dedication.

Dolphins Face Buffalo Twice in the Last 3 Weeks of 2017:

The Miami Dolphins looked dead and buried a couple of weeks ago but two straight wins against the Broncos and the Patriots on Monday have infused the roster with confidence going down the stretch. The playoffs, while still a long-shot is still a possibility and to do so, the Dolphins will have to beat the Bills and they’ll face them this week and again in two weeks in Miami.

It is probably imperative for each team to sweep the series this season as a split would probably hurt both teams.more than help them in any way. So today’s game in Buffalo now becomes a must-win for both teams.

The Dolphins, who did a great job of getting after Tom Brady last week will be facing Tyrod Taylor after Nathan Peterman who started for the second time this year last week, suffered a concussion and is out this week. Taylor hasn’t been much on throwing down the field this year so that will be an area to watch. Miami will also try to get Kenyan Drake heavily involved again to set up the passing game.

With the loser pretty much eliminated this week, this is a playoff matchup for both teams.

Muhammad Wilkerson “Just Doesn’t Get It” Jets To Leave Him Home:

The New York Jets very talented but selfish and self-centered defensive lineman Muhammad Wilkerson may have finally “unworked” his way off the Jets. The normal phrase would be “worked his way” off, but that doesn’t fit the big man’s history..

He’s made a habit out of being late and his latest no-show on Friday has forced Todd Bowles to step in and deal with his antics again and probably for the last time in New York. Jets coach Todd Bowles has disciplined Wilkerson four times in his three years of tenure. Saddled with a team many picked to go winless (hello Cleveland), Bowles has had his team playing decent football all season and have been in the majority of their games going 5-8. Is it too much to ask a player making $18,000,000 to show up on time and be part of the team? Apparently so. Wilkerson’s $16.75 million for 2018 doesn’t become guaranteed until the third day of the league year in March. It won’t. Wilkerson had a great deal and put himself before the team. He’s likely to find, that while teams may kick the tires on him, no one is ponying up that kind of cash for a man with no work ethic.