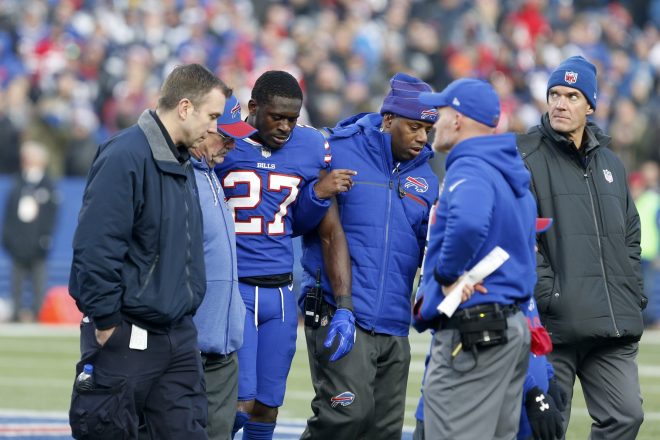 Rob Gronkowski’s fourth-quarter hit on Tre’Davious White may have put himself in harms way with the NFL in terms of a suspension, but that may not be the only thing Gronkowski has to worry about before this season is over.

Standing in his way is a rematch against the Bills in three weeks when the Bills visit Gillette Stadium on Christmas Eve and if he’s fortunate enough to be able to play, the veteran tight end may find himself a target for a defense that will be looking for a little redemption on behalf of one of their own.

After the game, there was apparently already talk in the Buffalo locker room about the fact they’re not pleased with what Gronk did after the tight end struck the Bills’ cornerback in the back of the head following his fourth quarter interception.  While Gronkowski apologized after the game and said his actions stemmed from “frustration” over the way White was covering him, along with the fact the officials weren’t calling interference, the guys in the Buffalo locker room didn’t want to hear it.

When asked about whether or not there would be any carryover from this, Poyer told Hannable, “Of course.  Yeah.  For sure.  Yes.”

That may not bode well for a player who has already suffered either season-ending injuries or injuries that severely hampered him thanks to low hits from defenders over the course of his career.  While a cheap shot may not necessarily be coming from anyone on the Buffalo defense, it could just mean that they won’t hold back if it means hitting him low in an effort to bring him down.

Needless to say, should Gronkowski be suspended this week, he may also have to worry about having injury added to insult if the Bills ultimately decide to follow through with their threat.