5 years ago at 9:42 am ET
Follow @SteveB7SFG
Posted Under: Patriots News 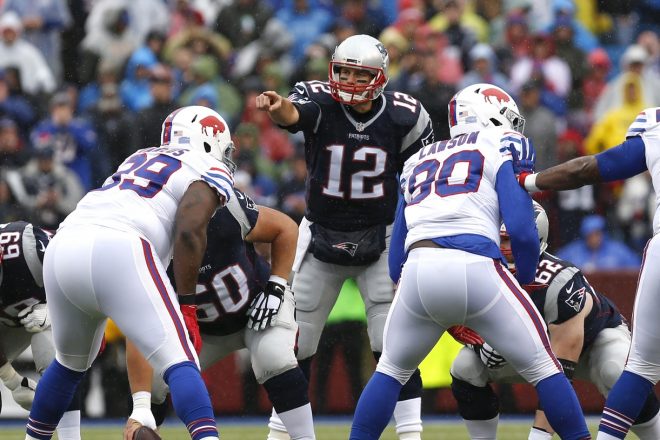 The Patriots and Buffalo Bills will meet for the first time in 2017 on Sunday in Buffalo as the schedule makers don’t have the division rivals face each other until December. The rivalry has gone back and forth but the Bills have had a nightmarish record against the Patriots in the Bill Belichick era.

The Patriots won 15 in a row at one point and Tom Brady has held mastery over Buffalo. Brady is 28-3 overall against the Bills but one loss was the season finale in 2014 where the Pats rested many of their starters and Brady played in the first half. But 2017 is a new year and this Buffalo team is still in the playoff hunt as the season enters Week 13. If the Bills are going to end their own 17-year playoff drought, they’ll have to start taking some of these matchups with New England.

A sweep by the Patriots this year would doom any post-season hopes the Bills have. The teams split last year but the Week 4 win in Foxboro last season was against the Patriots #3 QB Jacoby Brissett while Brady was serving his Deflategate suspension and Jimmy Garoppolo was hurt. So, the normally raucous crowd will be even louder this week, since the Bills actually have something to play for this week and it will have the crowd and the team fired up.

Here are some things that we’ve identified this week as things to keep an eye on:

Defense Regains its Swagger…. “We’re Back”: The Bills defense had been gashed and gashed badly during the three-game losing streak. In the three blowout losses to the Jets, Saints, and Chargers, the Buffalo defense gave up 638 yards rushing. In all of their other games, they allowed just 616 yards on the ground. Last week, they righted the ship and stuffed the Kansas City running game to the tune of just 57 yards on the ground and 236 yards overall in the 16-10 win in Kansas City.

This led linebacker Matt Milano to reflect on the re-emergence of the defense stating “It got lost,” l Milano said of the defensive swagger, “but it’s back. We’re back.”

The Bills have a young and talented secondary, they’ve gotten very good play from safety Micah Hyde. In the Bills victories earlier in the year, they were generating a ton of turnovers and that’s what they’ll need this week to slow the New England offense and keep up with them scoring wise. Much will have to come from the Bills pass rush which has just 17 sacks on the season. They’ll have to bring pressure on Brady if they’re going to win this one at home.

The Offense Still Goes Thru Shady McCoy: McCoy is averaging a very unMcCoy-like 3.9 yards per carry this season. And he had a rough day against the Chiefs defense running for just 49 yards on 22 carries. He leads the team with 758 yards rushing on the season, with four touchdowns, still good for eighth in the league. So, he’ll be amped up for this one in front of the home crowd, especially with things to play for.

McCoy leads the team in receptions with 46 as well, far ahead of the next most productive receiver in Charles Clay with 29. So the Patriots focus will be on slowing down McCoy this week. The Patriots run defense hasn’t been great and since Buffalo isn’t a dynamic passing team, they’ll be looking to run the ball with McCoy and Tyrod Taylor scrambling, which will set up their play-action passes and bootlegs to the perimeter of the defense.

It is possible that McCoy, who is playing in his ninth NFL season is starting to show some wear on the treads. But the Patriots won’t be looking at him this way and their defense will put him down as the #1 target to slow down. He’s nearly 33 percent of the Bills offense. Buffalo needs a big game from McCoy this week to pull off the upset.

Taylor Has To Step Up His Game…Now: Most people don’t believe that the Bills will carry quarterback Tyrod Taylor into the 2018 season. The Bills are figuring him to be gone by then. The fact that they went with rookie Nathan Peterman two weeks ago kind of confirmed that they are looking to upgrade. Taylor can throw a monkey wrench into their plans by giving them a good reason to hold on to him. He can win out, and bring the Bills a playoff berth, something they haven’t done in 17 years. But he’s going to have to step up and be able to put the team on his back, something he hasn’t been able to do in his three seasons at the helm.

A look at his stat sheet would put Taylor in the upper half of the NFL’s QB hierarchy. I’d dispute that. Taylor has a good completion percentage and very rarely turns the ball over. They like to roll him out where he can make the safe passes that are right in front of him. And he has the option to run, where he can make plays with his legs. When the Bills running game with McCoy is thriving, he puts up nice numbers. But he’s never been able to show the ability to put the team on his back and win games when the running game has slowed. He plays it safe, checks down too often and is too frequently completing passes short of the sticks on third down. This week and the game in New England later in December, Taylor can help himself out by putting the team on his back. Throwing for an average of 182.5 yards per game and 20 points won’t win many games against New England. The Bills have been outscored in every quarter but the fourth this season…that will have to change and it starts with Taylor.