5 years ago at 10:35 am ET
Follow @IanLogue
Posted Under: Uncategorized 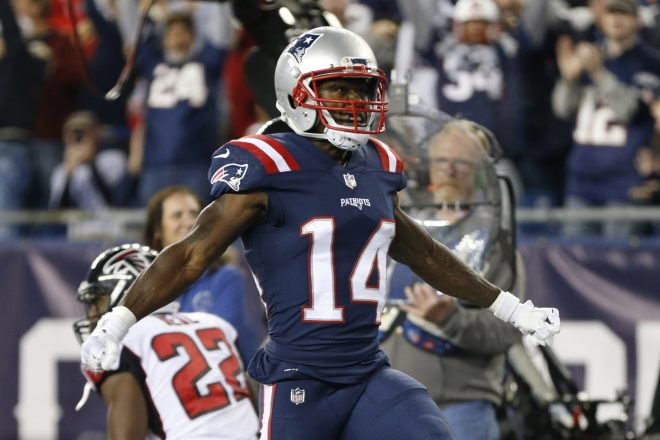 The Patriots have very few flaws offensively, but looking over the numbers after Sunday’s win over Oakland, there’s one number that stands out on the stat sheet that is a little surprising.

Tom Brady finished the afternoon 4-of-8 on third down, with his 50% completion percentage on third down being his lowest since their week one loss to the Chiefs.  Given how easily they took care of the Raiders, that fact was a little odd, but that total ties into an overall season total that may surprise some people.

Brady’s third down success on Sunday included the usual suspects, with Brady connecting on 3-of-4 attempts to Danny Amendola with 3 first downs, along with 1-of-1 to Rob Gronkowski.  He missed one attempt to James White, while wide receiver Brandin Cooks finished 0-of-2 on third down.

The latter number is the one that stands out, and it’s been an issue between Brady and Cooks all season.  Overall, Brady is just 4-of-16 when targeting the speedy receiver on third down, far and away the lowest success rate among all the receivers he’s targeted this season with 10 or more attempts.

2017 Third Down Receiving Totals Through Week 11

Looking back, Brady was just 1-9 targeting him on 3rd down over the first five games and over the past five, he’s a mere 3-of-10.

It’s bizarre, and it’s obvious that the two have had trouble getting on the same page when they’ve needed to in order to move the chains.

Except of course, for one situation.

Put these two in 3rd-and-over-10 yards, and their percentage goes up quite a bit. In fact, Brady’s hit him on 2-of-3 attempts, averaging 31.5 yards.

The good news?  All this means is that there’s still plenty of room for improvement between the two, who aside from this problem, have already had some big moments. Cooks has caught 6 of the team’s longest 10 plays of 2017 and they hit a couple more huge ones on Sunday. One of those plays saw them connect on a 64-yard touchdown that blew the game open on just the third play of the third quarter.

Thankfully, they just keep slowly getting a little better.  Now if they can figure out this one aspect that they’re struggling with, it’s only going to make this offense even more dangerous.

And with six games still left to play, there’s certainly more than enough time to get it right and if Cooks gets his wish, he’ll be around for a while to work on it.

“The goal is to play the rest of my career here,” Cooks told CBSSports.com. “That’s God willing. I don’t know what the future holds, but this is a special place.”

READ NEXT:
Patriots – Miami, Despite Dropping Four in a Row, Dolphins Still in the Hunt
Posted Under: Uncategorized