4 years ago at 8:40 am ET
Follow @SteveB7SFG
Posted Under: Patriots Commentary 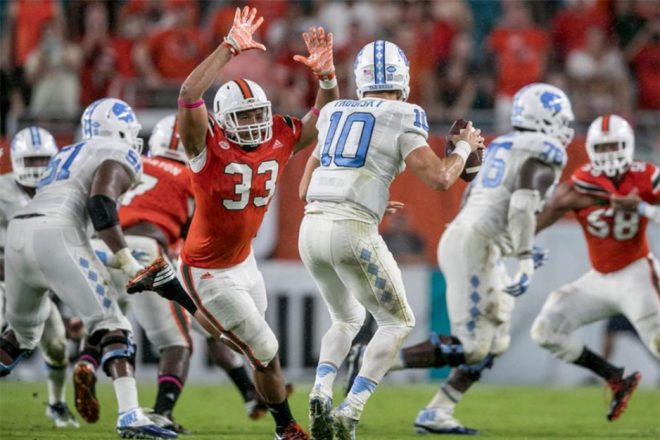 Raise your hand if you’ve heard this before. This guy is too small, too slow, is easily blocked in the running game too often and has little chance to make the team. Except that all he does is make plays and keeps showing up on the highlight reel tape.

“That guy”, in this case, is former Miami Hurricane DE Trent Harris, a UDFA defensive end who wasn’t invited to the 2018 NFL Combine and went undrafted in last month’s 2018 NFL Draft, despite leading the Canes in sacks in 2017.

Standing at 6’2, 250 pounds, Harris doesn’t have the length that the Patriots and most teams are looking for and he’s light, especially in a Patriots system that requires the defensive end to set the edge first and then rush the passer.

But despite those limitations, he’s been amazingly adept at rushing the passer. At the “U” his teammates nicknamed him “Toolbox Trent” because he had a vast array of moves and used his smarts and football savvy to beat defenders rather than just raw speed and athleticism.

He was also versatile for Miami. During one possession sequence, he lined up as a defensive end, middle linebacker (Mike), and a strong-side linebacker (SAM). Those are the kind of small things that will get you noticed and may keep you around during the dog days of training camp. He has played all three linebacker positions as well as a rush end. Plus he’d immediately play on Special Teams.

Often you’ll the term, “his tape doesn’t measure his timed speed.” Which means although a player may run well in the 40-yard dash but his playing speed is much slower. For Harris, the opposite may well be true. He ran a slow 5.02 time in the 40 at his Pro Day. But watching his tape, while he’s not a burner by any stretch, he’s quick off the ball and relentless. He uses his hands well and has a nice closing burst.

His former defensive line coach at Miami Craig Kuligowski, now with Alabama, told the media back before the draft that Harris will play in the NFL.

“He’s got special pass-rushing skills,” Kuligowski said. “He’s a guy that can play on every special teams. He’s very smart. If Trent gets drafted late, he’ll be a steal.”

How the Patriots envision Harris will be interesting to see. He could be sub-package defensive end who gets after the quarterback or they could envision him as a linebacker that is able to blitz off the edge or up the interior gaps.

The patriotic Harris (already a perfect fit) honored his brother by saluting every time he sacked an opposing QB. His brother is a paratrooper in the Army’s 82nd Airborne Division at Ft. Bragg, NC.

Harris is a longshot to make the roster right now, but as we’ve seen before, UDFAs have a way of getting a chance to show what they’ve got with the Patriots. Every year at least one seems to make the roster and many provide significant snaps. Will Harris be that guy? Time will tell.

For the kid who is too small, and too slow, this may be the perfect place to get noticed. All he does is make plays. We’ll be watching him this spring and summer and watch him empty the “toolbox” in an attempt to make the roster.