5 years ago at 8:55 am ET
Follow @SteveB7SFG
Posted Under: Patriots Commentary 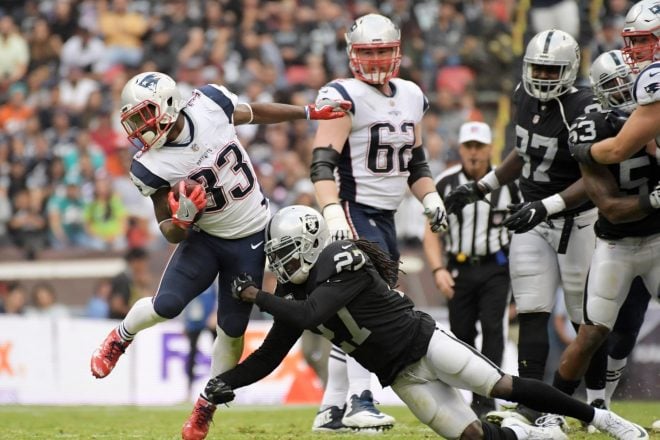 The Patriots put a definitive stamp on their two-game road trip with a second blowout win, dismantling the Oakland Raiders from start to finish in a 33-8 that was far more one-sided than the score would indicate.

The Patriots looked like the team coming off the bye instead of Oakland. They dominated in all phases of the game and the Raiders didn’t seem prepared at all. Not for New England’s offense, the elements at altitude and coping with a big game.

The win puts the Patriots at 8-2 with a three-game lead in the AFC East with Buffalo’s third blowout loss in a row and keeps them tied with Pittsburgh for home-field advantage in the AFC. The two teams will meet on December 17 in Pittsburgh, possibly for the first of two meetings in 2017.

The GOAT was masterful on Sunday. He was in control from the start and he and the coaches had a plan to pressure the shaky and thin Oakland secondary. Brady started off with a very sharp 12-12 performance in the first quarter and never looked back.

Brady’s first touchdown to Dion Lewis was classic Brady. He looked left and the safeties naturally drifted that way. Then he pump faked which froze the defenders and quickly turned right, where he was going all along and Lewis had gotten a step on linebacker Cory James and the eel-like RB split two Raiders before diving into the end zone.

Brady hit two deep bombs (diminishing arm strength?) to Brandin Cooks for 51 yards and a 64-yard touchdown to start the second half. But it was his poise in the situational drill at the end of the first half that separates the men from the boys.

Oakland fumbled at the Patriots seven-yard line with 33 seconds to go. Brady moved the Patriots brilliantly to the Oakland 45 where Stephen Gostkowski booted a 62-yard FG as time expired. Outstanding situational football. Three plays into the third quarter Brady hits Cooks streaking down the field for a score. Game over, thanks for coming, enjoy your flight home…don’t drink the tap water.

Dion Lewis has the hot hand and the Patriots are letting him run with it. Lewis had the first touchdown where he made an incredible cut and seems at times to be absolutely unstoppable with the moves he puts on people in the open field. That score reminded one of the Dallas game a few years ago. Lewis also averaged six yards a carry in the running game, definitely an afterthought this week, still looked pretty good running between the tackles.

Rex Burkhead had a fumble and a drop although the pass from Brady wasn’t one of his better throws on the day. James White was barely used but the Patriots are letting Lewis ride his hot streak. Nothing to worry about there. James Develin had some solid blocks inside in the running game as he does every week.

Brandin Cooks has a history of big games against the Raiders and Sunday he didn’t disappoint. Cooks had six catches for 149 yards with a 64-yard touchdown where he just blew by the coverage and the safety help over the top was late. On his 51-yarder he blew by double coverage to haul in Brady’s pass. After that, he was getting a large cushion underneath and that is an area that the Patriots will look to exploit in the future.

Danny Amendola was his usual money in the short to intermediate passing game. He was targeted nine times and caught eight including a nice touchdown running along the back of the end zone. Brady bought time by sliding in the pocket and Amendola broke free and made a nice catch, getting both feet down before being pushed out of bounds.

Rob Gronkowski, Dwayne Allen, and Martellus Bennett had a very solid day catching all eight throws to them for 75 yards. Gronkowski and Allen were constantly chipping the edge rushers especially Khalil Mack on their way out in the pattern and that can’t be overlooked.

Allen had a couple of catches, made several nice blocks in the running game but his biggest play was his fumble recovery after Rex Burkhead was stripped on the Pats opening drive, keeping the drive alive. On a day where the wide receivers were the focus, the tight ends were plenty good enough

The offensive line was missing two starters, right tackle Marcus Cannon and center David Andrews and they never missed a beat. LaAdrian Waddle at RT had help by the tight ends chipping Mack but held up very well once again. Ted Karras who had never played center before stepped in for Andrews and was outstanding. On what was should have been a mismatch for the Raiders turned out to be a position of strength for New England. Brady was sacked just once. The run blocking was pretty solid all day as well.

The Patriots defensive line got pushed around in the running game as Marshawn Lynch was off to his best start of the season, but thanks to the offense getting off to a big lead, it didn’t come back to haunt them. The Raiders were getting a good push inside in the running game. Lynch had a 25-yard run where Cassius Marsh was sealed outside and Lawrence Guy got pushed back inside allowing a big seam for Lynch to exploit.

The pass rush was non-existent for most of the first half but got a bit better later in the game. It is definitely an area that needs to improve. The Patriots must lead the league in “almost getting there” in pass rush situations

The linebackers weren’t bad on Sunday but weren’t great either. David Harris and Kyle Van Noy both missed a few tackles in the running game although Van Noy looked good on a speed rush and got a sack of Carr. Elandon Roberts did a much better job in coverage this week and that is a positive sign. Marquis Flowers saw action on third down and showed great awareness on the play at the end of the first half. He punched the ball out of WR Seth Roberts’ hands who was carrying the ball way too far from his body.

Malcolm Butler countered one of his worst games last Sunday with one of his best against the Raiders. Butler drew the talented Amari Cooper this week and basically rendered him a non-factor. Cooper had three catches for just 28 yards and a garbage-time touchdown when the score was 30-0 in the fourth quarter.

Stephon Gilmore had another very strong game going against Michael Crabtree and he provided very tight coverage all day. His confidence and comfort level in the defense is getting higher every week and other than having to leave for dehydration (along with Amendola) he had an outstanding day.

The safeties were tasked with covering Jared Cook who had been targeted 21 times with 18 catches the three previous weeks. Cooks was targeted five times and made just two catches for 36 yards. Duron Harmon made a great play on a deflected pass for an interception.

The Special Teams had another outstanding game. Stephen Gostkowski hit all four field goals including a personal and team record 62-yarder at the end of the half that would have been good from 72. He also hit kicks from 51,40 and 29 yards. Not wanting to allow the dangerous Cordarrelle Patterson to influence the return game, he boomed all of his kicks out of the end zone except one at the end of the game where the coverage unit stopped the return at the 23. Another win. Ryan Allen punted only twice but pinned Oakland each time. The only minus was the slightly ticky-tack penalty on Van Noy for running into the kicker. Oakland then went for a 4th and 1 and got stuffed but that could’ve turned out differently.

Bill Belichick leaves nothing to chance. And the preparation showed this week had one thinking it was New England coming off of the bye week rather than the Raiders who looked ill-prepared for New England or the altitude.

The Patriots stayed in Colorado to deal with the thin air to prepare for Mexico City and it didn’t seem to affect them much at all. They then tested the Raiders who elected to stay at sea-level by going hurry up and winding them.

The situational football that the Patriots practice so much of during training camp paid dividends at the end of the half. The huge swing and then coupled with a quick touchdown put the game away in the early moments of the third quarter. Josh McDaniels had an excellent game plan and the offensive performance was pretty flawless in carrying it out.

Matt Patricia’s defense continues to improve every week. In the past four games, their opponents are averaging just 217.7 yards per game passing and 11 points scoring. Contrast that with the first month of the season.