5 years ago at 11:00 am ET
Follow @AllThingsPats
Posted Under: NFL Commentary 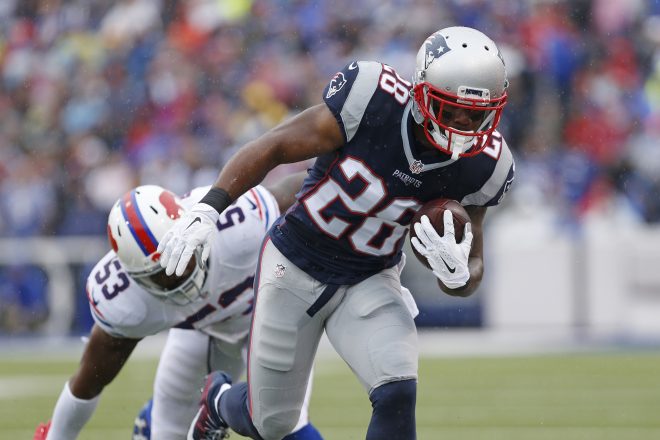 The day kicks off with a matchup of division leaders, a rarity in the early time slot. The 7-2 Rams have won four straight and bring their top ranked offense (32.9 ppg) to Minnesota. The 7-2 Vikings have won five in a row and are allowing just 18.3 points per game. Minnesota is listed as a 2½ point favorite.

The Patriots and Raiders renew their decades long rivalry in the late afternoon time slot. New England puts a five game winning streak on the line in their second consecutive game on the road at high altitude. The Patriots need a win to keep pace with Pittsburgh for the best record in the AFC, and to maintain their two game lead in the AFC East. 4-5 Oakland has been inconsistent this year but still possess plenty of talent on offense. The Raiders need a victory to keep hopes of winning the AFC West alive.

Sunday night has a good game with Philadelphia at Dallas. The Eagles own the NFL’s best record at 8-1, and have a league-high seven game winning streak. The 5-4 Cowboys need a win to stay in contention for a wild card spot, as nine other NFC teams have at least five wins. With all that has been happening off the field for Jerry Jones, a victory would be sweet. The Jerrah now knows first hand with what it is like to be on the wrong side of Roger Goodell’s erratic system of lies punishment.

Week 11 wraps up with a good game on Monday Night. 5-4 Atlanta travels to Seattle to play the 6-3 Seahawks. The defending NFC champs are in third place, two games behind New Orleans. The Falcons need a win here to not only stay close in the NFC South, but to just keep up as a wild card contender. Seattle is only one game behind the Rams in the NFC West but they have bigger issues. The Seahawks will be without Pro Bowl CB Richard Sherman (ruptured Achilles’ tendon) and Pro Bowl SS Kam Chancellor (neck stinger).

For a full list of announcers and to see what games are being broadcast in your are, please check JP Kirby’s 506 Sports.

The Bears continue to find a way to lose close games. Mitch Trubisky has a bright future but right now he’s going through the growing pains of being a rookie quarterback on a bad football team.

How much of a distraction will the Uber allegations against Jameis Winston be for the Bucs? This game comes down to which CB gets burnt more badly, Miami’s Xavien Howard or Tampa’s nickel duo of Javien Elliott and Robert McClain.

Most of the talk has been about Jared Goff and the #1 LA offense against a tough Viking defense. The Rams are well balanced, with Aaron Donald leading the way in Wade Phillips’ defense. LA is allowing just 18.0 points per game and has forced 19 turnovers. Keep an eye on Viking WR Adam Thielen. The D-2 receiver has five games with at least 90 yards receiving, and at least five receptions in all nine games.

The Saints are playing well in all three phases of the game. The offense is far more productive with more emphasis on the running game, keeping opposing defenses off balance. Net result is a 7-game winning streak, tied with Philadelphia for the longest in the NFL this season. Make that eight straight over the injury depleted Skins.

You want to know why ratings are down? Games where the starting quarterbacks are Tom Savage and Drew Stanton may have something to do with that.

Remember when preseason prognosticators were predicting that the Giants would win the division and contend for the Super Bowl? Now Big Blue is a double-digit underdog at home and instead in contention for the number one pick in the 2018 draft.

Brett Hundley looked awful in his first two games, but was improved last week. Packer RB Jamaal will need a productive day to counter Baltimore’s blitz-heavy defense on a cold (33) and windy (12-25) day.

Jacksonville may be without their top four receivers, so it will be imperative that the Jags get their running game in gear. Jacksonville’s offensive line has performed well this year, with the Jaguars averaging an NFL best 163 yards rushing per game. Cleveland’s run defense has been their lone bright spot. The Browns are allowing an NFL-low 3.1 yards per carry and just 86 yards rushing per game.

Nathan Peterman gets the start at quarterback over benched Tyrod Taylor. Expecting a rookie QB to win on the road in his first NFL start is a tall order, even though the Chargers have virtually no home field advantage.

Denver has lost five straight and Bronco fans are pointing their fingers at everybody, including John Elway. If the Bengal secondary could not cover Tennessee receivers last week, what will they do at Mile High against Demaryius Thomas and Emmanuel Sanders?

Jack Tatum. Daryl Stingley. Russ Francis. George Atkinson. Phil Villapiano. Ray Hamilton. Ben Dreith. Stop whining about the Tuck Rule, Raider fans. You scored six points on your final ten possessions of that game, and failed to stop the Patriots on three of their last four possessions.Pats improve to 19-15-1 all time in this series.

Carson Wentz has thrown 17 touchdown passes against three interceptions in the last five games. Dallas has not been able to contain good quarterbacks and high scoring offenses this year. The Cowboys gave up 35 points in home losses to the Packers and Rams, and 27 points at Atlanta last week.

The Seahawks are in a difficult situation, playing without CB Richard Sherman and SS Kam Chancellor. Seattle does benefit with the return of FS Earl Thomas, and Atlanta RB Devonta Freeman (concussion) is out. This could easily go either way; it’s tough to pick against Seattle at home. Former Patriot Justin Coleman gets the start at corner in place of Sherman.

For a sneak peak at next week’s games, check out NFL Week 12 Early Advanced ‘Look-Ahead Lines: Pats favored by 14.5 vs Miami.