The Patriots game today in Mexico today will be the first game they have played outside the US since they appeared in London in 2012, a 45-7 win over the Rams. This will be the Patriots and Raiders third appearance in the International Series, and the Patriots first in Mexico City. The team did play a preseason game there in 1998.

Just in case anyone was wondering, five teams have not played in the International Series, the Green Bay Packers, Carolina Panthers, Seattle Seahawks, Philadelphia Eagles, and Tennessee Titans.

“Don’t Hand it to Me Buddy, it’s Yours” Lewis Nearly Commits a Gaffe:
Lost in the Patriots dominance on special teams last Sunday night in Denver was a mistake by Dion Lewis that could have been costly but luckily for the team was a non-factor.

When the Broncos kicked off, the ball soared deep into the end zone. Dion Lewis catches it cleanly about 7 yards deep and promptly flips the ball to the official. The issue was, Lewis hadn’t taken a knee yet and the play was still live.

The official, more out of instinct, caught it and promptly handed it back where Lewis took a knee. Had the official let the ball go, things could have gotten interesting especially if the ball had rolled out of the back of the end zone.

Gonna wanna down that one first pic.twitter.com/0fapi7PwA8

Patriots Two Starters on the Offensive Line This Week:
The Patriots were without Marcus Cannon last week in Denver, who had been dealing with an ankle injury and he was ably replaced by LaAdrian Waddle. Cannon is out again this week and will be joined by David Andrews. Andrews was a late addition to the injury report which was characterized as an illness. It was reported that Andrews was suffering from a delayed reaction to the altitude.

In his stead, the team is expected to start Ted Karras this week. Karras could play center or guard. If they move him to guard, they’d slide out Joe Thuney to center.

Belichick Flying High At the Air Force Academy:
The Patriots decided to remain in Colorado after the Denver game for a couple of different reasons. One, that it cut down on the travel time that the team would be forced to deal with. A secondary reason was that it allowed the team extra bonding time on the road, which can never be overlooked and third, perhaps most importantly, with the game today in Mexico City at about 7200 feet above sea level, the air is even thinner than in Denver which is about 2000 feet lower than Mexico City. Coupled with the smog, which at times is very thick, it can be very difficult to breathe there. I spent months there a few years ago and it is a tough place to play football.

But Belichick, who arranged for the team to stay at the service academy which is located 6000 feet above sea level, the location couldn’t have been a coincidence. Belichick grew up at the Naval Academy and has great respect for the military and their traditions. And on Friday, when Mike Reiss of ESPN reported that Belichick watched all 4000 cadets march to lunch, and had the opportunity to address them, he had to be in his glory. Reiss reported that Belichick was presented with an Air Force Academy hoodie by Lt. General Silveria, the Commandant of the Academy. Belichick then presented the general with a Patriots hoodie. Belichick then presented the general with a Patriots hoodie. Reiss stated that Mitchell Hall erupted. 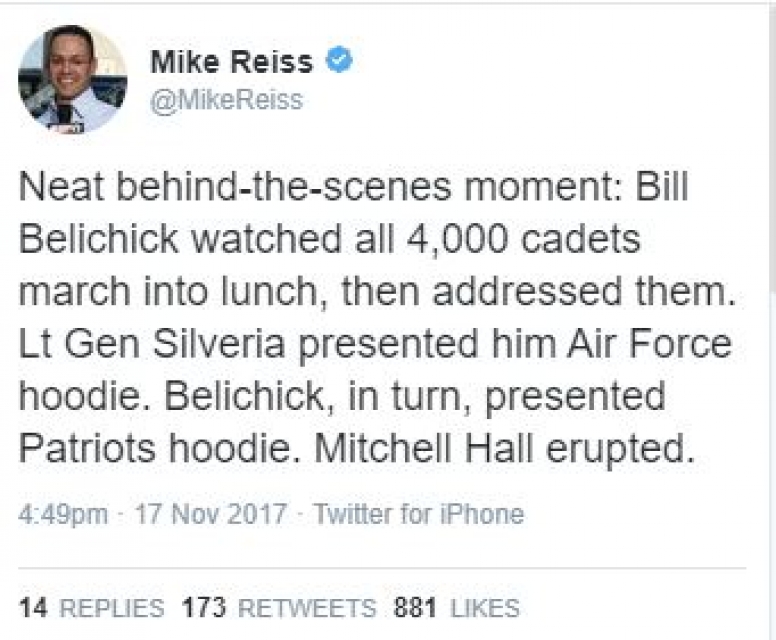 While the trip logistically made perfect sense, I’m sure that Belichick used the time to give the team a tour of the facility and did an impromptu history lesson while they were there.

Mass Native Melifonwu Excited About the Opportunity to Play vs the Pats:
The Raiders drafted Grafton-native Obi Melifonwu in the 2nd round of the 2017 NFL Draft this spring. The big safety put on a show at the NFL Combine and he shot up draft boards. But an injury in training camp derailed the start of his career and began the season on IR.

Melifonwu grew up a fan of the Patriots, players like Kevin Faulk, Troy Brown and Antowain Smith, now he’ll be facing them. He played sparingly in his first action last week against Miami but logged three tackles. He’ll be looking across at TE Rob Gronkowski this week.

“He hasn’t been able to be available for us, but we’re expecting him to step up,” Raiders’ defensive coordinator Ken Norton Jr. said to the media this week. “This is the world champions, the guys who have been doing it really well for a long time. Obi is going to get introduced at a high level, but he’s very confident. We’re expecting him to play at a high level and accept the challenge.”

“I think he’s ready to help us. He’s big, strong, fast and he cares a lot,” Raiders’ head coach Jack Del Rio said. “Hopefully we can get him more involved this week and he can play well for us.”

For the rookie, he knows the assignment is tough but excited for the challenge. “I feel like a lot of people try to out-physical him and it’s just, play to your strengths,” Melifonwu said. “He’s a big, physical guy with strong hands, so it’s definitely gonna be tough. But it’s a matchup that’s gonna be fun.”

Stop Empowering the “Tin-Foil Hat” Wearers:
There has never been a shortage of naysayers on the internet who try to take down the legacy of Tom Brady by repeating the ridiculous notion that he’s a “system QB” and more a product of his coach than anything else ad nauseam. One particular troll has a full-time job on Twitter trying to engage every Patriot fan by twisting around facts to make you believe that Brady really isn’t that good at all. Okay. and just in case anyone was wondering, this guy lives in Western PA and is a diehard Manning apologist.

So while it makes for good ratings by inflaming the masses, stop giving this nincompoop the air time by putting him on the radio. And if you do, don’t act all incredulous at the drivel he spews.

Years ago during the Reagan administration, there was a guy who stood across the street from the White House wearing nothing but black trash bags and would point and yell at tourists that, “Reagan is putting the nation in the trash” amongst other things not fit to print. I don’t remember that guy getting airtime on CNN. Take advice from Bill Belichick, “Ignore the Noise” and quit feeding the trolls.

Next Thursday Detroit over Minnesota, Dallas over the Chargers and Washington over the Giants

Peterman Gets the Start at Bills Quarterback:

The Buffalo Bills made a surprise decision to start rookie QB Nathan Peterman over Tyrod Taylor this week on the road in Los Angeles. Two weeks ago the Bills were making noise about overtaking New England and gaining control of the AFC East. But after two blowout losses in a row, they’re now reeling and Coach Sean McDermott has mixed things up by replacing Taylor who was never the long-term answer anyway.

Peterman was the fifth QB taken in this season’s draft, in the 5th round and the 171st player overall.

With the game out of hand last week, he came on in garbage time and completed 7-10 passes with a touchdown against the Saints. This week, he’ll be leaning on the running game of Shady McCoy and have to do the heavy lifting if the situation calls for it.

With Buffalo still locked in a playoff spot, it is a calculated gamble by McDermott that this will ignite his team. If he struggles and McDermott goes back to Taylor, it could really hurt their playoff hopes and possibly damage the rookie’s confidence. We’ll be watching that one.

Dolphins Season On the Brink With the Bucs This Week:

The Miami Dolphins have lost three straight games, scoring an average of just 15 points per game and losing by a combined 67 points in those three games. They sit at 4-5 and after going 10-6 a year ago are in danger of falling out of the playoff race. If they have any hopes of rescuing a playoff berth they have to beat the 3-6 Buccaneers today.

But it hasn’t just been the offense struggling, the defense has been faltering as well, having given up 112 points in those three games.

A loss will drop them to 4-6 with a road trip to New England next week where they haven’t won since the Wildcat game in 2008. One thing the Dolphins will try to do this week is getting the ball in RB Kenyan Drake’s hands more, especially in space. The speedster from Alabama is electric, as evidenced by his 66-yard touchdown run against the Panthers last week. In the last two games, Drake has runs of 66 and 42 yards. While Damien Williams is technically the starter right now, Drake’s role should see a big increase down the stretch.

Jets During the Bye Week are Sticking With McCown:

The New York Jets are off this week but are surprisingly 4-6 as they hit the bye. They’ve already won more games than anyone would have thought possible and although a real long shot, they still have a chance at making the postseason. Raise your hand if you thought that possible by Week 10.

So despite the slim postseason hopes, the team is not going to throw in the towel and go with young QBs, Bryce Petty and Christian Hackenberg. They’re going to stick with QB Josh McCown, who has played very well this season.

Any further wins may hurt the Jets’ chances of finding a franchise QB in the 2018 NFL Draft, but Head Coach Todd Bowles isn’t concerned with that. He’s got his players focusing on the now and keeping their jobs. Now the only question is, does the front office step in and demand to see what they have in the two young QBs, or do they already feel that the two aren’t going to be the answer?