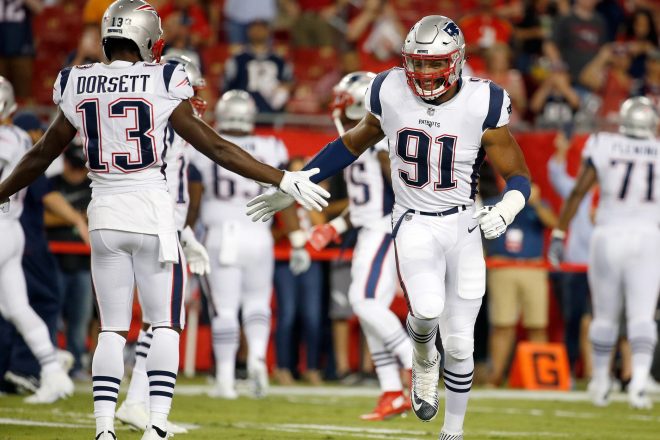 Bill Belichick typically says the same thing every year when discussing the team’s potential success and who it’s going to take to get there.

“We’re going to need everybody.”

That couldn’t be any more true in 2017, where the Patriots find themselves in tough shape as they return to work after their bye.

Prior to the break they lost another important pieces of their offense, with Chris Hogan suffering a shoulder injury late in the game during New England’s win over the Chargers.  Hogan was missing during Tuesday’s practice, and the overall consensus appears to be that the Patriots may be without him out in Denver on Sunday.

That’s going to be tough.  Hogan is tied with Gronkowski for the team lead in touchdowns with five and he’s certainly one of the more versatile weapons in Tom Brady’s arsenal, especially down in the red zone.  He leads the team in red zone receptions with six, which includes five first downs, four of which were touchdowns.

Needless to say, his absence hurts.  It takes away one more bullet from Brady’s gun and having the Patriots without yet one more weapon against Denver’s defense certainly presents a problem.

Let’s not kid anyone, Julian Edelman’s absence has obviously loomed large, and Malcolm Mitchell being sidelined also can’t be overstated either.  Edelman lead all Patriots receivers by more than double in first downs in 2016 and Mitchell actually finished with the same number of first downs (23) and touchdowns (4) that Hogan did last season.  Mitchell also had a lot of success in the red area, with 9 receptions on 12 targets last season with three touchdowns.

As a result, the Patriots have already been playing from behind and thanks to further injuries, they now have even more ground to make up until Hogan can get back into the line-up.  At this time of the season, there aren’t any receivers sitting out there on the street who can come in and make an impact, which means any help that could be coming will need to come from their own roster.

They’ve already got two reasonably talented players who could contribute, although neither has yet to live up to their potential.  Former Colts tight end Dwayne Allen is a player who has clearly under-performed the most in terms of what he’s capable of, having been targeted six times so far but with zero receptions during the first eight weeks of the season.

He did get some praise from Josh McDaniels this week, who also pointed out that while people may not see his contributions on the stat sheets, he’s been doing the right things.

“Dwayne continues to work hard,” said McDaniels. “Again, there’s a lot of ways to be productive. It’s not just statistically in terms of catches or rushing yardage or what have you. There’s a lot of things that happen during the course of plays that allow others to have success. Dwayne’s certainly embraced his role and continues to work hard and give us everything he has in the all the different areas that we ask him to do it in.”

This time last season, Allen had 18 receptions for 207 yards and two touchdowns through eight games.  Another thing worth noting is the fact that over the course of the entire 2016 regular season, he was a reliable target. He never had more than two incompletions out of his total targets, with a completion rate of 67% when he was targeted. 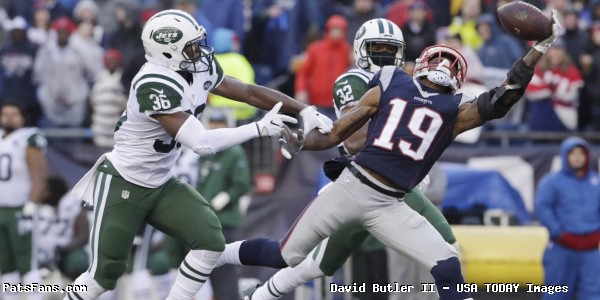 Last season, it was unsung hero Malcolm Mitchell who helped give the offense a boost.

He actually had a productive second half with the Colts last season, catching 16 passes for 199 yards and four touchdowns over his final eight games in 2016.

That’s the type of performance that New England needs, and knowing that they already have someone capable of being an impact player is something that was likely a topic of discussion last week among the coaching staff, who will need to get creative in order to get more production out of the offense.  If he’s able to turn things around, having Allen finally start to settle in couldn’t come at a better time, and McDaniels sounded confident that he’s headed in the right direction.

“Those things will come over time, I’m sure,” said McDaniels. “Again, we have a lot of guys that are out there on every play, and there’s only one guy that’s going to get it on each snap. Like I said, he’s doing a good job in terms of embracing his role and factors into the running game, pass protection, does some other things to help others get the ball and move the football offensively. He’s been unselfish since he’s been here, he’s got a good attitude and we’re glad Dwayne’s here.”

Meanwhile, another player who will also need to give them more is receiver Phillip Dorsett, who joins Allen as a player who is in dire need of kicking things into gear offensively.  Dorsett is no stranger to being productive, having piled up 528 yards on 33 receptions for the Colts in 2016, including two touchdowns.

Yet so far through eight games, Dorsett has just four catches and seems to be a player who is still figuring things out.  There hasn’t been a lot of precision or timing between he and Brady, with most of his targets looking similar to what we’ve seen from Matthew Slater in past years, where Brady is simply heaving the ball down the field in hopes Dorsett will go up and make a play.

That approach hasn’t worked.   Dorsett has just four receptions, and while two of them have gone for over 20-yards, including one of over 30-yards, he’s been targeted eight times.  Given how Brady’s targeting him, it explains why he’s only catching half of them.

Bill Belichick praised Dorsett on Tuesday during his conference call and it’s obvious he believes Dorsett is a player who has the ability to do more for them.  The only question is how they can further work him into the offense, although consistency is going to be the key.  The good news is, Belichick said Dorsett’s been making progress, which is definitely a good sign.

Either way, getting one of these players started is ultimately going to be critical down the stretch, which starts this weekend.  With Gronkowski likely to see double-teams and Danny Amendola and Brandin Cooks also being challenged, it sets up a situation where one of those two players could certainly take advantage.

These next two games are big because after this, New England closes out the season with five of their final six games coming against Division opponents.  These are both games the Patriots really need to get, because their margin for error will likely be slim over the final month as they try and contend for a top seed.

Getting there isn’t going to be easy.  But if either of these two guys can give a boost to an offense that already leads the league in yards-per-game, they’ll be even better off.  As a matter of fact, it could be the difference in determining what potentially happens to this team in January and – hopefully – in February.