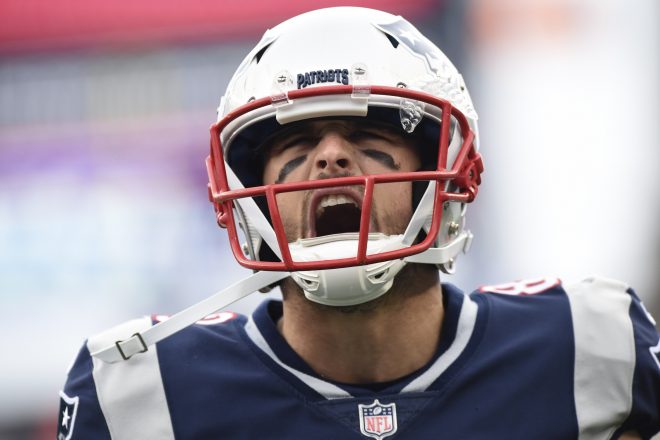 Heading into Week 8’s matchup with the San Diego Chargers, quarterback Tom Brady and the Patriots were seeking a fourth straight win before heading into their bye week.

Things got off to a rough start in the midway through the first quarter, as Chargers running back Melvin Gordon ran for the longest touchdown score ever allowed by a Bill Belichick defense.

HE WILL GO ALL THE WAY!@melvingordon25.

87 yards to the HOUSE. #Chargers pic.twitter.com/mOTI7SKWm9

That 87 yard run by Melvin Gordon was the longest rushing TD the Pats have allowed under Belichick. #WBZ

Needing a response, the Patriots orchestrated a season high 14 play drive that culminated in a Rob Gronkowski Gronk spike to even the score at 7 early in the second.

That 14-play drive was tied for the longest of the season for the Patriots.

Then the Travis Benjamin and the Chargers provided one of the worst special teams errors of recent memory, gifting the Patriots an additional two points on a safety.

This is an impressive synchronized safety call by the back judge and side judge #rhythmnation pic.twitter.com/6Iezshism4

This is the worst punt return in football history pic.twitter.com/aixbCFXdMC

Travis Benjamin just ran into a safety. Not a player on defense that’s a safety. Literally ran himself into giving up 2 points on a punt.

Patriots have had 43 snaps on offense in first half, which is high total. 1 of 3 in red zone keeps point total down. Patriots 15, Chargers 7

With the Patriots unable to put the game away in the second half, Benjamin redeemed his safety miscue with this touchdown reception to close the gap to within five at 18-13 in the fourth quarter.

Tom Brady goes over 300 yards for the 81st time in his career and 5th time this season, matching his 2016 total. #LACvsNE

With 1:08 to play in the fourth, Stephen Gostkowski nailed a 26 yarder to put the Patriots up eight at 21-13 but Chargers quarterback Phillip Rivers was unable to drive down the field to force overtime.

The Patriots would hold on a win by a final score of 21-13 to head into the bye at 6-2 and sole possession of first place in the AFC East.

The #Patriots Week 8 win, by the numbers: pic.twitter.com/JeWHYFOaY3

Tom Brady has had Philip Rivers' number in their head-to-head rivalry. Sunday's win improved Brady to 7-0 vs the #Chargers QB & a spot here pic.twitter.com/aUlJYkHkF7

Families are like branches on a tree we grow in different directions yet our roots remain as one! #brothers #nephew #missingafew

Great weekend seeing a bunch of friends and win for the team!

Sounded like Rodney buddy on tv was mad we at 6-2… let's go pats nation! Another dubbbb!