5 years ago at 9:47 pm ET
Follow @bob_george
Posted Under: Uncategorized 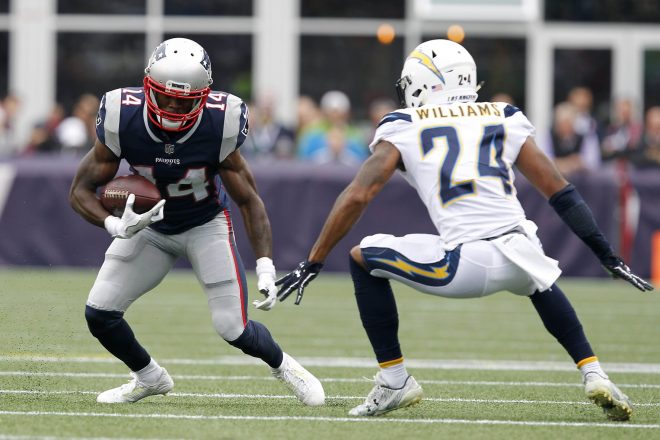 FOXBOROUGH – The best time to get a bye week is right smack dab in the middle of the season, and it happened just like that to the Super Bowl champs.

Eight games down eight to go, the Patriots lead the division and are right there among the conference leaders. They have done it despite going through defensive growing pains, key injuries and facing teams who played their best game of the season against the champs. What began as a possible second run at a perfect season, morphed into a possible lost season, and has emerged as a typical season, the 2017 Patriots are 6-2 at the bye week, and can now sit back for a while, heal some injuries, head to the computers and dial up some more fodder for Do Your Job flicks, and look forward to the most difficult part of their schedule.

The Patriots completed the first half of their 2017 campaign with a 21-13 conquest of the Los Angeles Chargers (and it is still strange to put “Los Angeles” in front of “Chargers”, and will probably remain strange in perpetuity) on Sunday at Gillette Stadium. Tom Brady did throw for 333 yards and a touchdown, but most of his passes and yardage went to running backs. On seven occasions the Patriots drove either to or inside the Chargers’ 25-yard line, but came away with only one touchdown, three field goals and two missed field goals.

The defense and special teams were more than equal to the task. Philip Rivers managed only 212 passing yards and a touchdown. Take away Melvin Gordon’s 87-yard touchdown run in the first quarter, and Gordon finished with 45 yards rushing on 13 carries and a 3.5 average per carry. On a second quarter punt, Travis Benjamin muffed the catch at the Charger 11, then retreated into his own end zone before Brandon King tackled him just before coming out of the end zone for a safety and a 9-7 Patriot lead. Stephen Gostkowski missed on two 43-yard field goals, but his kickoffs are still impeccable and the average drive start of the game for Los Angeles was their own 20.

With this being the halfway point of the season, here is a quick synopsis on all the positions for the Patriots, and projections going forward.

What’s good: Almost everything. Brady does not look 40. He is on pace to break 5,000 yards passing this year. What’s not good: When his offensive line is not having a good day, forcing Brady to hurry throws and absorbing big hits. He also needs his receivers to stay healthy, as now Chris Hogan is an injury concern with a shoulder injury on Sunday. Going forward: Only question marks with Brady revolve around health, his own and his key weapons.

What’s good: Nobody will get tired. Lots of work to share with Dion Lewis, James White, Mike Gillislee and Rex Burkhead. Nobody here will gain 1,000 yards, but in 1978, when the Patriots set the team record for rushing yards in a season, nobody gained 1,000 yards that year either. What’s not good: Gillislee still sometimes can’t get the tough short yards, the one thing he is mostly responsible for. Burkhead has to stay healthy. Lewis loves the twist moves, but that could fell him along the way. Going forward: Gillislee needs to watch some “(LeGarrette) Blount force trauma” film and take notes.

What’s good: Rob Gronkowski is still not yet on injured reserve, and when Brady has the time, he and Gronk are still the best such tandem in the NFL. This group is still deep, such that it can sustain all these injuries and things are still solvent. What’s not good: Julian Edelman is missed, to the point that he perhaps is more needed on this team than Gronkowski. Malcolm Mitchell is sorely missed also. Brandin Cooks is still not in full synch with Brady. Phillip Dorsett isn’t setting the world on fire. Going forward: Cooks needs to start scoring touchdowns and running up receiving yards. Injuries at some point need to abate. Brady is in deep trouble if the 2017 version of Austin Collie has to play.

What’s good: Dante Scarnecchia has to be arguably the most revered assistant coach in team history. Never mind his long tenure, he has restored order on the o-line. With his return comes a good deal of continuity with much the same bunch from last year. What’s not good: Still some inconsistency at times, mostly in pass blocking. Some think this may be Nate Solder’s last year. Going forward: Scarnecchia simply needs to keep these guys focused on the big prize and to help them jell and protect The Franchise. Marcus Cannon was hurt on Sunday against the Chargers, which could be a concern if La’Adrian Waddle has to play a lot of snaps.

What’s good: At times, some outstanding moments from Trey Flowers, Malcolm Brown, Deatrich Wise Jr. and Alan Branch. While they are not getting after the quarterback, they are becoming much more stout against the run. What’s not good: Branch has to stay out of Bill Belichick’s doghouse. He cannot afford to become the next Jabaal Sheard. The demise of Kony Ealy in Foxborough is still maddening. Going forward: Stay healthy, maintain gap integrity and somehow find a way to get pressure on the quarterback.

What’s good: Belichick could get into the Hall of Fame simply based on his usage of linebackers. He can jettison Chandler Jones and Jamie Collins, he can watch Jerod Mayo and Rob Ninkovich retire, he can lose Dont’a Hightower for long stretches and things are still okay. Not great, but okay. Kyle Van Noy has come of age this year, and he now takes over for Hightower in quarterbacking the front seven. What’s not good: Hightower has to take better care of himself. Cassius Marsh needs to learn the defense quicker, but he’s better than Week 1. David Harris cannot age as quickly as he appears to be. Going forward: Ninkovich is not walking through that door, fellas.

What’s good: Johnson Bademosi has been a pleasant surprise. If you remember Earthwind Moreland from 2004, Bademosi has been somewhat like that, and more. Generally the safeties have been good to very good, better as of late, but they are most responsible for any communication breakdowns that went on over the first four weeks. What’s not good: It’s not good that Stephon Gilmore goes down with an injury and Bademosi plays like he is an upgrade. Malcolm Butler still at times looks shaken from his adversely noteworthy offseason, but he has improved as of late. Going forward: Gilmore may be fantastic if he is “dialed in” on one guy, but he cannot afford to become another Adalius Thomas. Eric Rowe needs to heal up quickly.

What’s good: Anything not related to scoring. What’s not good: Gostkowski is back to placekicking yips again. You cannot sit there and feel confident if his field goal ties or wins the game for you. Going forward: Belichick should bring two or three kickers into camp, not with the intent on replacing Gostkowski, just to get into his head and make him focus better.

What’s good: Belichick needs one win to tie, and two wins to move ahead of Tom Landry into third place in wins (regular season and postseason) among head coaches in NFL history. Only George Halas and Don Shula will remain ahead of His Hoodiness. What’s not good: Reporters who still manage to ask the coach dumb questions in press conferences. Going forward: With the trading deadline also occurring before the next Patriot game, Belichick needs to exercise due prudence before he comes up with the next Jamie Collins. One of these days Belichick will release or trade a player who really and truly cannot be replaced.

READ NEXT:
Win Accomplishes Rare Feat For Brady Over Rivers
Posted Under: Uncategorized