With the Atlanta Falcons set to visit Gillette Stadium on Sunday night in a Super Bowl rematch from February, it’s hard not to reflect on a season that ended with an improbable fifth championship for Bill Belichick’s football team.

While Sunday night’s game will continue to be referred to as a rematch, everyone knows that the reality of the situation is it’s really not even close. New England won the game that really mattered and the one that likely still haunts Matt Ryan and the Falcons. Win or lose this weekend, this one will merely count as just another forgettable regular season game against a non-conference opponent.  But the victory in February went down as one for the ages, putting the icing on the cake of a season that was a story in and of itself.

Veteran writer Christopher Price captured it all in his book, “Drive For Five”, which chronicled the “Remarkable Run of the 2016 Patriots” and their journey over the course of last season.  The foreword leads off with some terrific insights from safety Devin McCourty, who reveals that that team began to believe they had something special in mid-December when they had to play Baltimore in a Monday night game before having to fly to Denver on a short week.

“Thank you, NFL,” wrote McCourty, noting the rough hand they were dealt at the time.

He goes into the experience from there along with the Super Bowl preparation and how hard they worked heading into the game, giving fans an inside look at one of the most memorable games in franchise history.

It’s a great way to begin, with Price picking things up from there and telling the story going back to the beginning, leading all the way back to the AFC Championship loss in Denver that lit the fire and began the drive and burning desire for what eventually became a special group of players who overcame an incredible amount of adversity to win a championship. 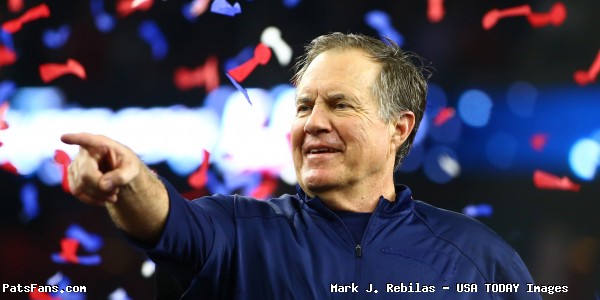 Belichick and the Patriots 2016 run was remarkable.


Price takes us through the offseason that proved to be the building blocks that helped set the stage after all the personnel changes coming off that AFC Championship loss leading into the preseason, which was the other obvious story of its own given the dynamic of Tom Brady’s suspension.  It was the “Summer of Jimmy”, with Price reminding everyone of the first exchange with Belichick after the announcement of how they planned on handling it.

That was the infamous exchange with a frustrated Belichick uttering, “Jesus Christ”.

It goes week by week, touching on every little detail and little moment that most fans had likely forgotten about.   There are so many quotes and forgotten sound bytes, so many events painted in a perfect picture that builds up through the preseason and into each game as it all unfolds all over again, helping fans relive each contest and every memorable play week-to-week.

One period that stood out was the three-game stretch in late November where they won three games in twelve days, which to Belichick, defined the team.

“I think [that period is] a good example of what kind of team this is,” he said.  “They’re tough.  They’re physical.  And they just grind it out.”

That quote kicks off a terrific chapter, chronicling that stretch, and then through the end of the season.

From there, it all begins to build again, and as the playoffs unfold, there are plenty of other little tidbits.

“I mean, [expletive], I don’t know.  I like cake a lot, and every time I get a new slice, I’m just as happy.”  That was Martellus Bennett, when asked how the Patriots have been able to maintain their passion after so many trips to the postseason after the last dozen years.

And there are so many more throughout the book where you feel like you’re standing right there, reliving the magic with the players in the locker room.

The storytelling by Price is captivating through their incredible run, and it includes a terrific afterword by Matthew Slater talking about the deep and unbreakable bond the team had.

It was a special year with so many compelling stories and the fact he was able to capture every single detail is just remarkable.  He did an amazing season justice and it’s a book that you can’t put down, pulling you deep into the journey that ended with the fifth championship in franchise history.

It’s a piece of history that any fan should definitely own and certainly one of the best football books you’ll ever read.  For now, it’s a new season and what happens Sunday Night will eventually be forgotten.  But what happened in February is something none of us will ever forget, and the journey Price takes you through will certainly make sure that everyone will remember every single detail forever.

You can purchase it on Amazon here: Drive for Five: The Remarkable Run of the 2016 Patriots