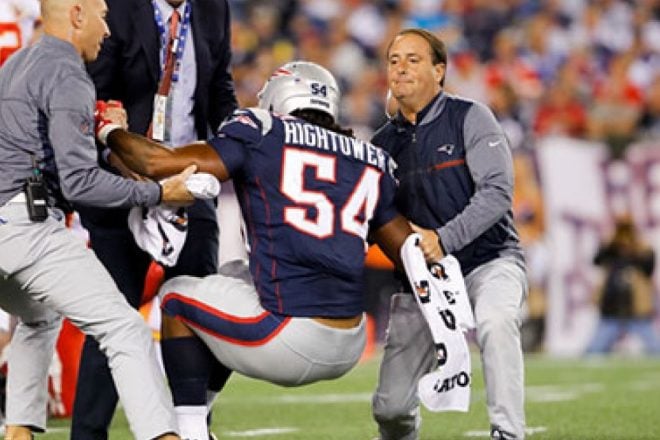 With the 2018 NFL Draft in the books, when it comes to the Patriots, the more things change, the more they remain the same. Bill Belichick is the master at doing the opposite of what people expect him to do and once again he remained true to his principles.

Belichick has made it abundantly clear that he will not draft according to need if he doesn’t feel the value was there for the team in terms of fit or ability. He made it very clear his feelings on that just prior to the draft.

“The whole draft-need thing is… I don’t really understand that. You put a card up on the board. That doesn’t mean the guy is a good player. I think it’s important to acquire good players wherever they are. If you take a player at a position that you might so-called ‘need’ but he’s not good enough to fill that need, then it’s a wasted pick. So I don’t understand the whole need thing. I understand player value, and that’s what we try to go by.”

Down the stretch and into the playoffs the Patriots defense, specifically, the front seven didn’t strike fear into the hearts of anyone. They had a pronounced lack of depth at edge rushers and a dearth of speed and athleticism at linebacker. The prevailing thought was (and not just here) that the Patriots would address these needs early in the draft. They didn’t.

Once a few of the top edge rushers and linebackers went early in the draft, including Alabama’s Rashaan Evans who the team reportedly wanted, the Patriots didn’t look for any in the first four rounds, not believing the ability was there. In fact, their first three draft picks were a tackle, running back and a cornerback. Coincidentally, and despite what Belichick said about drafting for need, their biggest free agent losses? You guessed it, a tackle, running back and cornerback.

While we thought here that were plenty of players that could help the defense, Belichick and Nick Caserio balked. The took a linebacker in the 5th Round at #143 but he is hardly the speedy, athletic type we all clamored for. Ja’Whaun Bentley is a throwback to the 2003 era. He’s a big, 6’2, 260-pound sledgehammer. A two-down run stuffer but hardly a coverage guy. Christian Sam taken at #178 is more in line with that type of player. So what is the plan for the defense?

Belichick obviously feels the defense will be best served by getting back its own players. First of all, the team will be looking from within this year. They get Dont’a Hightower, Derek Rivers, Harvey Langi and Vincent Valentine back from injuries. Hightower and Langi could be asked to move back to the linebacker position. Rivers is seen here as a hybrid edge rusher/outside linebacker. The team picked up Adrian Clayborn and DT Danny Shelton during free agency and corner Jason McCourty will definitely help the depth of the unit. 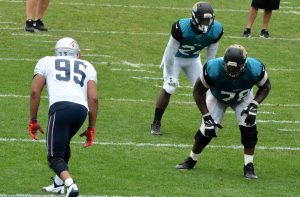 Derek Rivers will be looked to for big things in Year 2 but his first after going on IR in training camp last year. (SBalestrieri photo)

With these added pieces, the defense, and specifically the front seven will look vastly different. Factor in that both Deatrich Wise and Adam Butler will each have a second season to further their development. Belichick always says the biggest development for players is between Years 1-2.

And of course, the team could still try to swing a deal with another team to make a trade for a veteran player early this summer or sign a free agent. Now that the draft is over, any veterans can scan the rosters and see where their best fit may be.

With everyone returning healthy, Rivers may probably be the most watched guy on the defensive side of the ball this summer.  The light was just starting to come on for the rookie when he went down with an injury that forced him onto IR. The defense could look vastly different than the one they fielded at the Super Bowl if the Patriots put Hightower back at the Mike with Rivers and Kyle Van Noy as outside backers, Adrian Clayborn and Trey Flowers at defensive end and Danny Shelton and Malcom Brown inside.

Some of the other guys can be used for depth and Rivers and Hightower can be moved around and play either upright or down as edge rushers. A few of the UDFAs may make a splash. A couple of the intriguing names for front seven include DTs Frank Herron and John Atkins and DE Trent Harris. Harris is a bit undersized but displayed a lightning quick first step while playing for Miami.

While the draft didn’t play out as some envisioned, (raises hand) the team obviously didn’t value the players available. While I certainly believed that a lot of guys between #56 and #143 were capable of helping the defense, Belichick did not and he’s got a little more experience building defenses. Is it time for minicamp yet?