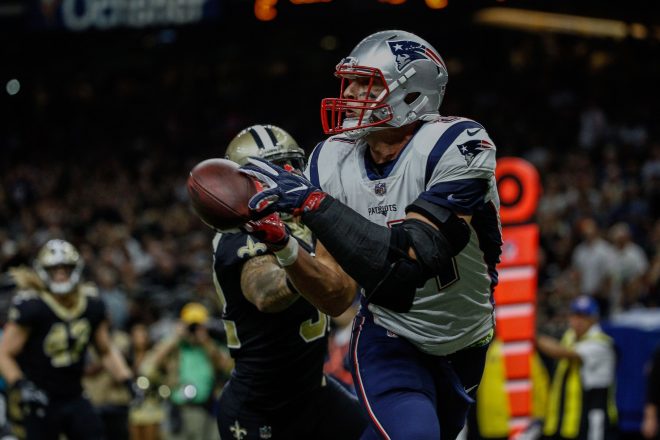 Rob Gronkowski’s groin injury will likely be one of the biggest topics of discussion for this week, but if he’s not on the field this Sunday against the Texans, Tom Brady and the offense may find themselves back in the situation they were in during week one.

However, on Sunday against the Saints, it was a completely different story.  Brady completed 6-of-7 for 107 yards and 2 touchdowns

But the biggest thing that sticks out is the fact that Brady is perfect when targeting Rob Gronkowski on third down this season, completing 5-of-5 passes for 109 yards and five first downs, including a touchdown.

Gronkowski was targeted 14 times in 2016 on third down with 9 catches prior to his injury last season, with all of those receptions good for a first down, including one touchdown.  So of the last 14 passes Brady has completed to Gronkowski on third down, every one of them has moved the chains or lead to two Gronk spikes.

Newcomer Brandin Cooks has yet to get on the same page with Brady when it counts thus far, with Brady 0-of-3 targeting Cooks on third down.

As a result, Gronkowski’s potential absence, especially given their current situation with all the receiver injuries, leave the Patriots in a tough spot heading into this week.  According to reports on Monday, the veteran’s injury isn’t believed to be serious.  But if he’s not available, how they’ll be able to overcome his absence will unfortunately be a something to watch for this week.

To no one’s surprise, Bill Belichick had little to say about Gronkowski’s status during his conference call on Monday,

“I don’t have any updates,” said Belichick.  “We’ll put the injury report out on Wednesday like we always do and follow the procedures that are outlined by the league.”