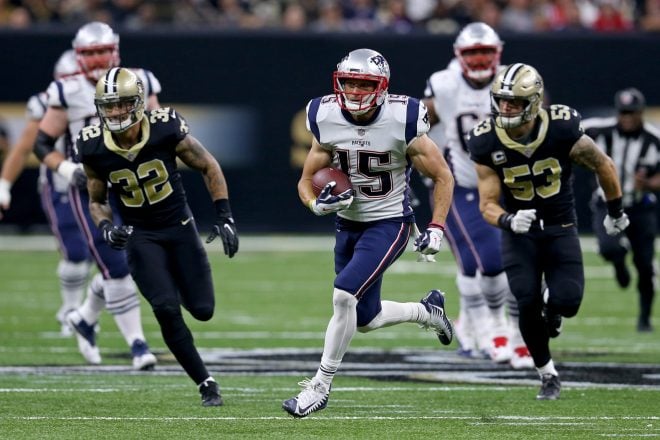 Heading into Sunday’s Week Two matchup with the New Orleans Saints, the New England Patriots were seeking to rebound following the surprising loss at home to the Kansas City Chiefs to open the season.

The game featured a rare head to head between two of the games greatest quarterbacks of the new millennium in Tom Brady and Drew Brees, with Brees owning a 3-1 record against Brady coming into Sunday.

In the first quarter, the Patriots offense came out firing on all cylinders as for the first time in Brady’s career, he threw for three touchdown passes in the first period, the first of which to new running back Rex Burkhead.

Tight end Rob Gronkowski, who was lost for the season after Week 8 a year ago with a back injury, returned to his rightful place on the football field after hauling in his first touchdown pass off the season, with a thunderous spike to cap it off. It was Gronkowski’s 69th career receiving touchdown.

With 21 seconds to go in the quarter, Brady connected to Chris Hogan to expand the lead.

The quarter closed with an eye popping stat line for the 40 year old quarterback and  not a cliff in sight.

Tom Brady has thrown 3 TD in the first quarter for the first time in his career (273 games, including playoffs)

How do you know Gronk is feeling it this afternoon? The hips are gyrating! So much for sad Gronk. #Patriots pic.twitter.com/3Mf7scHqX1

After one quarter of play the Patriots led 20-3.

In the second, Brees got the Saints their first touchdown of the game with a quick drive downfield to cut the lead to 10 at 20-10 and then looked on the verge of scoring again before cornerback Malcolm Butler made a key pass breakup to force a field goal.

The Patriots needing a response with the score down to 7 at 20-13, Brady took advantage of the Saints struggling defense and got into position for Mike Gillislee inside the red zone for his fourth rushing touchdown of the season.

Mike Gillislee with 4 rushing touchdowns, not even 6 quarters into the season.

The Patriots would tack on a field goal just before halftime after executing the perfect hurry up field goal unit to get the kick off before the clock expired.

The Patriots had 16 seconds and no timeouts remaining to get the job done.

How many teams get this field goal off? Brady tackled with 16 seconds left in the half. #Patriots pic.twitter.com/HGNY8oQhCM

The fire-drill field goal the Patriots ran at the end of the first half took a total of 14 seconds from tackle to snap. Impressive. pic.twitter.com/zufhntpQ6S

Former Patriots wide receiver Dont’e Stallworth shared some insight into just how the team prepares for these types of situations.

That's Belichick all day right there. The Patriots work on specifically that situation all the time. No TO's, run off the field for FG unit.

The little things get you a perfectly executed play and 3 pts headed into the locker room at the half. That was routine for the Pats.

No one simulates game situations in practice better than Belichick. He works on it constantly so that it's second nature when it's live.

Perfect field-goal operation with the running clock to end the half. The Patriots practice that almost every single day.

Tom Brady has 19 completions in the first half today

In the second half, the scoring frenzy died down significantly as the Patriots offense could only muster two additional field goals in the third and fourth quarter as multiple pieces to the attack got banged up with injuries, most notably this scare with tight end Rob Gronkowski.

What first appeared to be his back, was later clarified as a groin injury, Gronkowski didn’t return as a precaution.

With Dorsett now in tent, only Patriots healthy receiver is Brandin Cooks. The injuries are epidemic at this point.

Of course Twitter acted accordingly to the increasing injury news.

Despite players dropping like flies, the Patriots defense continued to clamp down on the Saints offense, allowing just one “garbage time” touchdown with five minutes to go in the fourth quarter.

The Patriots would overcome the injuries and win in convincing fashion by a 36-20 score as they earned their first win of the 2017 season.

Tom Brady joins Warren Moon as the only QBs age 40-or-older in NFL history to pass for at least 400 yards and 3 TD in a game (@EliasSports).

Tom Brady sets NFL record for most games with 3 TDs and 0 INTs, breaking a tie with Peyton Manning. That's 52 games.