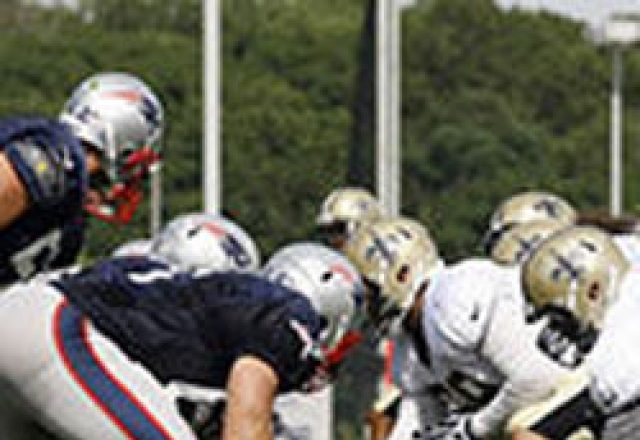 The New England Patriots find themselves in unfamiliar territory after the first week of the season at the wrong end of a 0-1 record. To even things up, they have to travel to the New Orleans Mercedes Benz Superdome where the Saints are always tough to beat. The Saints are also 0-1 and like New England didn’t play particularly well on Monday Night. Now with a short week, they return home to face a Patriots team that is looking to rebound in Week 2.

This week’s game will be broadcast by CBS on Sunday, September 17 at 1:00 p.m. ET and can be seen on WBZ-TV Channel 4. Jim Nance will handle play-by-play duties with Tony Romo as the color analyst. Tracy Wolfson will work from the sidelines. The game will also be on the Patriots flagship radio station 98.5 The SportsHub with Bob Socci and Scott Zolak on the call.

The Patriots (0-1) lost to the Kansas City Chiefs 42-27 giving up 21 unanswered points in the 4th quarter. The defense struggled and gave up the most points and yards ever allowed by a Bill Belichick coached Patriots team.

The Saints (0-1) lost to the Minnesota Vikings 29-19. The offensive line struggled to protect Drew Brees and the defense gave up big plays on third down and had communication issues in the secondary. Not exactly unheard of on Week 1 with a young defense.

We here at PatsFans.com are continuing our “Razor’s Edge” column in 2017 to give a quick break down on some of the key matchups of the game and what you can look for in how the game plays out.

The Patriots and Saints have met thirteen times in their history dating back to 1972 with the Patriots holding a 9-4 advantage including 4-1 in New Orleans. The last meeting was in Foxboro in 2013 when Tom Brady hit Kenbrell Thompkins with a game winning touchdown with less than a few seconds left on the clock to pull it out 30-27.

The Patriots running game is still looking to get untracked but did have a bit of success running the ball last week. Although stopped twice on 4th and 1 attempts, Mike Gillislee scored on three short yardage touchdown runs from 2,2, and 1 yard out.

The Saints did a pretty good job of stuffing the run last week against Minnesota holding Adrian Peterson and Co. in check. Cameron Jordan is their best pass rusher and a very good run defender.

Look for the Patriots to spread them out and run Rex Burkhead in between the tackles this week. I expect to see him get plenty of work in the passing game as well. Gillislee will be the designated goal line/short yardage back.

The Patriots passing game was very lackluster last week, Tom Brady completed only 16-36 for 267 yards with no touchdowns and no interceptions. The Patriots were trying to stretch the field last week going deep vertically much more than they’re accustomed to. They have to get back to stretching the field horizontally this week.

The Saints have a young and talented secondary but they’re not ready yet. They had multiple breakdowns and communication issues in Week 1. They also struggle to cover the tight ends which should be a big matchup nightmare for them this week.

I’m looking for Brady to get the tight ends involved early and often this week. Even with an injury depleted wide receiver corps, Brady still has plenty of weapons to go to. Rob Gronkowski and Dwayne Allen should be primary targets early in this one. Look for Josh McDaniels to get the running backs more involved in the passing game this week. As long as the offensive line gives Brady time to throw, he should find plenty of space to work in this week.

Next up the New Orleans offense:

The Saints barely used Mark Ingram who rushed for over 1000 yards last year. And neither was Adrian Peterson who they signed this spring as they went with rookie Alvin Kamara who played well And after Peterson yelled at head coach Sean Payton late in the first half of his first game as a Saint, his time there may be short.

The Patriots played in a dime for most of the game last week with Jordan Richards as a linebacker and were gashed by the run. They allowed 185 yards and 6.9 yards per run. This week’s game should see them change that up quite a bit as that strategy plain didn’t work. Look for the Patriots to be much better against the run this week.

Drew Brees struggled in the opener because of issues with his offensive line. But he has a very good wide receiver in Michael Thomas and a burner in Ted Ginn as well as TE Coby Fleener. If Brees gets time to throw, he can pick apart any defense.

The Patriots were gashed in the passing game as well, this secondary is much too talented for that. Look for the Patriots to go to the Big Nickel this week, with Pat Chung as the extra linebacker. Harvey Langi should see some action this week. The key will be the pass rush against a beat up New Orleans offensive line. Look for Trey Flowers to have a nice game this week putting pressure on Brees.

The Patriots special teams lost their punt returner when Danny Amendola went down with a concussion. That’s three punt returners and counting that have been lost so far this season. The coverage units and kicking game were solid last week. The kickoff return team was stuck in neutral.

Bill Belichick raved this week about Thomas Morstead this week, (he loves his punters) and he’s one of the better ones in the league. Their kicking game with Wil Lutz had a solid week, but the Saints allowed five kicks to be blocked last year. Look for the Patriots to try to get one this week.

This one should be an entertaining one as two of the best quarterbacks in the league get together. Both have enormous respect for one another and both are ultra competitive who leave it all out on the field. The Patriots defense has some issues to work out or else Brees could have a huge day. Likewise, the Patriots offense, even with banged up WRs should have their way with this young defense.

This has the potential to be a shootout. But I like the Patriots to take control of this game with a much better effort defensively. It starts with the run defense and Alan Branch and Malcom Brown inside. Ditching the four-safety look this week should really help. Look for Trey Flowers and Deatrich Wise to put some pressure on Brees against the younger tackles.

Offensively, if the Patriots don’t score between 30-35 points I’d be very surprised this week. A look at what Minnesota was able to do with a much less talented offense sets the bar this week. And it starts with Rob Gronkowski. Gronk had to hear the entire, “he can’t run anymore”, “he’s lost a step”, take your pick. He’s in line for a huge game this week. Brady will spread them out and find his mismatches. It may be newcomer Phillip Dorsett against nickel corner De’Vante Harris, who was picked on by the Vikings on Monday night. Look for the Patriots to rebound and play a much better game in New Orleans. Time for the fan base to come in off the ledge.