With Julian Edelman out of the line-up Thursday night, Tom Brady needed someone else to help get his team going, and he got what he hoped for until an injury took him away.

Danny Amendola was the player who stepped up in a big way, with he and Brady connecting on six of Brady’s seven attempts for 100 yards, including four catches of 15+ yards.  Three of those receptions went for over 20, and five of his six receptions each produced a first down.

But Amendola was lost late in the game after suffering a “head injury”, with reports saying he was in the concussion protocol.  That was big, because Amendola appeared to be a large part of the game plan and the offense came to a screeching halt after his departure.

Also lost Thursday night was Dont’a Hightower, who suffered what at the time appeared to be a scary knee injury after getting his knee caught underneath a defender and having it badly twisted.  He was later spotted on the stationary bike, which was encouraging and at least gave some hope that the injury isn’t significant. 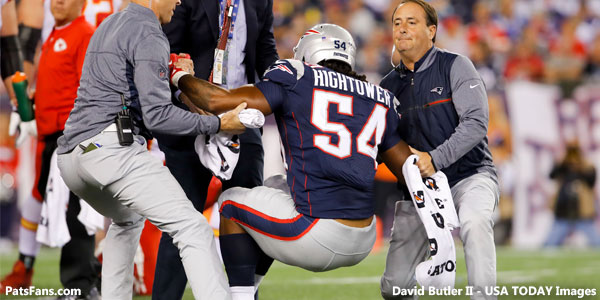 Needless to say losing the remaining two key pieces on both sides of the football were significant and certainly didn’t help.  They’ll be two giant question marks heading into next week’s game in New Orleans, which will likely be another big test as the team tries to bounce back next Sunday, 9/17  at 1:00pm.